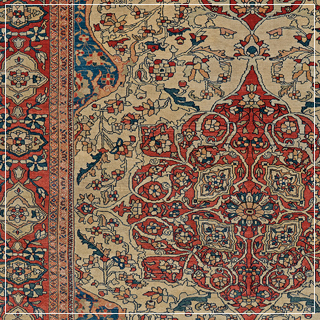 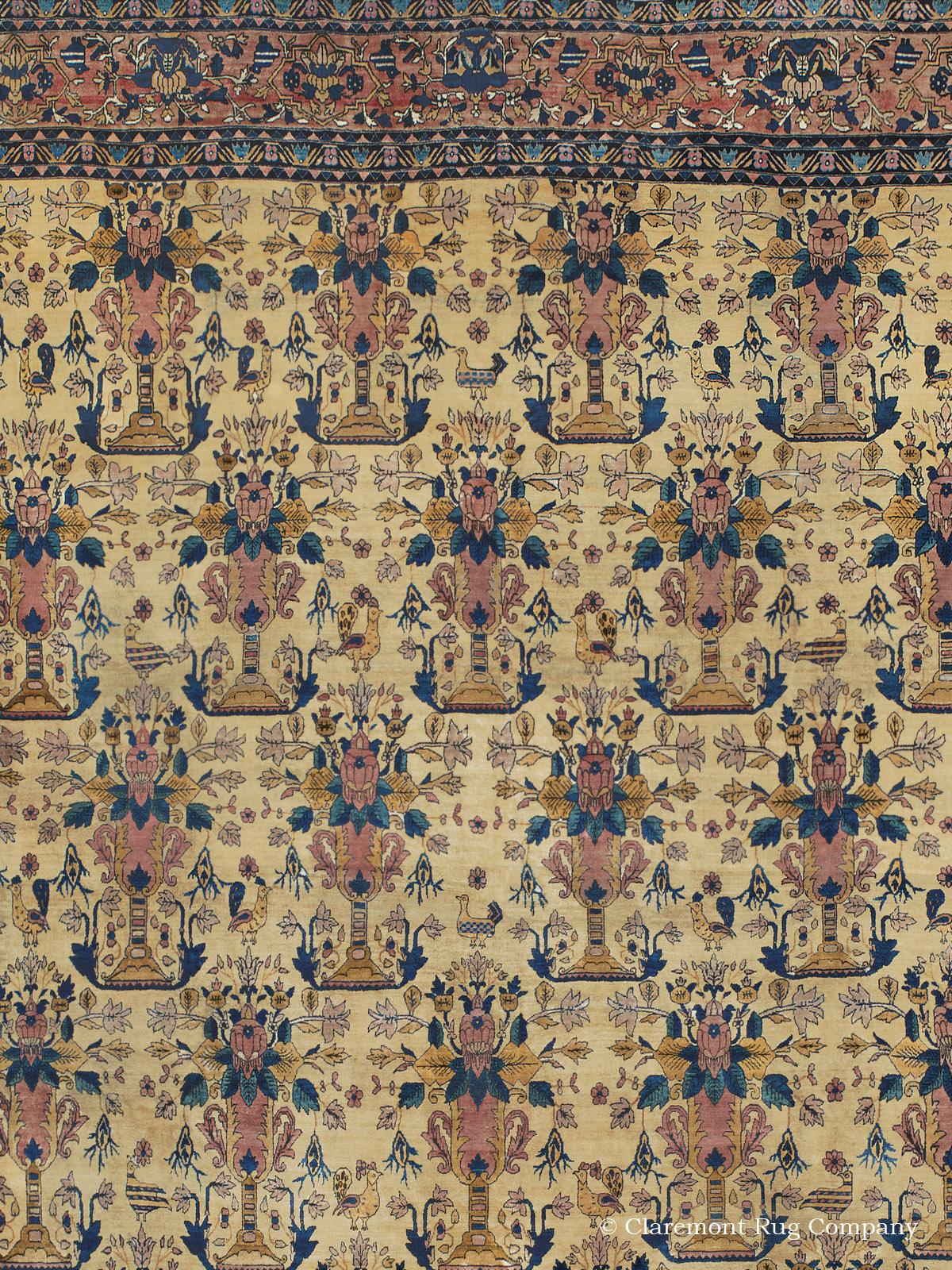 Designed for a regional aristocratic clientele, the Ferahan region of West Central Persia developed a distinctive rug weaving tradition in the 19th-century that blended geometric influences from the surrounding tribes and villages with more refined, curvilinear design, often in an incredibly artistic manner. Ferahan carpets were one of the rug-making genres displayed at the Vienna Exhibition of 1873, which ushered in broad Western interest in the Oriental carpet.
Investment-level Ferahan rugs were not produced after the 1910s, and the finer 19th and turn-of-the-20th-century examples have become quite rare. The best antique Ferahan rugs woven 90-175 years ago are considered to be among the most original and artistic antique room size carpets ever woven in Persia. Their high-grade wool, spirited uncompromising workmanship, sublime color palettes, and durable construction have made them the parlor rug of choice of European and East Coast families since the middle of the 19th-century.
Today, the best Ferahan Persian carpets have become a favorite of connoisseurs and established interior designers, not merely for their great decorative appeal, but because they have long exhibited a consistently escalating market value. Antique Persian rugs known simply as “Ferahan” are characterized by a close-cropped and tightly packed pile of fine yarn. They typically employ dense allover field patterns, notably the Herati blossom and curling leaf antique carpet design, epitomizing the exceptional craftsmanship of 19th-century Persian carpets. Pieces of somewhat heavier weave with graciously drawn teardrop- or sunburst-shaped central medallions are called “Ferahan Sarouk.” 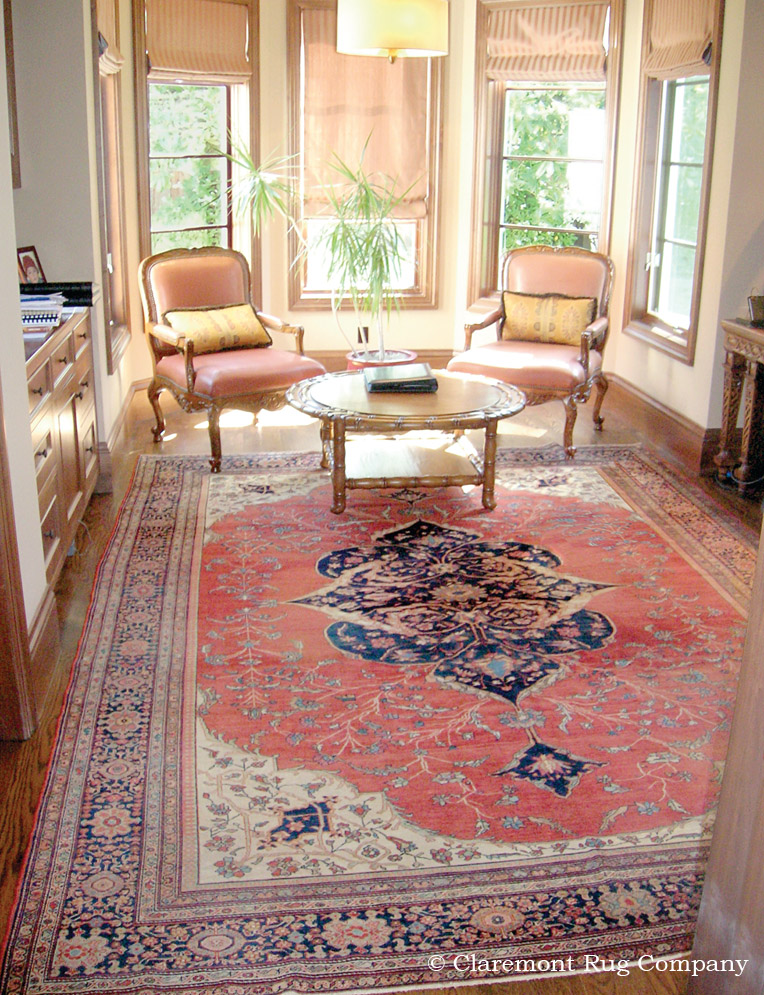 The Ferahan area produced two distinctive styles, known generally as Ferahan Sarouk (or Feraghan Sarouk) and simply Ferahan (or Feraghan.)  Some rugs combine traits of both styles, making an exact attribution impossible. There are a number of unique antique carpet design features which set the fine antique Ferahan Persian carpets apart from the styles of other regions. Their floral motifs show original, inventive drawing and exceptional delicacy, each blossom varying slightly from the next, both spontaneous and balanced. Ferahan carpets often offer intricate allover patterns, most frequently on a glowing midnight indigo ground and woven in densities of up to 800,000 knots in a 4×7 rug. Some pieces have borders based in unique celadon to apple green hues and all have closely shorn pile and a fine, “handkerchief” handle.
Although they are sometimes less detailed than the court carpets of the large cities of Kashan or Isfahan, Ferahan antique Persian rugs often match their elegance and usually surpass them in their creativity. In contrast to the exactitude of pattern in Persian city rugs (known as “the art of absolute perfection”), Ferahan region rugs have a more freeform, improvisational quality in both their colors and designs. In the best antique Ferahans and Ferahan Sarouk rugs, each petal and leaf is slightly unique in its size, colors and patterning, making living with them a fascinating process of discovery.
Antique Ferahan Persian rugs offer a wide spectrum of vegetable dyed colors, mellowed to soft yet rich shades. One exemplary color is the depth of the midnight indigo shade they were able to produce and use so effectively as a counterpoint or backdrop to the rest of the subtle antique Ferahan rug palette of color. The best Ferahan antique rugs are also known for their abundant use of seldom-found tones of green, from soft celadon through rich apple green, to the deepest forest greens. 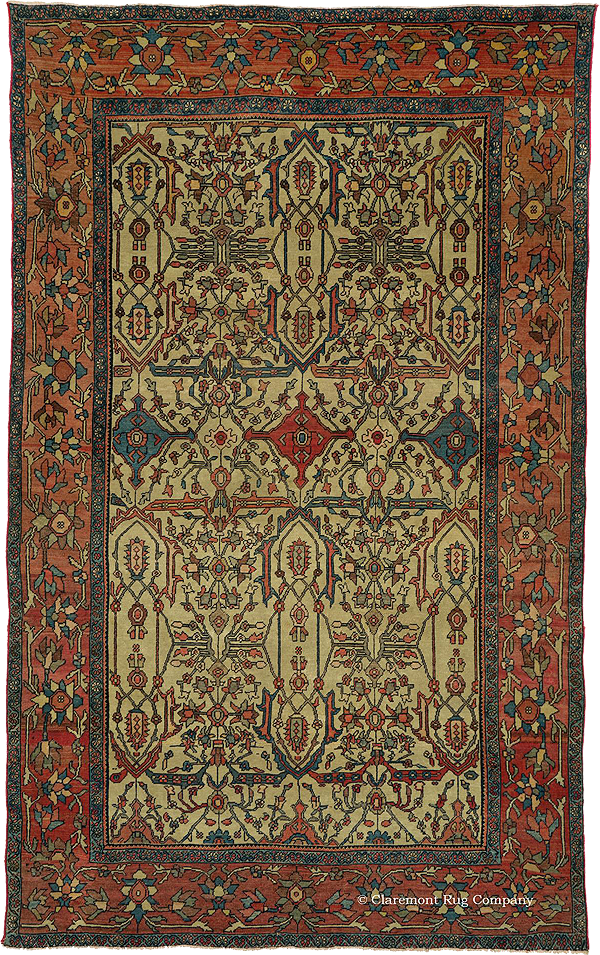 The art of streaking color, a technique known as abrash, was developed in antique Ferahan carpets to a high degree, and is used profusely in 19th-century-examples, especially those woven in the pre-commercial period of the 1880s and before. Often in these early antique Persian carpets, the base color will change dramatically from one end of the field to the other, a traditional technique that can produce great drama and distinction.
Ferahan Oriental rugs originated from the Ferahan plain in the Arak district between Hamadan and Tehran, which is one of the most fertile, agriculturally productive areas in Persia. The antique Ferahan rugs have tribal roots, but since they were primarily produced for a wealthy urban clientele, they developed a style more closely aligned with the rich floral detail of classical antique Persian rugs. Their multi-lobed medallions owe much to the Tabriz tradition, while their palmettes and other floral motifs exhibit the influence of the nearby Sarouk weavers. The resultant fusion created a never-to-be-repeated hybrid style of elegance through simplicity.
At Claremont Rug Company, we usually avoid Ferahan rugs of the 1920’s and later, as they commonly use some harsh and unappealing artificial dyes along with static and standardized designs. The 19th-century and turn-of-the-20th-century Ferahan and antique Ferahan Sarouk carpets in which we proudly specialize are found most often today in the area-size (3ft x 5ft to 4ft 6in x 7ft) and small room-size (7ft x 10ft to 9ft x 12ft) formats. Art-level, room-size antique rugs in good condition have become less available internationally, especially in the best qualities, while oversize and even palace-size antique carpets are found only very occasionally.
As a whole, true art-level 19th-century Ferahan & antique Ferahan Sarouk rugs in good floor condition are now very difficult to find overall and extremely highly regarded. They stand solidly in the upper tier of investment-level decorative and collectible antique Persian carpets.