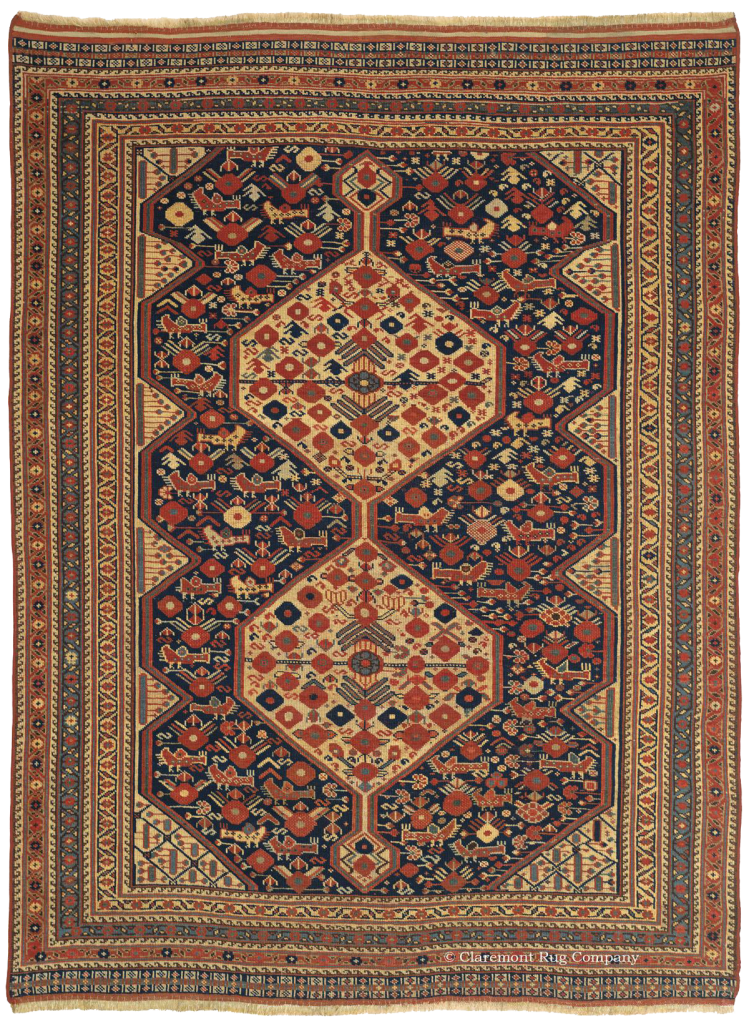 Greatly admired by connoisseurs of tribal weavings, 19th century Persian Khamseh rugs have strong similarities to the weavings of the nomadic Qashqai, which share their attention to saturated color and intricate, stylized geometric motifs. Khamseh was a 19th-century confederation of tribes in Southern Persia whose rugs are related in style and geographic origins to the Qashqai and Afshar traditions.
Khamseh rugs are especially known for their idiosyncratic use of a diverse collection of tribal and zoomorphic devices. The most prized Khamseh design is the “murgi” motif, usually interpreted as a dense field of up to one hundred flying birds, incorporated within and around one to three diamond shaped medallions. Like other nomadic weavings from the mountainous Fars region, the ornamentation is often continually varied, and augmented by naturally dyed hues of a saturated intensity.
Many 19th century examples are noted for the use of unusually high-quality, lustrous wool in their construction. The traditional Khamseh palette is deep and rich featuring glowing mid-tone to dark blues and rusts. A floppy handle and the use of darker warp colors distinguish many antique Khamseh rugs, woven almost exclusively in area sizes of 4×6 to 5×8.
The most finely crafted and prized rugs of this group are the 19th-century pieces of the Khamseh sub-tribe. These are noted for their extremely tight knotting, designs so crisp that they appear to be sculpted out of ivory and repeating “Mother-and-Child” boteh motifs or designs of majestic medallions on unadorned beige fields.