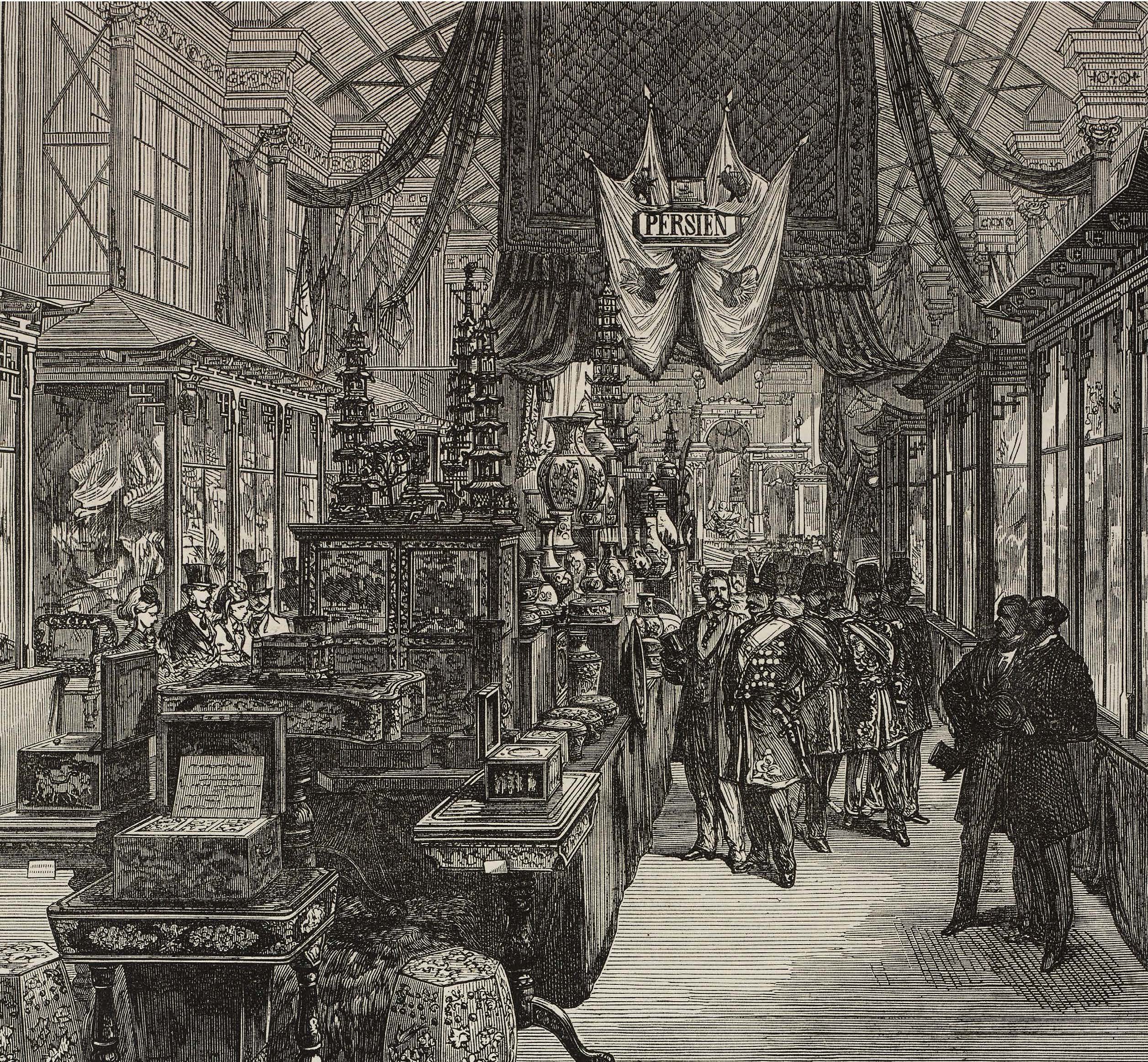 In 1873, the city on the Danube hosted an elaborate world’s fair —The Vienna Exhibition promoting “Culture and Education.” Russia, Japan, and the Ottoman Empire with their displays of traditionally dressed mannequins and replicas of Topkapi Palace and Turkish baths all saw it as an opportunity to create serious interest in the West for Eastern culture. The fourth Oriental entrant, Persia, featured in its pavilion three styles of carpets personally chosen by Qatar ruler Nasser al-Din Shah to represent his country’s weaving prowess. Of the three, one was a stylistic newcomer destined to captivate a world market.

(Left) $33M 17th century Isfahan Safavid rug. Note the almost perfect drawing of each blue ornament matched to its pair. (Right) c.1860 Ferahan Sarouk rug. Note the individualization of most of the flowerettes and leaves on any branch

Auburn, brick and rust reds, morning glory and inky blues, burnished and sun-soaked golds enchanted fair-goers as they strolled past the huge cases displaying this debutant Oriental carpet. Small to extremely large rugs exhibited floral drawing softened by uncanny realism, stately medallions bedecked with constant tiny nuances, and extraordinary finesses of weave. The very best of these carpets from the Persian Ferahan plain over time came to be recognized by connoisseurs worldwide for their inimitable presence, both regal and expressive. 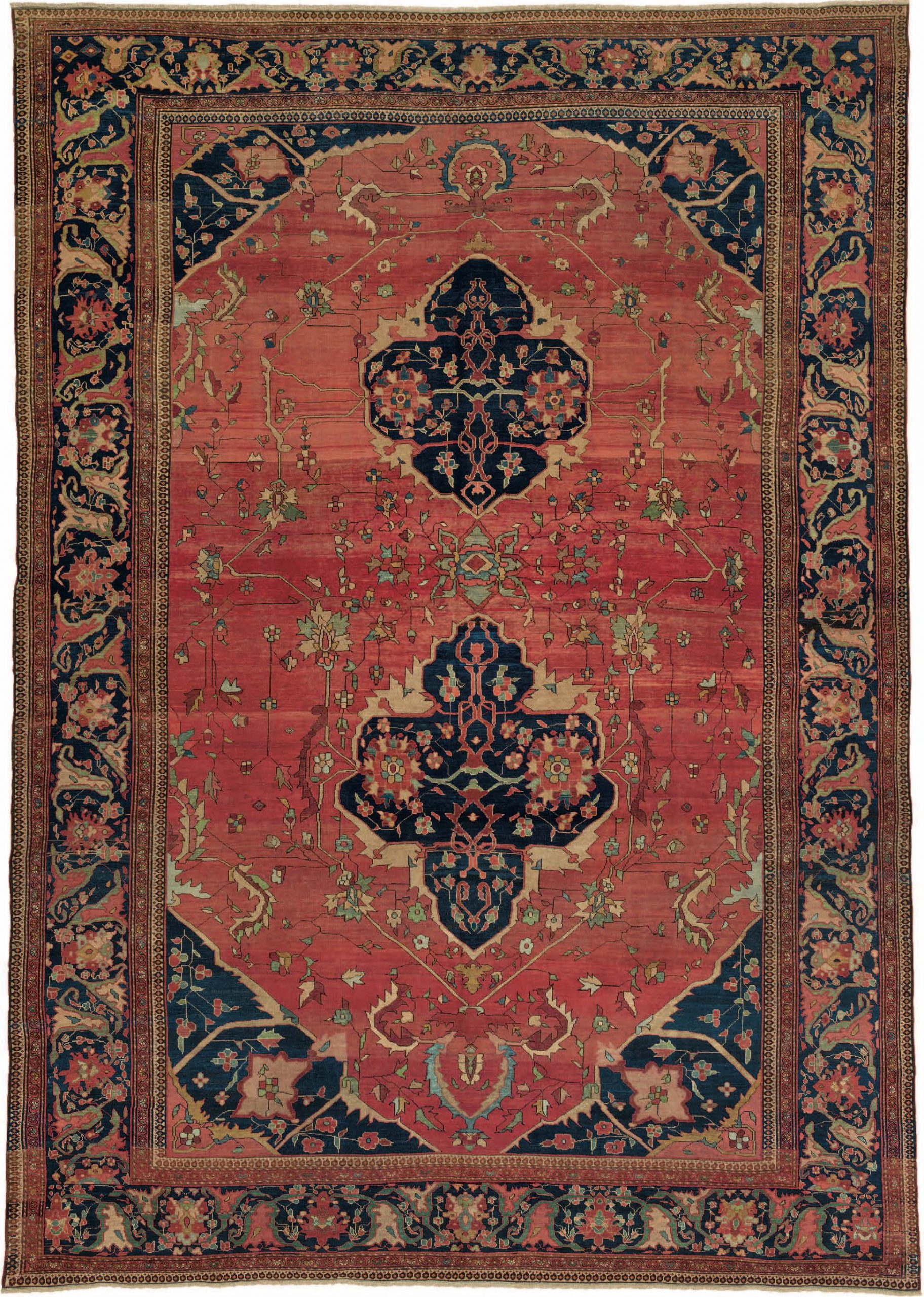 Starting in the 1500s, Persia’s Safavid dynasty had subsidized carpet ateliers that created splendiferous rugs with never-seen-before curvilinear designs of ornate florals and vinery meant to express utter perfection, the zenith of beauty. Many were of great size, blanketing royal palaces and courtiers’ homes, while the rest were used as gifts of state or sold to foreign aristocracy. With the dynasty’s fall in 1736, the royal ateliers closed, marking the end of what came to be known as “The Golden Age of Persian Weaving.”

Yet, within the following few decades, on northern Persia’s vast Ferahan plain, abundant in water sources and unusually rich grazing land, a new weaving aesthetic evolved. Populated by a loose rug-making consortium of
large and small villages, this district supplied local markets with their varied traditional handcrafts concurrently to the royal carpet production. This bevy of carpet weaving attracted its share of the dismissed artisans from the Shah’s workshops who retained the intellectual property that had created the Safavid excellence, notably Armenians weavers and merchants joined their relatives and contacts on this verdant terrain. 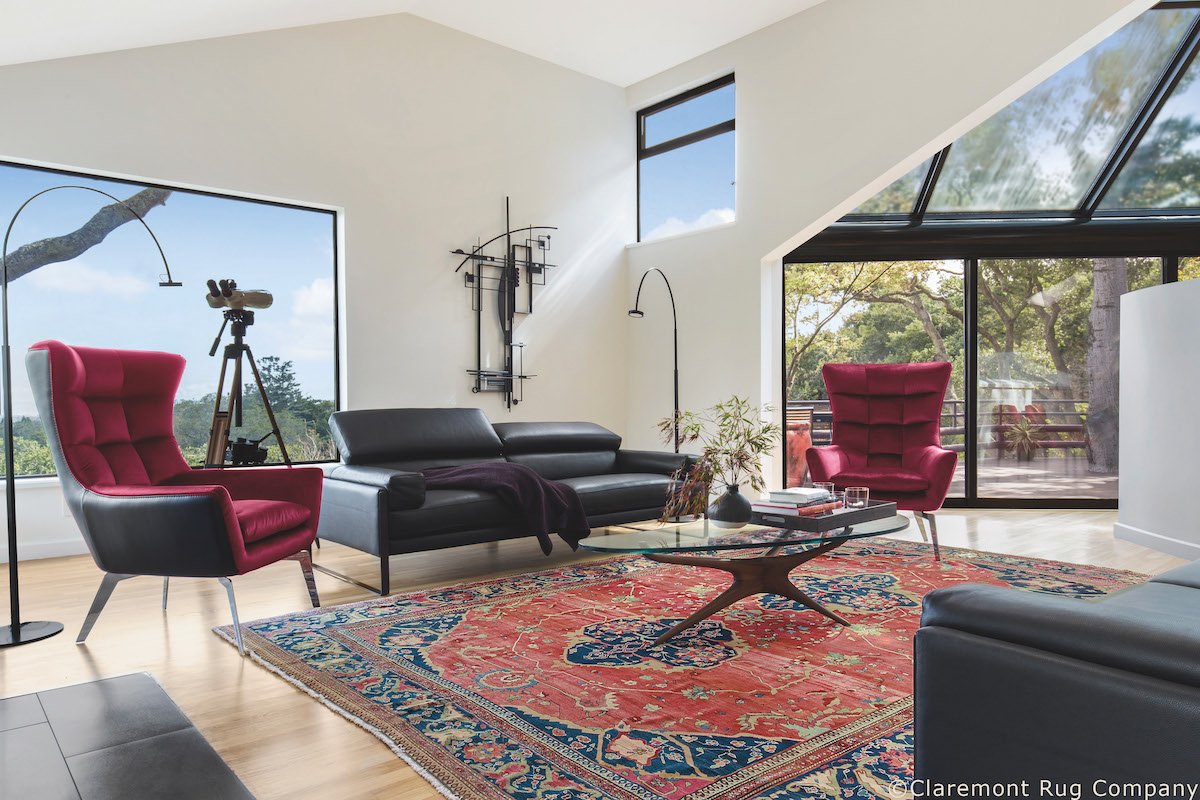 Rare double medallion Persian Ferahan Sarouk, 150 years old, sits comfortably in this contemporary décor benefitting from the generous amounts of
diffused light that accentuates the spectacular range of sunset reds in the field.

Employing the Safavid floral curvilinear aesthetic as a model, but unbound by its rigorous formal patterns and the mandate of “Absolute Perfection,” Ferahan weavers experimented with creating more naturalistic-looking garden motifs and changing the perfect curves of the Safavid rugs to somewhat more angular ones. Ferahan rugs include individualized flowers, tendrils and vines tilting at charming angles, often so delicate that they appear to be hand-drawn. A distinguishing aspect of this visionary carpet style is how the main borders reflect the rhythms and expressiveness seen in the rug’s interior portion, a departure from other rug categories that used borders as ornate frames. 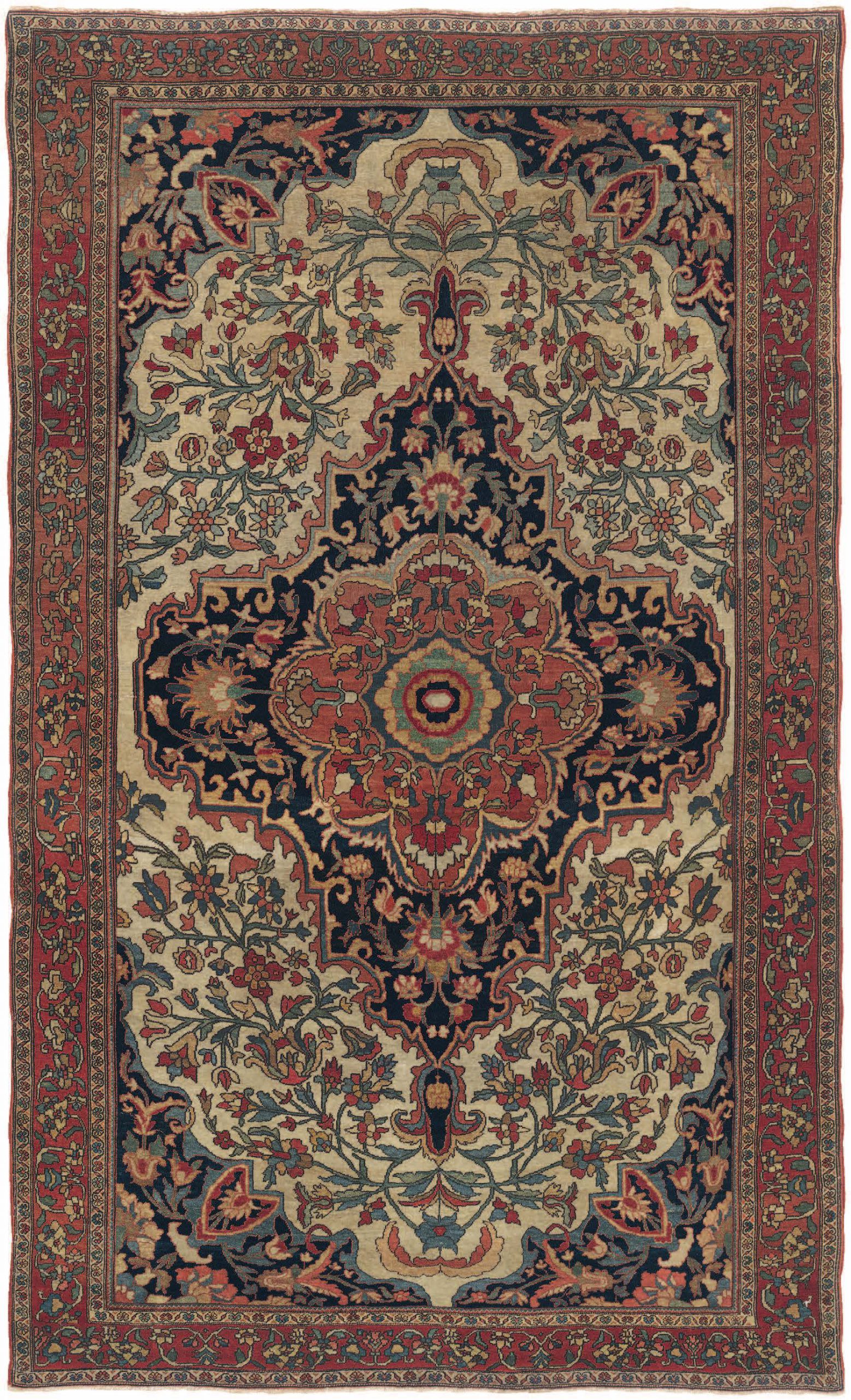 “Ferahan rugs introduced spontaneity, an improvisational latitude that yielded seemingly infinite permutations,” notes Jan David Winitz, founder and president of Claremont Rug Company, who has studied them for over a half-century. “Part of their brilliance lies in their use of symmetry and asymmetry within a single carpet. The overall effect is a virtuoso sense of visual movement and depth, a nuanced union of formal and naive, floral and geometric,” he says.

“Stately, classical, yet alive with whimsy, the Ferahan aesthetic is like crossing orchestral music with folk songs,” Winitz continues. Ferahan weavers even felt free to scatter tiny motifs such as stars, mandalas and two-dimensional dogs, birds, and plants that may only reveal themselves after the observant viewer has looked closely at a carpet’s myriad details. 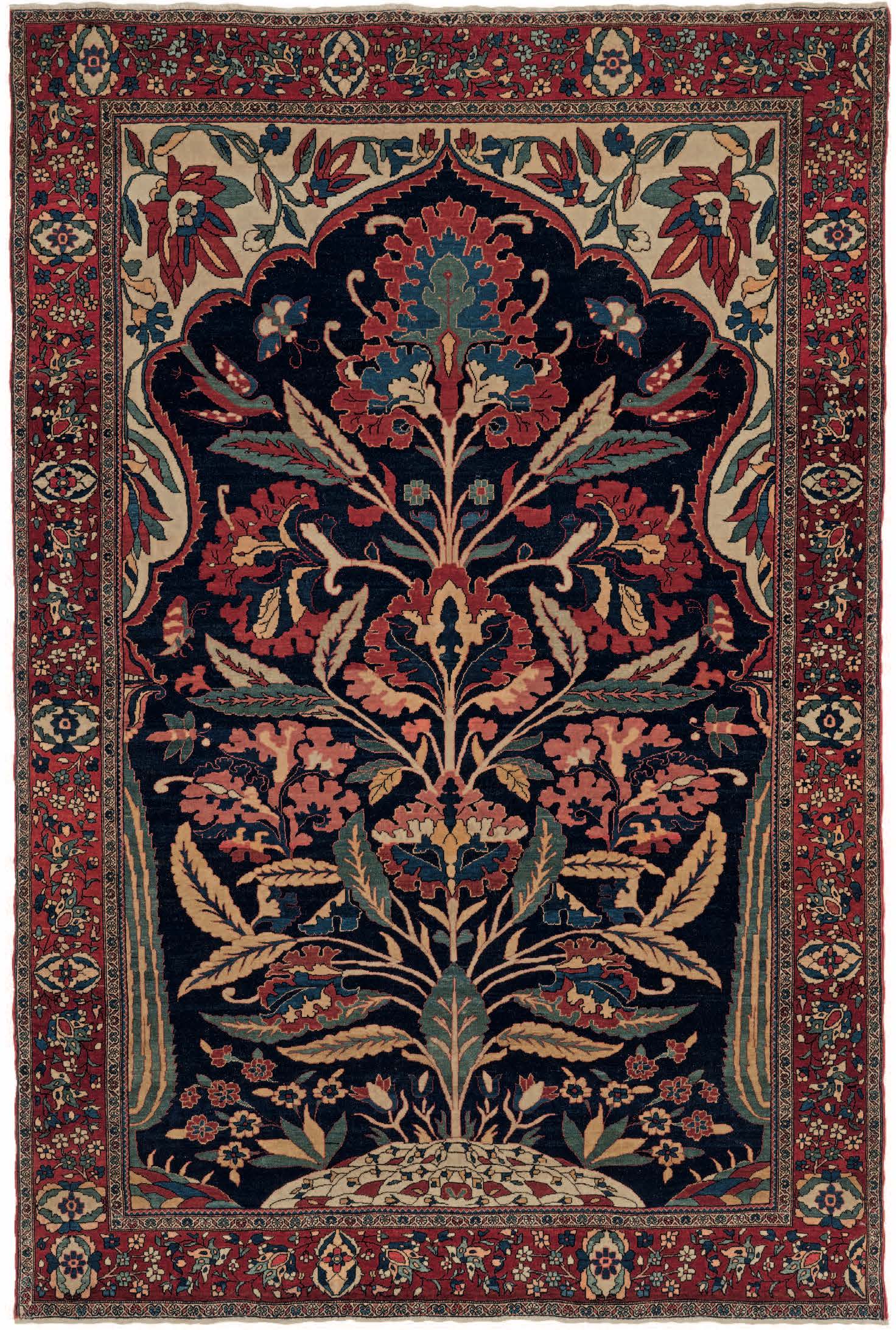 And more than any other 19th century Persian floral carpet, Ferahans are individually distinct from one to the next. This diversity was, at the time of the Vienna Exhibition and continues to be, a significant part of Ferahan allure.

As Ferahan’s market emerged in the 1800’s, Europeans living in the Middle East took notice. Jakob Polak, an Austrian physician who was instrumental in establishing modern medicine in Iran, wrote that “the most beautiful rugs come from Ferahan” — a province said to be home to some 12,500 looms at the time. Commissions of any dimension and design could be made, ranging from ‘area’ mats to palace-size carpets as vast as 15 by 29 feet.
Accolades such as this undoubtedly encouraged a vibrant export business. Inspired by foreign visitors’ accounts of Ferahan rugs on palace floors and bolstered by investments of royalty and gentry in the larger locally-run workshops, a renaissance of woven artistic expression burgeoned. 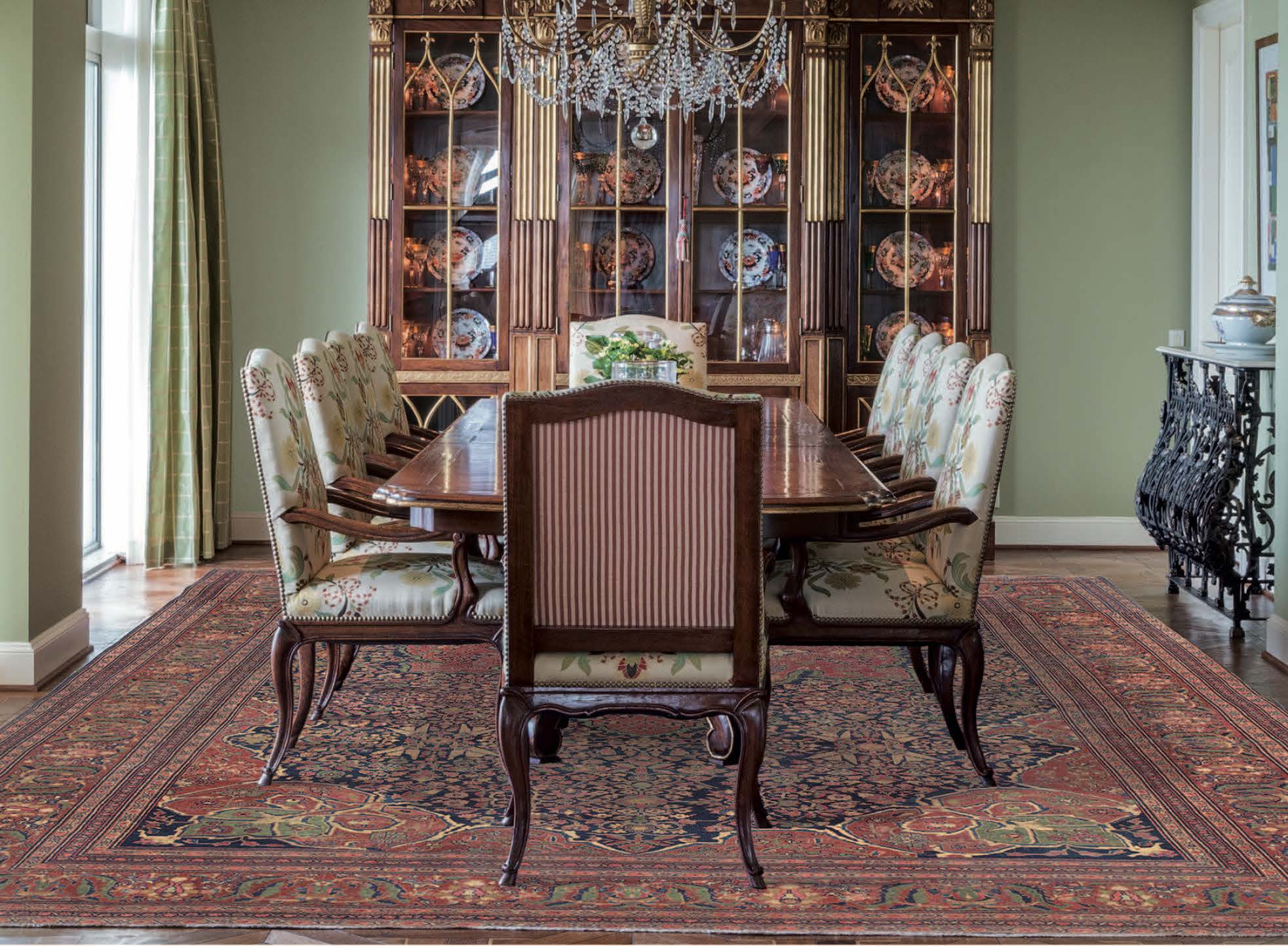 As they had numerous times before, most recently during Egypt’s Mamluk carpet weaving period, Armenians played an instrumental role in the mercurial rise of Ferahan carpets. Their early embrace of Christianity, a faith that allowed for more naturalistic renditions in art than the Islam religion, ultimately contributed to the Ferahan aesthetic. During their long history and travels, Armenian artisans were influenced by myriad ‘foreign’ patterns and techniques, including freeform tribal Kurdish and Caucasian rugs. Praised by authorities such as the Greek historian Herodotus (“brilliant colors”) and Venetian explorer Marco Polo (“the choicest and most beautiful”), among others, the Armenians’ seventeen centuries of unbroken weaving experience established a remarkable aptitude.

Armenians also enjoyed great success as maritime merchants from the Middle Ages, establishing trading in the Netherlands, Turkey, Russia and elsewhere, specializing in pearls, diamonds … and rugs. A note by British Chargé d’Affaires William Taylor Thomson that by 1850, the Ferahan province was supplying the majority of the country’s weavings for export indicates a robust mercantile infrastructure – even before their exposure at the Vienna Fair. 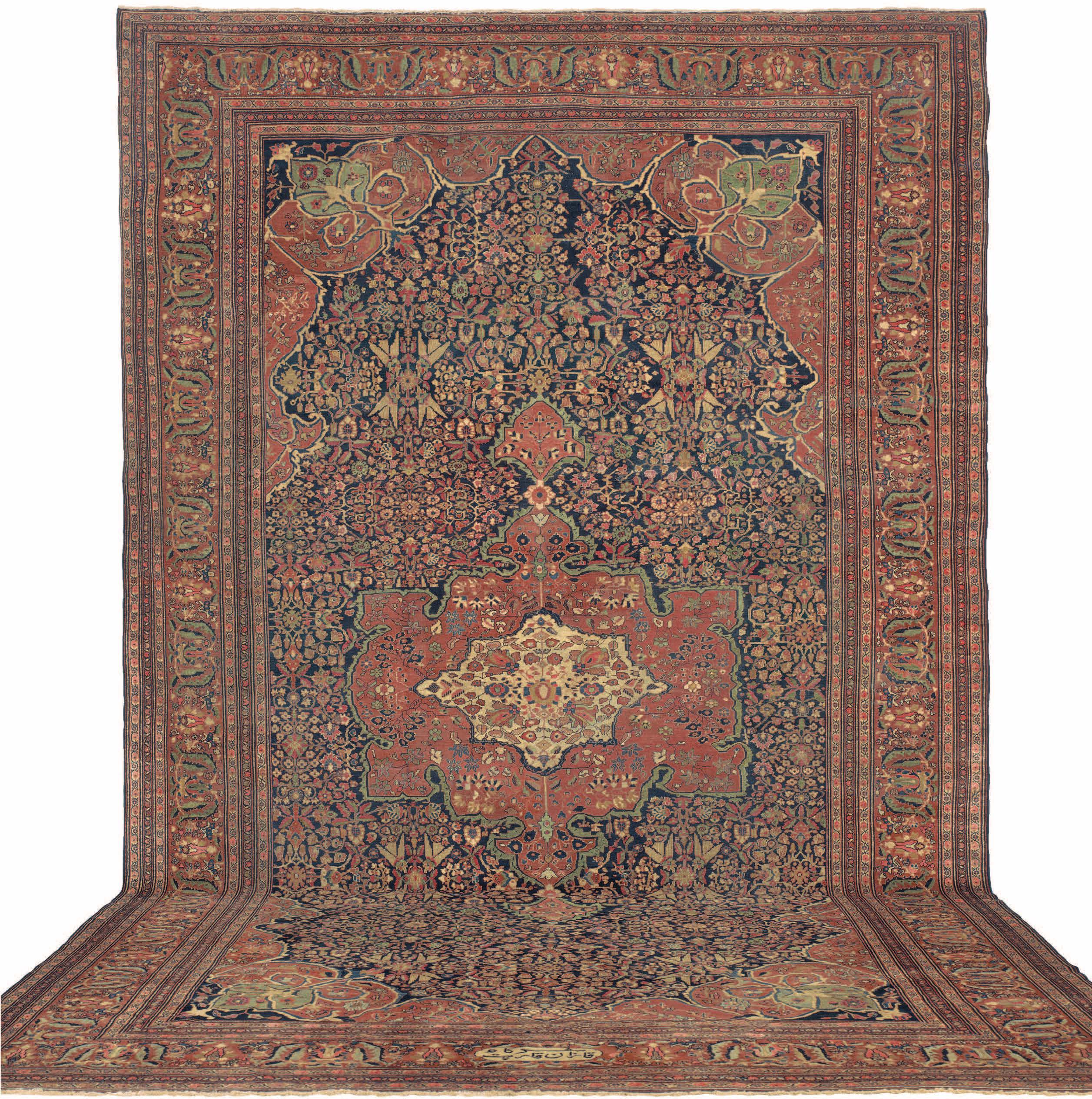 This medallion carpet from the middle of the 19th century exemplifies the best of Ferahan weaving at its height, offering sensitive, rich color combinations including rare green, and a mesmerizing field design.

The new style produced sumptuous carpets with two different internal structures or “handles.” One, referred to as Ferahan Sarouk, with an opulent pile and a very sturdy handle, characteristically have large center medallions and elaborate corner spandrels. The other referred to simply as “Ferahan,” is much more pliable, with closer shorn pile, and most commonly feature dense all-over patterns. In Great Britain, where the Ferahan style gained significant popularity, it became known as “The Gentleman’s Carpet.”

“Some Ferahans are bold and demanding, while others are quiet and sophisticated, inviting close contemplation,” Winitz observes. And yet, the sensitive viewer can always tell that Ferahans and Ferahan Sarouks are branches of the same family.” To this day, the nomenclature is often used interchangeably. (For the sake of simplicity, in this article, the geographic appellation “Ferahan” is used for all carpets from the region.) 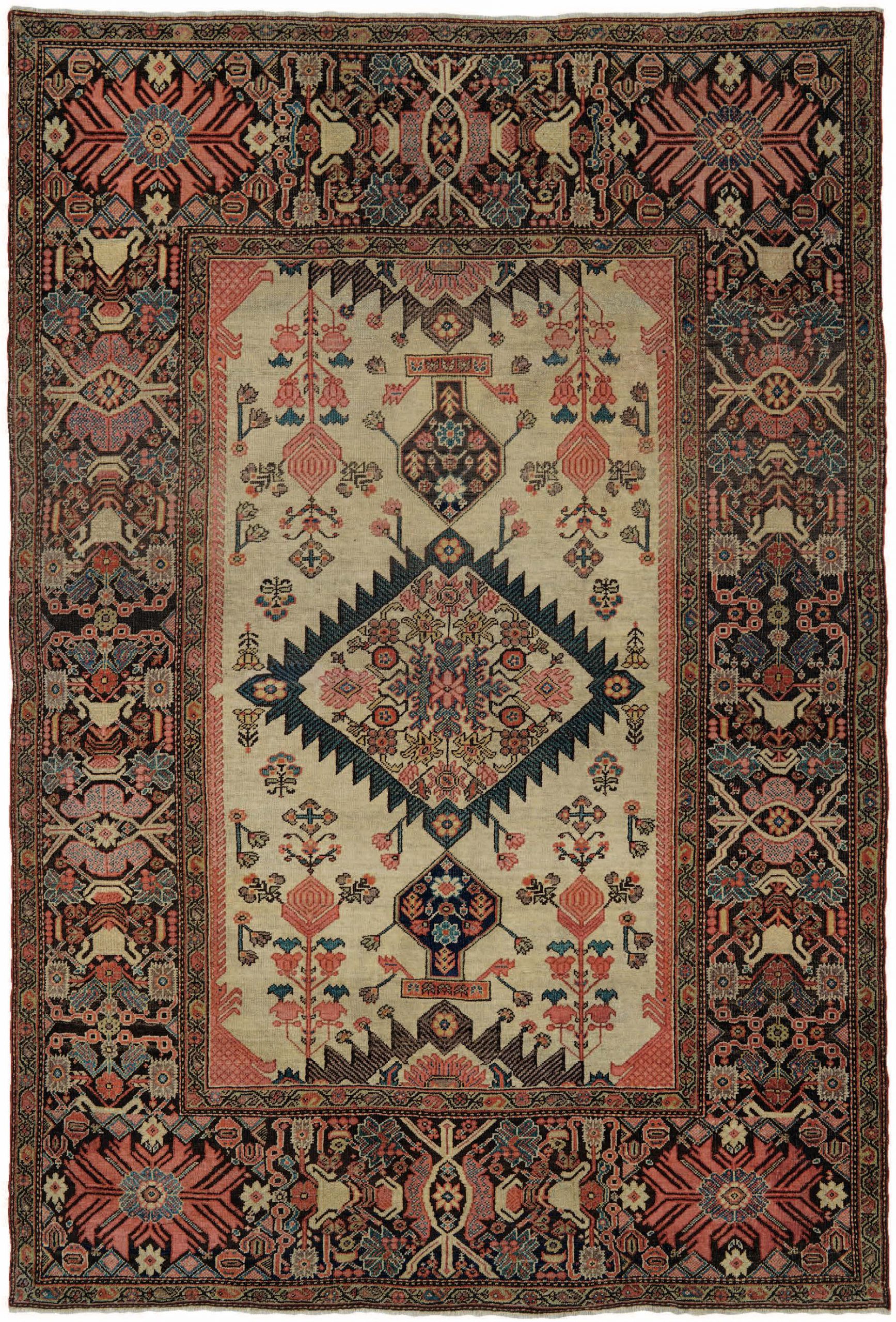 Partially responsible for Ferahan’s renown are the local grasses that fed the Karakul sheep and created an exceptional quality of wool. Durable, supple, lanolin-rich, it appears to glow “from the inside,” even after 150 or 200 years. The deep sheen of antique Ferahans provides a particularly satisfying experience of color for the viewer, as tonalities shift throughout the day’s changing light.

Ferahan weavers were also master dyers. Their rugs offer a resonant spectrum of saturated reds as well as unfathomably deep midnight indigo hues that stand the test of time. Within each color, an astonishing spectrum of tints was wrought, as many as twenty shades—the result of the abrash (intentional color-shifting) technique at its finest—adding great visual depth to particular parts of a carpet. For instance, rust, shrimp, terra-cotta, coral and pomegranate, all based in the madder vegetable dye, would be used in a single border.
“The rangaz (dyer) may always be known by his arms,” observed English physician C.J. Wills, who traveled widely in mid-19th century Persia, “which are generally stained deep blue, as indigo is most used.” 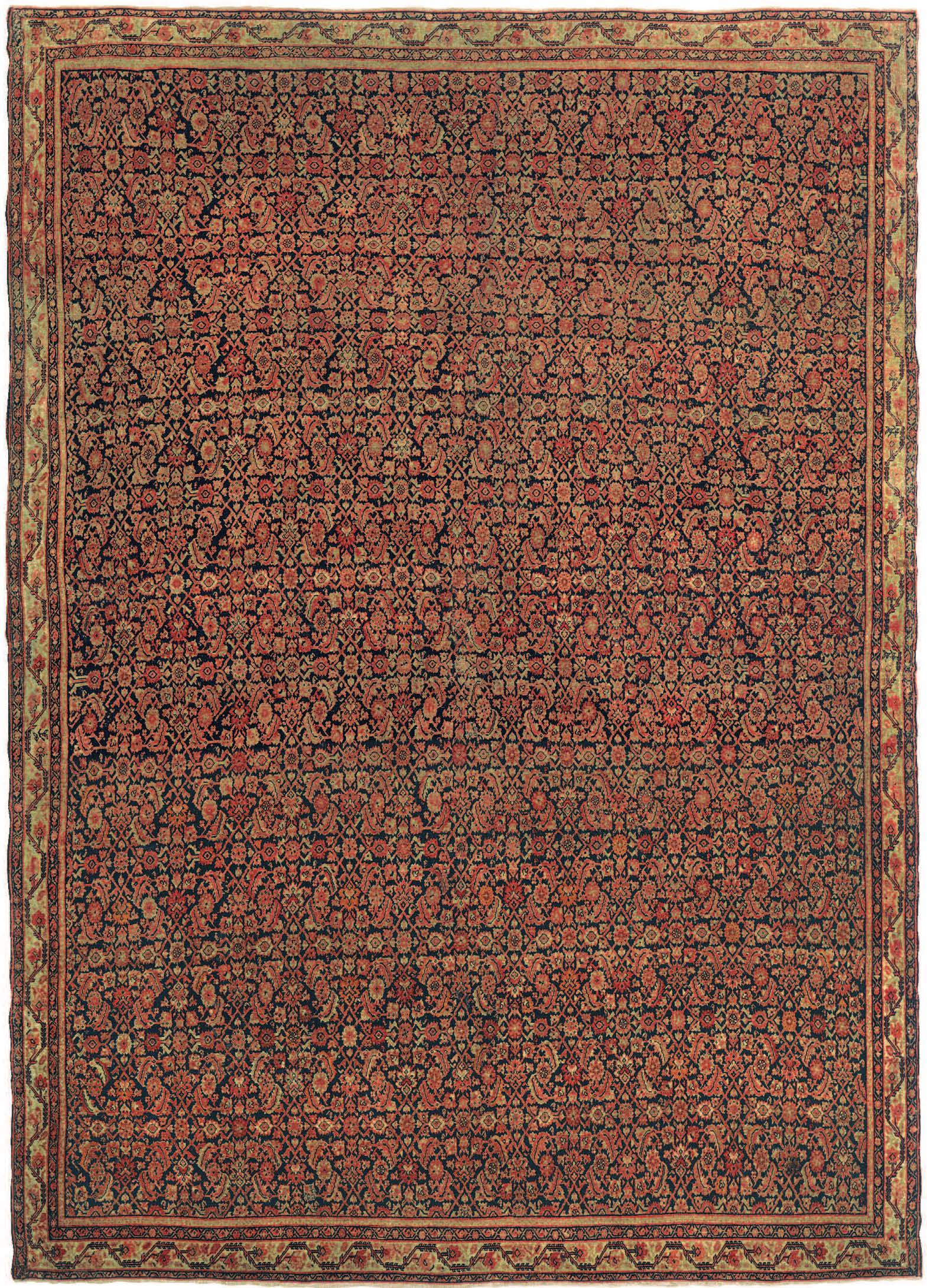 And then there are the Ferahan greens in tones that range from soft celadon and teal to darker shades of jade, emerald and pine. When it comes to employing natural dyes, green is among the most difficult to control, as it often required a two-step process of overdyeing indigo with yellow. The “Gentleman’s” Ferahan was frequently distinguished by a pistachio-hued border that was derived by an unusual one-step process from a particular locally harvested buckthorn berry not seen in other rugs.

Winitz notes, “We believe this virtuosity of color is yet another Armenian influence. Throughout history, the Armenians were considered master dyers as well as accomplished weavers whose long heritage included a plethora of proprietary dye recipes. In Claremont’s forty years of experimentation in dyeing yarns for rug restoration, we have cracked the code for many, but hardly all of the Ferahan tonalities.”

Written records clearly show that throughout the 19th century, this innovative weaving style with humble cottage industry beginnings came to dominate early an international market. Today it is still possible, although increasingly difficult, to find superb Ferahan and Ferahan Sarouks from the first three quarters of the 19th century. (Far more available are their early 20th century descendants, in which the fluidity of pattern and range of color of their forbearers is notably diminished.) As with any art form, the most sensitive and accomplished works are relatively few in comparison to the number of pieces made. That said, the region was so prolific and groundbreaking that connoisseurs worldwide continue to be drawn to and enraptured by them.