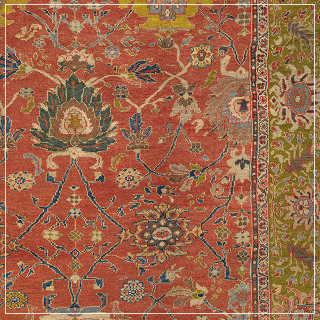 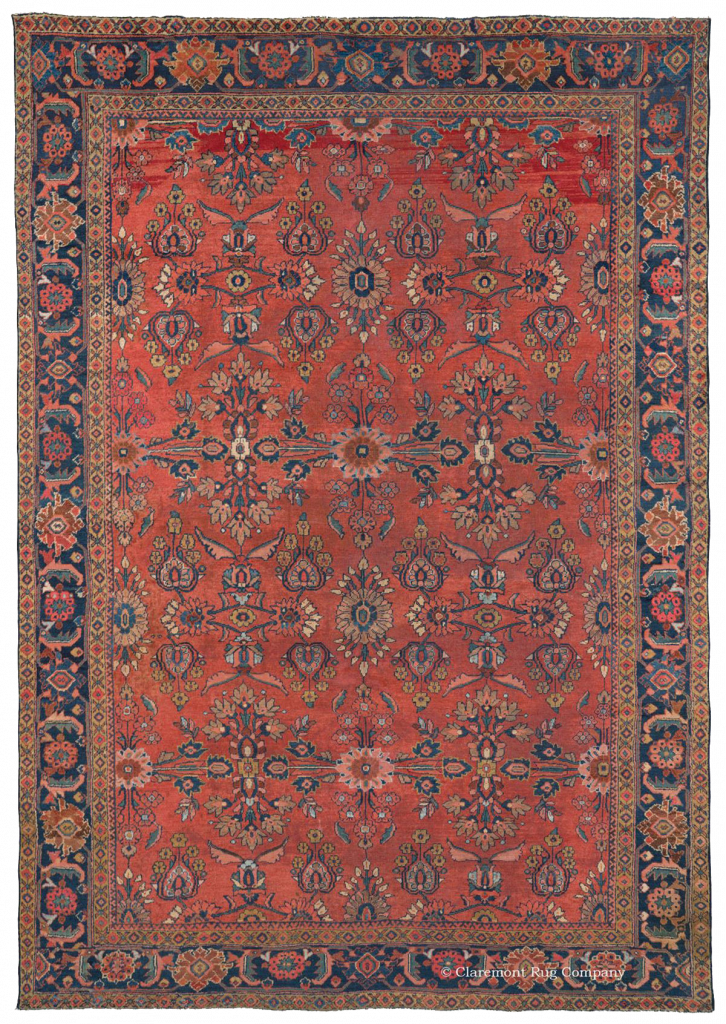 Mahal Persian carpets from the 19th-century and turn of the 20th-century have become perhaps the most desirable among Persian village weavings, as they appeal strongly to both connoisseurs and interior designers. These two important groups of buyers are attracted to them as outstanding examples of folk art weaving and for their sophisticated, yet often whimsical, highly decorative aesthetic. As a result, the best Mahal antique carpets have become very difficult to find in the international market.

The Oriental carpets from Mahal were a product of the cottage industry in and around this Northwest Persian village, and were often produced on the family level. Therefore, they use the loose to moderate weave, and somewhat thicker pile, similar to nomadic and tribal rugs. Nevertheless, they have now taken an equal seat beside the highly reputed and more finely knotted Ferahan and Mahajiran Sarouk Persian carpet styles from this same Arak district. 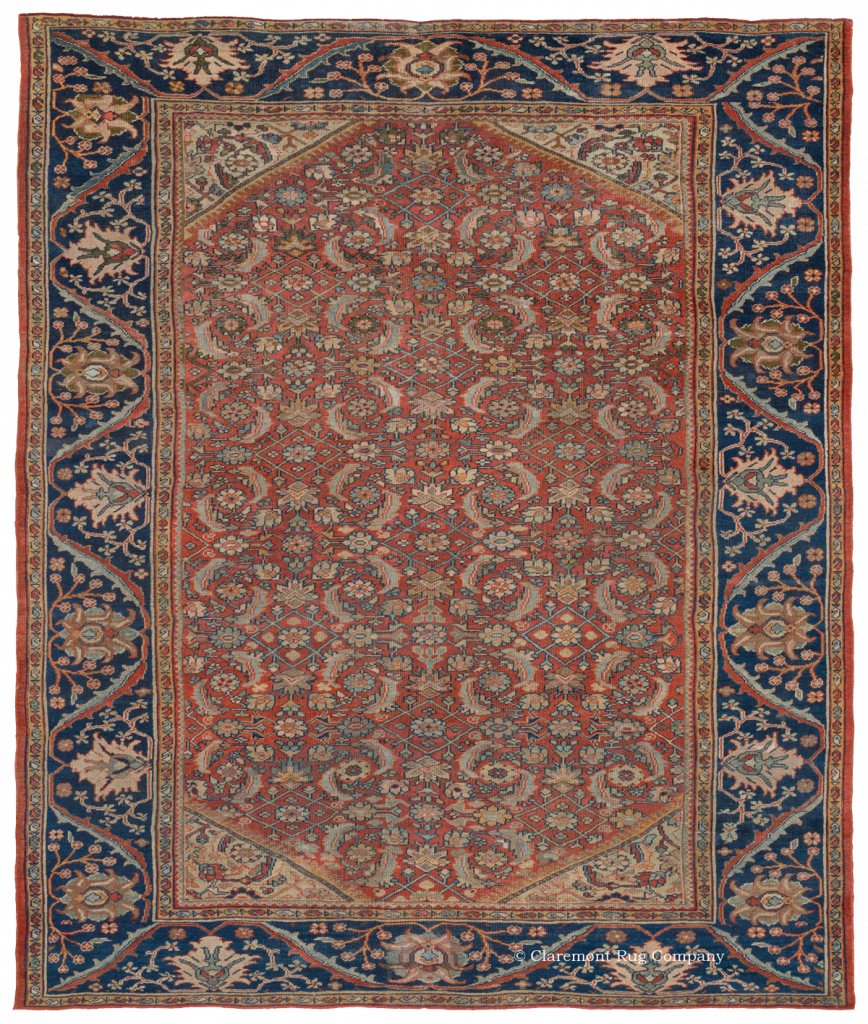 An even more exclusive class in the Mahal style, referred to as the “Ivory Mahals”, for their glowing ivory to beige grounds, are now considered to be among the most highly desired antique carpets on the international market and with good reason, for in their finest examples, their visual impact of dramatic drawn motifs against the lighter base is often beyond compare. 19th-century Ivory Mahal antique rugs are found mostly in the 9ft x 12ft to 11ft x 14ft size, and larger examples create quite a stir if they are beautifully conceived and in good floor condition.

Ivory Mahal Persian carpets often possess a charming naiveté, along with a palette based in undyed sheep’s wool, in hues of ivory, cream and beige. Often with lattice works of vinery and flowerheads in soft pastels, a secondary drama of shading is played out in marvelous color striations otherwise known as “abrash”. The finest and hardest-to-find of both the ivory ground pieces, and the entire Mahal group of antique Oriental rugs use allover designs of spaciously placed, extremely overscale blossoms, asymmetrically arranged across a sparsely adorned field. 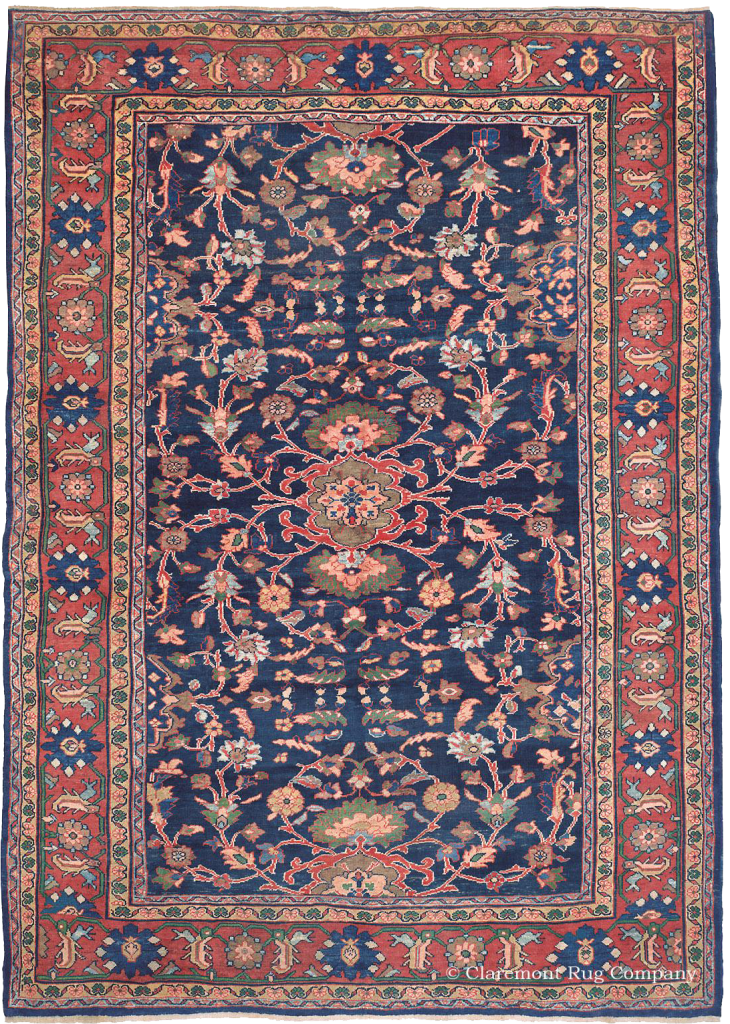 In the late 1870s, a new style of Mahal antique carpet was developed as a result of venture capital money invested by Ziegler & Co. of Manchester, England, which subsidized one-of-a-kind commissioned Persian rugs particularly for export to England and France. This resulted in the noted “Ziegler Sultanabad” style. Distinguished by a significantly finer weave and thinner fabric, and stylish, allover patterns in delicate color, Zieglers met with great success in Europe, immediately recognized by the more decoratively inclined Western markets. Although based on classical Persian carpet patterns, Zieglers offer delightfully inspired English translations, often to impressive overscale proportions.

Zieglers are beloved among many fine interior designers and art lovers for their marriage of casual motifs and superlative craftsmanship. Yet, another school among connoisseurs clearly prefers the more loosely woven, heavier piled “village” Mahals for their abundant creativity and folkloric charm. They appreciate their highly abstracted, naïve renditions of both tribal motifs and traditional Persian Court and Garden designs.

Exemplary Mahal antique carpets are preferred by many for their originality and inspired artistry, and have forged an important niche in today’s decorative market for their compatibility and versatility with the finest interiors and other works of art. Because of their rarity, desirability and innovative spirit, the best 19th-century and turn-of-the-20th-century antique rugs will continue to grow as art investments for many decades to come.