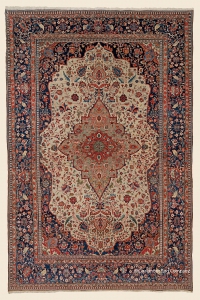 Kashan carpets are one of the most important of the refined urban Persian carpets that are the direct legacy of the Golden Age of Persian Weaving of the reign of the famous patron of the arts, Shah Abbas, in the 16th and early 17th-centuries. 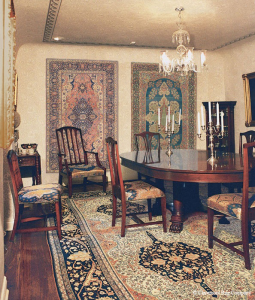 In this historical farmhouse in the California countryside, museum-level rugs on the wall and floor are combined with early American furniture to create a sublime atmosphere.

Many of the archetypal Persian carpet designs originated here. The source of one notable garden motif, the “Royal Garden” of Kashan, still has flowing spring water and has been well preserved since the 16th-century. This royal garden was built by the above-mentioned Shah Abbas, the principal monarch of the Safavid Dynasty. The basic inspiration and model for most city carpets is the Garden of Paradise.

The vast majority of the prized antique and vintage Kashan rugs available today usually stem from the second half of the 19th to the beginning of the 20th-century. During this time period, the best Kashan carpets were commissioned for individual homes, while others were produced for either the domestic or foreign markets. The best Kashan carpets have always used a superior quality of wool. Older antique carpets feature the preferred vegetable dyes, while virtually all pieces from the 1930’s on incorporate the modern chrome dyes. 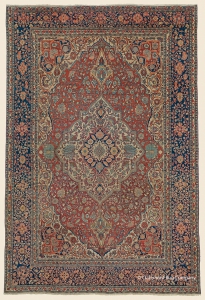 The rarest group of Kashan rugs that utilizes non-traditional designs and color palettes is the “Mohtasham Kashan,” which were woven up to the end of the 19th-century. This elite class of Kashan carpets uses a very luminous quality of lamb’s wool, which gives the surface a highly reflective quality. Quite hard-to-find, true Mohtasham Kashan antique rugs are extraordinarily finely knotted. They employ either a graceful teardrop medallion or intricately detailed allover blossom and leaf antique rug patterns.

Most prized of all are the earlier Mohtasham Kashan carpets from this style, dating from the middle of the 19th-century and sometimes even earlier. The finest of these Persian carpets utilize an antique ivory or gold background and reflect exceedingly fine detail, as well as extremely time-softened pastel and earth tones. Mohtasham Kashan antique rugs of great age are typically held in private collections.

The best 19th-century and turn-of-the-20th-century Kashan carpets, be they of the Classical or elite Mohtasham style, are quite essentially formal, richly continental and definitively complement a traditional decor. Additionally, they work well in a range of other settings, especially the grand spaces being conceived by today’s creative architects. The finest pieces, if preserved in good to excellent condition and using an appealing palette of exclusively naturally dyed colors, should be considered very solid art investments.