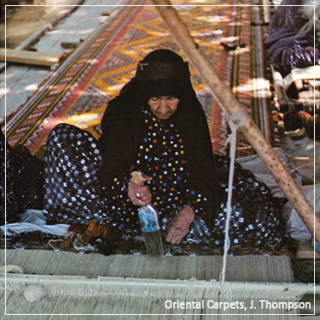 Just as the first rays of the morning sun appear over the mountaintop, a lone figure standing on a rise overlooking the valley below slowly raises a long trumpet-like instrument to his lips. As the surnay player issues forth an extended, high-pitched blast, the encampment is instantaneously alive with activity. Simultaneously, the entire community pulls its tent stakes, and with a succession of loud thuds, what had been a city of black goat hair shelters disappears.

Less than an hour later, the entire city is on the move. Camels and donkeys grunt in protest against heavy packs carrying the folded tents, clattering cookware, and woven bags bulging with personal belongings. Out of a side of a saddlebag draped over a packhorse peer a baby goat and a small dog wedged in side-by-side. Strapped high atop a limbering cow is a wooden cage carrying three squawking hens. Young men yell and sing and swear as before them a thousand sheep slow, stop to graze, and are then persuaded to move on again. A baying donkey carries a small girl, her long colorful skirt flowing down the flanks of the animal. On her back is her infant brother. Finding the rhythm of movement, the procession, stretching over a mile long, slowly climbs up the mountainside out of the valley.

Twice each year over the past three-and-a-half centuries, this migratory scene has been reenacted by numerous clans of the Qashqai (pronounced Ghash-gha-ee) nomads, throughout the Zagros Mountains of southern Persia. At any given moment over the next ten weeks, over a hundred thousand people and one million and a half animals will creep through desolate mountain passes or across high alpine meadows on their three hundred mile trek to their winter pasturelands near the Persian Gulf.

Weavers of highly desired Persian tribal rugs, the Qashqai people possess a history and culture rich in both struggle and inspiration. It is the combination of these two elements which give their antique rugs their unusual sense of spontaneity and aliveness.

Although the Qashqai have never recorded their history in writing, they have passed it down through story and song for nearly a thousand years. In their legends, they claim to have come from Chinese Turkestan, sweeping across Afghanistan into Persia on the vanguard of the armies of Ghengis Khan. Once in Persia, the Qashqai chose to live in the mountainous region of Azerbaijan, in the Caucasus, far to the north of their present southern Persian location. Early in the 16th century, the Qashqai relocated to the Fars province, their habitat over the past 400 years, probably under the subjugation of Shah Isma’il, who wanted to create a human buffer against the Portuguese, threatening his Persian Gulf shore.

For the most part, a group of loosely related Turkic tribes, the actual tie between the numerous Qashqai subtribes was political in nature. Around the year 1600, under the command of Shah Abbas, Jani Agha Qashqai took on the task of bringing order to the various Qashqai groups. To achieve this, he formed the Qashqai Confederacy, an elaborate structure that survived far into the 20th century in the face of over 300 years of almost continual political upheaval in Persia.

Part of the Confederacy’s long-term stability was due to its willingness to assimilate neighboring peoples of varying ethnic origins. It provided a melting pot that embraced groups of Kurdish, Lor, Afshar, and Arab heritage. Each of these peoples had a significant effect on Qashqai rug weaving.

In actuality, the Qashqai Confederacy comprised a highly structured nation-within-a-nation. At its highest level, it was traditionally governed by “il Kahn,” a direct descendant of the family who founded it. The six major tribes (or “tava’ef”) of the Qashqai Confederacy were divided into numerous clans of several thousand families each, called “tireha.” To add organization on the community level, the Qashqai political system was further divided into herding units of 100 families, each led by a “Kadkhoda.” Finally, a “rish safid,” meaning “white beard of wisdom,” was in charge of the welfare of a group of a few households. This high level of social organization was quite unusual among the nomadic groups of southern Persia. In contrast, the Basseri, one of the neighboring Khamseh tribes, had no organization on a broader spectrum than the isolated encampment.

A strong sense of community still exists between the Qashqai people on the local level. Writing of their extended stay with the Qashqai people, American couple Jean and Franc Shor tell of an unfortunate shepherd named Kalish who lost his entire flock of over 100 sheep in a freak snowstorm. The Kadkhoda of the 100-family unit to which Kalish belonged immediately called an emergency meeting, to which each family brought a ram or ewe to help Kalish. As the Shors were told – “This is our way of life. We all share good and bad fortune. No Qashqai household is ever left destitute.”