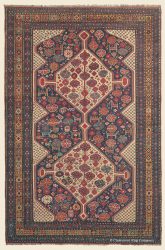 Just as the first rays of the morning sun appear over the mountaintop, a lone figure standing on a rise overlooking the valley below slowly raises a long trumpet-like instrument to his lips. As the sunray player issues forth an extended, high-pitched blast, the encampment is instantaneously alive with activity. Simultaneously, the entire community pulls its tent stakes, and with a succession of loud thuds, what had been a city of black goathair shelters disappears.

Less than an hour later, the entire city is on the move. Camels and donkeys grunt in protest against heavy packs carrying the folded tents, clattering cookware, and woven bags bulging with personal belongings. Out of a side of a saddlebag draped over a packhorse peer a baby goat and a small dog, wedged in side-by-side. Strapped high atop a limbering cow is a wooden cage carrying three squawking hens. Young men yell and sing and swear as before them a thousand sheep slow, stop to graze and are then persuaded to move on again. A baying donkey carries a small girl, her long colorful skirt flowing down the flanks of the animal. On her back is her infant brother. Finding the rhythm of movement, the procession, stretching over a mile long, slowly climbs up the mountainside out of the valley.

Twice each year over the past three and a half centuries, this scene has been reenacted by numerous clans of the Qashqai (pronounced Ghash-gha-ee) nomads, throughout the Zagros Mountains of southern Persia. At any given moment over the next ten weeks, over a hundred thousand people and one million and a half animals will creep over desolate mountain passes or across high alpine meadows on their three hundred mile trek to their winter pasturelands near the Persian Gulf.

Weavers of highly desired Persian tribal rugs, the Qashqai people possess a history and culture rich in both struggle and inspiration. It is the combination of these two elements which give their antique rugs their unusual sense of spontaneity and aliveness. 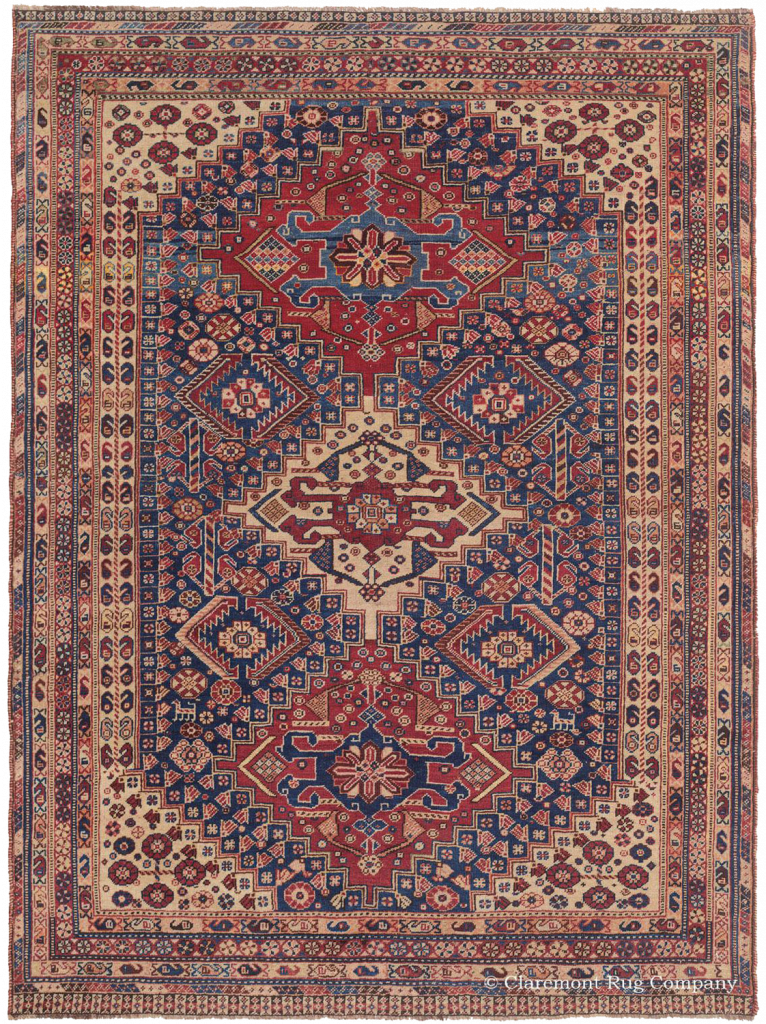 Although the Qashqai have never recorded their history in writing, they have passed it down through story and song for nearly a thousand years. In their legends they claim to have come from Chinese Turkestan, sweeping across Afghanistan into Persia on the vanguard of the armies of Ghengis Khan. Once in Persia, the Qashqai chose to live in the mountainous region of Azerbaijan, in the Caucasus, far to the north of their present southern Persian location. Early in the 16th century, the Qashqai relocated to the Fars province, their habitat over the past 400 years, probably under the subjugation of Shah Isma’il, who wanted to create a human buffer against the Portuguese, who threatened his Persian Gulf shore.

Although for the most part a group of loosely related Turkic tribes, the actual tie between the numerous Qashqai subtribes is political in nature. Around the year 1600, under the command of Shah Abbas, Jani Agha Qashqai took on the task of bringing order to the various Qashqai groups. To achieve this, he formed the Qashqai Confederacy, an elaborate structure that survived far into the 20th century in the face of over 300 years of almost continual political upheaval in Persia.

Part of the Confederacy’s long term stability is due to its willingness to assimilate neighboring peoples of varying ethnic origin. It provided a melting pot that embraced groups of Kurdish, Lor, Afshar, and Arab heritage. Each of these peoples has had a significant effect on Qashqai rug weaving. 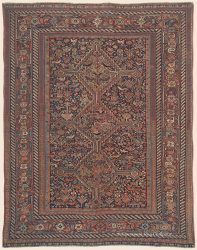 In actuality, the Qashqai Confederacy comprised a highly structured nation-within-a-nation. At its highest level, it has been traditionally governed “il Kahn,” a direct descendant of the family which founded it. The six major tribes (or “tava’ef”) are divided into numerous clans of several thousand families each, called “tireha.” To add organization on the community level, the Qashqai political system is further divided into herding units of 100 families, each led by a “Kadkhoda.” Finally, a “rish safid,” meaning “white beard of wisdom”, is in charge of the welfare of a group of a few households. This high level of social organization is quite unusual among the nomadic groups of southern Persia. In contrast, the Basseri, one of the neighboring Khamseh tribes, has no organization on a broader spectrum than that of the isolated encampment.

On the local level, a strong sense of community exists between the Qashqai people. Writing of their extended stay with the Qashqai people, American couple Jean and Franc Shor tell of an unfortunate shepherd named Kalish who lost his entire flock of over 100 sheep in a freak snowstorm. The Kadkhoda of the 100-family unit to which Kalish belonged immediately called an emergency meeting, to which each family brought a ram or ewe to help Kalish. As the Shors were told: “This is our way of life. We all share good and bad fortune. No Qashqai household is ever left destitute.”

This supportive interrelatedness extends into the Qashqai carpet weaving process. Squatting over their long vertical looms, up to a half dozen women often work on a single antique carpet at a time. As their fingers tie an endless array of tiny knots, they talk, laugh, and sing together.

A woman will work on her own rug for a period of time, move over to the loom of her neighbor, and then to that of yet another friend, before returning to her own weaving. At the same time, another group of women scours the nearby countryside, gathering mountain herbs, barks, and berries to boil in their collective dyebath. This continual interchange of creative energy, along with the deep spirit of interconnectedness in people engaging together in simple physical activity, undoubtedly is a key element in Qashqai antique rug weaving.

Since the Qashqai people for many generations inhabited Central Asia and the Caucasus before traveling to southern Persia, their tribal rugs are enhanced by influences from all three regions. Similar to the antique rugs of the Turkmen people in Central Asia, Qashqai rug weaving has a boldness and directness, particularly in their dominant triangular central medallion. Through their sojourn in mountainous Azerbaijan, the Qashqai acquired the Caucasian weavers’ love of striking colors and daring combinations of tones. Finally, in their present location, they have been inspired by the artistry of Persian city antique carpets, as well as by that of other nearby tribes. In short, Qashqai rug weaving synthesizes instinctive creativity with refinement, depth of color with richness of symbolism.

The Qashqai are by necessity an extremely physically active people, who have not only survived but have thrived in the face of adversity. As woven diaries of both the artist’s personal and cultural experience, the Qashqai Oriental carpet vividly formulates an ability to say “yes” to the most demanding of circumstances. The fields of their antique carpets are characteristically packed with minute detail, as a myriad of birds, animals, flowers and abstract geometric figures cover literally every square inch.

Along with a menagerie of chickens, peacocks, gazelles, deer, dogs, lions, and other recognizable animals, a Qashqai rug can also include many less distinguishable creatures. An unusual-looking bird is crowned with a triangular plume, in recognition of the force of the earth to which every man is subjected. Another beast has not one, but two heads, reminding us that man is dependent on his relationships for the support necessary in life. Finally, a solitary dog-like quadruped with the tail raised upward is woven with its head toward the edge of the field, symbolizing the belief that each man has an individual purpose which he must face. These principles, which the tribal people view as universal, are expressed in a surprisingly good-humored and appealing manner.

A large part of the Qashqai antique carpets’ tremendous appeal in the West is the weavers’ refusal to sacrifice quality for the sake of expediency. As late as the 1940s, when the weavings of most other tribal groups had bowed to the influence of commercialism which called for more coarsely woven tribal rugs employing the much easier-to-use chemical dyes, there was almost exclusive use of natural vegetable dyestuffs and more traditional weaving techniques among the Qashqai. This attention to detail, in which each step of the weaving process was performed to perfection, is clearly seen in the tribe’s flatwoven kilims and various woven bags, both of which have received attention and admiration equal to their pile rugs. For a tribe that is on the move between summer and winter pastures at least four months a year, conveniently carried kilims and durable storage bags are of central value. For a people who view their daily life as sacred, everything used in their day-to-day activity deserves to express its maker’s highest aspirations.

The Qashqai saddlebag (or khorjin) is an art form, which although on a much smaller physical scale than that of pile antique rugs often has an equally profound effect on the viewer. To gaze at a fine khorjin with its central latch-hooked “diamond of life” motif, to admire its harmonious use of natural red, green, blue, and brown hues, to notice the clarity of design which exists in the most intricate detail is to look through a magical window at a world complete unto itself, a world which seems to span much further in every direction than the weaving’s borders.

The Qashqai carpet continues to hold a special place in the world of oriental rugs, as it expresses a superlative level of both craftsmanship and creative inspiration. And it is no wonder, when two elements remain central in Qashqai culture – “il rah,” the tribal road, and their joyous weaving. As the Qashqai say, “Where I am is my carpet. Where my carpet and I am is my home.”