21st-Century Titans Take Up The Mantle:

By B. Alexandra Szerlip (Two-time National Endowment for the Arts Writing Fellow) 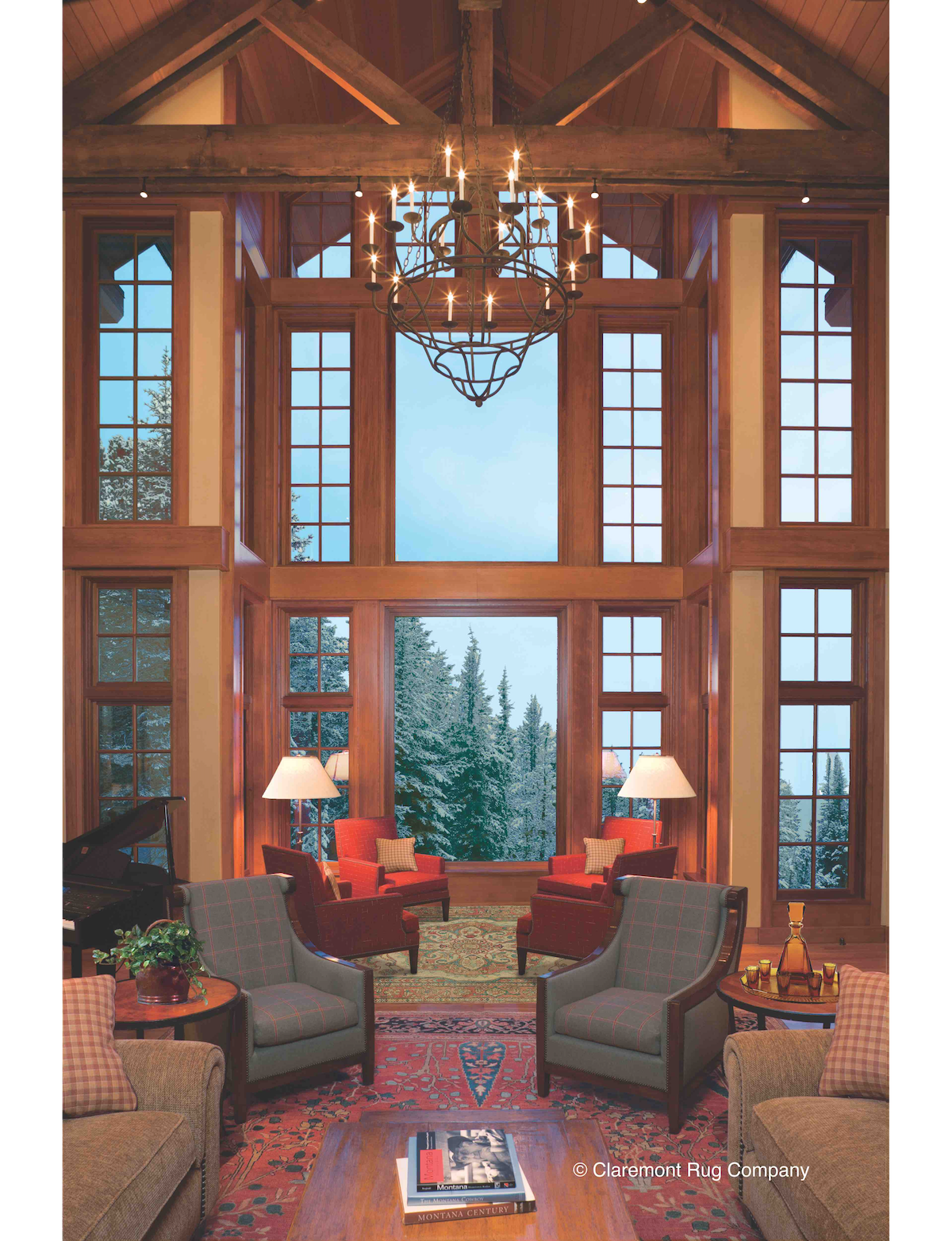 This vaulted Great Room with its spectacular view hosts two High-Collectible Persian antique carpets that add a stirring layer of sublime artistry to the gracious ambiance.

Today, pieces from these collections can be found in New York’s Metropolitan Museum, London’s Victoria and Albert Museum, and other august venues. Such top-tier pieces rarely come to auction, but when they do, they receive considerable attention. In 2013, a 17th-century Mughal rug from the Vanderbilt collection sold at Christie’s for $7.6 million.

For the last 40 years, Jan David Winitz, president and founder of Claremont Rug Company in Northern California, has followed in the footsteps of the art dealers who helped curate and assemble these important, early collections.

To that end, Winitz developed his “Oriental Rug Market Pyramid,” a learning tool based on his long-time knowledge and experience. It has successfully helped 21st-century rug aficionados understand the merits of these extraordinary artifacts in their quest to acquire masterworks for display in their homes (some of Claremont clients’ substantial residences can accommodate 70 rugs or more at a time.)

Winitz’s Rug Pyramid, a six-level ranking of all handwoven Oriental rugs from historical pieces to modern production, takes into consideration every aspect from artistry, craftsmanship, quality of materials, condition, rarity and age to provenance.

“…few galleries and auction houses have much access to Level 2 and Level 3 rugs, the finest pieces woven in the 19th century.”

Auction records for Museum-Level rugs, the highest tier in Winitz’s pyramid -— primarily 15th through 18th- century pieces that the early American mega-collectors amassed — continue to be broken. Several years back, one sold at auction for $9.59 million, a record at the time. In 2013, that record more than tripled when a 17th century Sickle Leaf Kirman, formerly owned by mining, banking and railroad baron William A. Clark and estimated between $5 million and $7 million, pulled in a whopping $33.7 million. 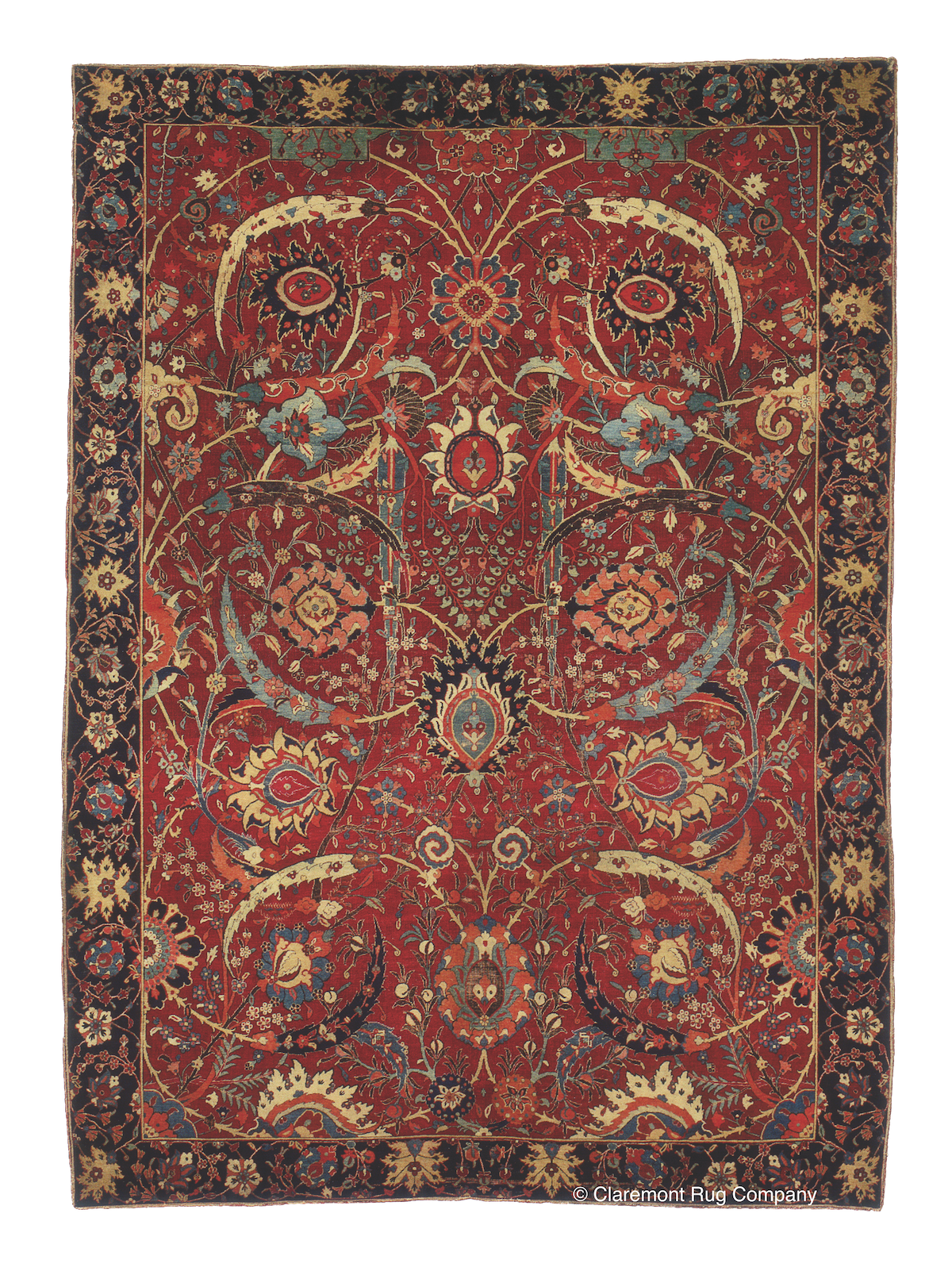 A 17th-century Sickle Leaf Kirman (Museum-Level) sold at Sotheby’s New York auction in June of 2013 for $33.7 million, 3½ times the previous record for an Oriental carpet.

Today, intact Level 1 pieces are incredibly scarce and cost-prohibitive for floor use, and few galleries and auction houses have much access to Level 2 and Level 3 rugs, the finest pieces woven in the 19th century.

Thanks in great part to Claremont’s efforts, the market for these High- Collectible and Connoisseur-Caliber carpets has been escalating. Case in point is Claremont’s “Potomac Collection”, an assemblage of over 130 extremely rare 19th century pieces amassed over three generations by the heiress of a Virginia- based family held this past summer. Given the collection’s exceptionally high merit, this cache was offered for sale by invitation only to Claremont’s preferred clients. Within three months of the opening of this private sale, 80% had sold, a feat that might have taken a year to achieve a decade ago. 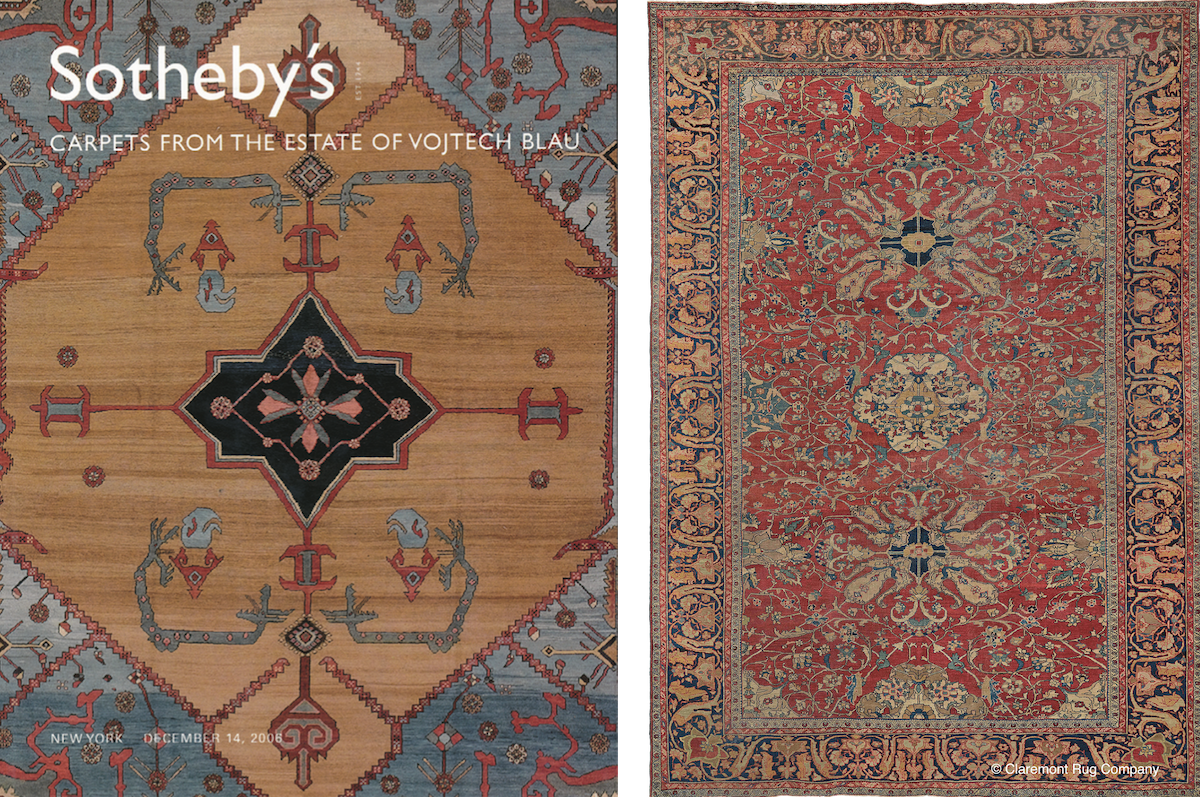 ABOVE LEFT: The cover rug of Sotheby’s catalog for its auction of the Estate of Vojtech Blau shows a 160-year-old Bakshaish, estimated $80,000/$120,000 and sold for $363,000.
ABOVE RIGHT: Persian Ferahan Sarouk, 8′ 5″ x 11′ 11″, circa 1850 (High-Collectible) A crowning attribute that makes certain Level 2 rugs so entrancing is that rather than following traditional designs, they entirely reinvent their pattern language, as seen in this piece’s imaginative multi-winged medallions.

To understand the significance of this uptick of interest in Level 2 and 3 rugs, it helps to gain insight into why broad- scale recognition of these treasures has been so long in coming.

The best of these High-Collectible and Connoisseur-Caliber rugs, which are the epicenter of this elevated collecting interest, were created from the late 18th century through 19th century, during the rule of the Persian Qatar Dynasty.. In 1925, the last of the Persian monarchies, the Pahlavis, came to power, making a point of downplaying the Qatar-period weavings for political reasons, in the same way that newly minted Egyptian pharaohs routinely defaced or destroyed the statues and monuments of their predecessors. This age-old tactic by the Pahlavis is explored in the just-published book,“The Persian Carpet:The Forgotten Years 1722-1872” by Hadi Maktabi. It says: “From the political perspective, the Safavid period was lionized, and all subsequent art history was dismissed until the restorative dawn of the Pahlavi rule” (p.7). 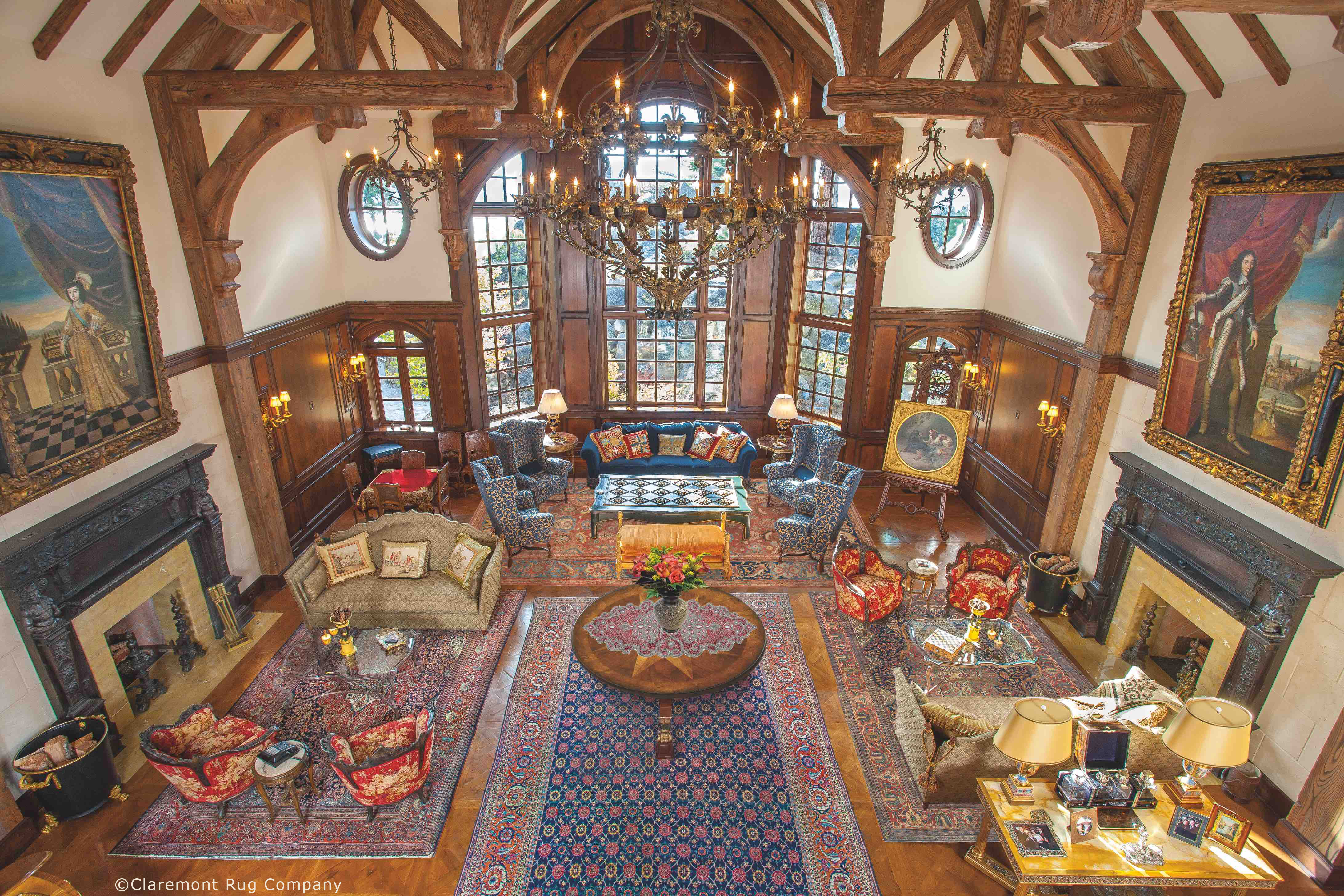 A suite of four rugs, containing two High-Collectible Ferahan Sarouk carpets in the left and right seating areas, a Connoisseur-Caliber Sultanabad in the rear space and a High-Decorative Veramin rug in the foreground.

This practice slowed the recognition of great 19th century rugs, as it facilitated the rug market’s misunderstanding of what constitutes true quality. Over the last century, it traditionally graded Oriental carpets primarily by knot count and pile height, elements favored in the 20th century Persian decorative rugs (Level 5) that the Pahlavis orchestrated—instead of at times astonishingly original artistry and colorways reflected in the carpets of the preceding century.

Another contributing factor in the delay in recognizing the artistic heights reached by the best 19th-century rugs is that the majority of those purchasing art today often make choices based to a large extent on recognizable “names” — Picasso, Matisse, Jasper Johns, Warhol to mention a few. Winitz stresses,“Imagine if these works were unsigned. That there was little evidence of who made them, or exactly when. Imagine how much more difficult it would be if a work of art had to be taken completely on its own merits, its emotive and aesthetic impact,” Winitz asserts, “This is exactly the situation with Oriental rugs.”

Signed rugs are mostly inscribed with the name of the person who commissioned them, not the weaver or workshop that wove it. In most cases, carpets can be identified only by the locale where they were woven (Sultanabad, Tabriz, Bijar, etc.). But even then, eight out of ten 19th century pieces fall into the fashion-driven High-Decorative category (Level 4)—primarily woven for the European market — handsome but often lacking visual depth and unique artistry. 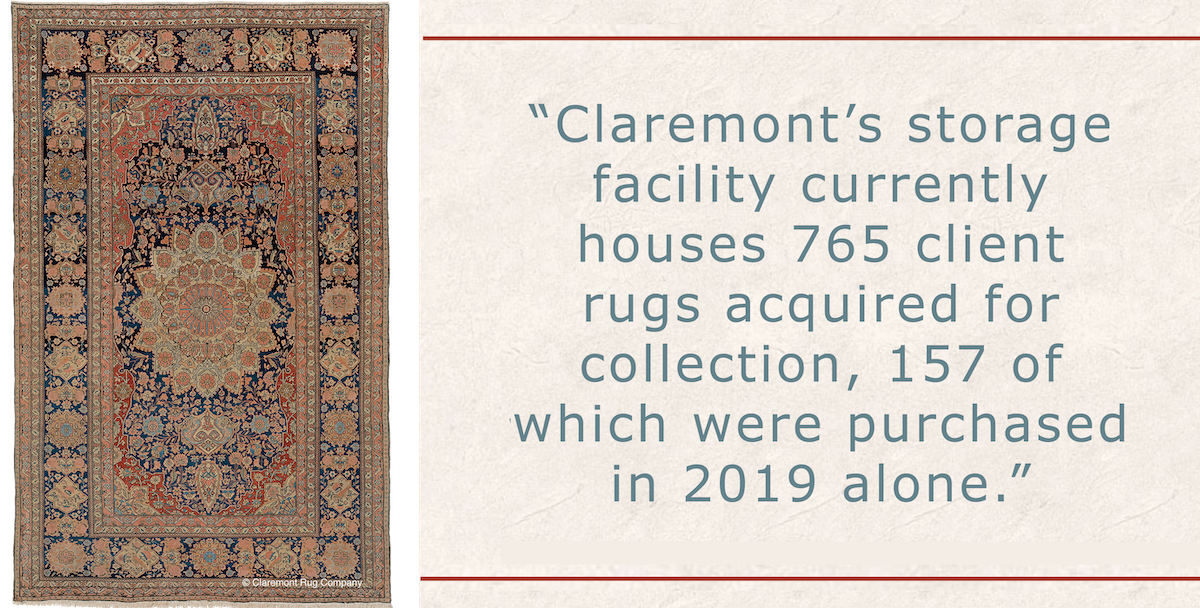 Furthermore, demand for all but the best of High-Decorative rugs, Winitz notes, has decreased due to contemporary home design, which the general affluent public incorrectly sees as incompatible with antique rugs. Among his clients, many are successfully incorporating 19th century rugs into their contemporary decors, as are style- makers such as Ellen DeGeneres, he adds.

One way to spot serious collectors is by their ‘overflow’ inventories. Claremont’s storage facility currently houses 765 client rugs, 157 of which were purchased in 2019 alone. 350 of the stored pieces belong to a single collector. Eighteen other clients in the United States, Italy and Australia have opted to create their own rug “vaults”, dedicated, cedar- lined rooms; one houses 325 pieces, another 195. 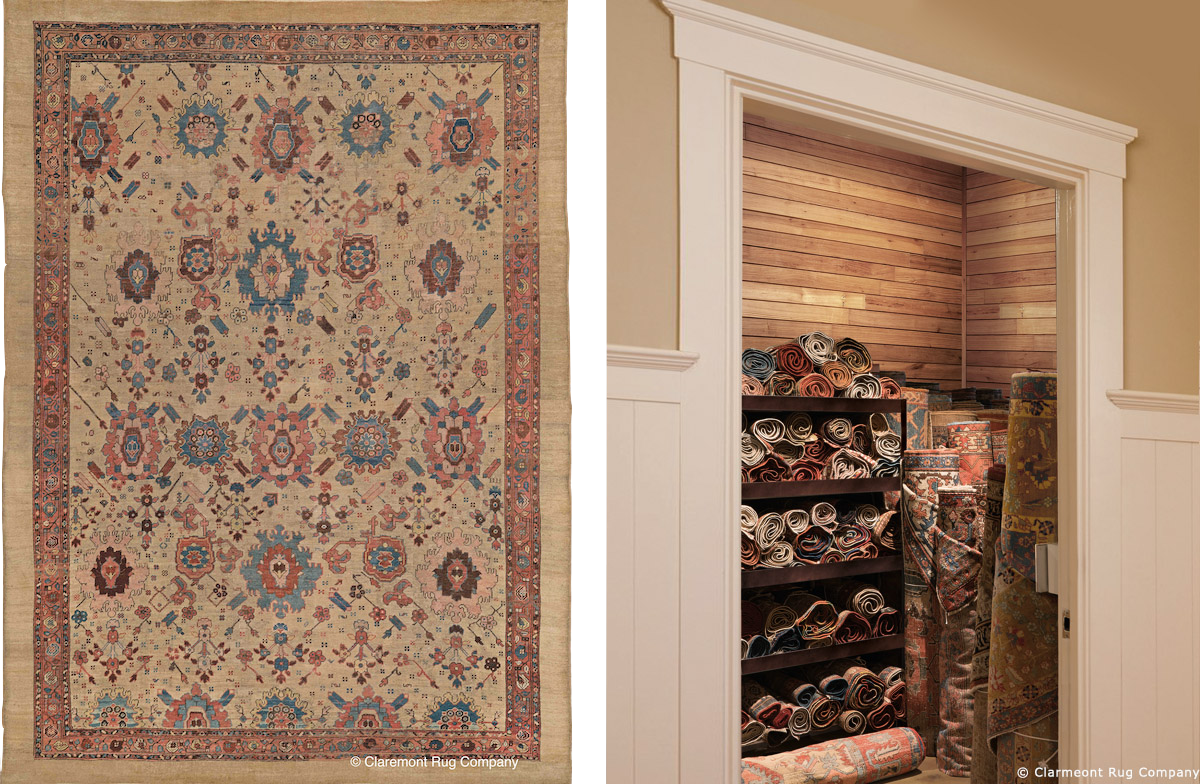 ABOVE LEFT: : Persian Bakshaish Camelhair, 8′ 0″ x 11′ 1″, Early 19th Century (High-Collectible) This two-centuries-old representative of the highly prized Persian Bakshaish Camelhair genre was one of the Crown Jewels of Claremont’s “Potomac Collection” invitational event.
ABOVE RIGHT: A peek into the rug vault of a Claremont client who collects both small size and room size High-Collectible pieces.

So why stockpile? Motivations vary. Many collectors recognize the discrepancy between the perceived value of an art-level antique rug and other types of art and are convinced that Levels 2 and 3 rugs have yet to come into their own and, like Museum-Level rugs, their availability will continue to decrease and their worth will continue to accrue. Somewhat to her own surprise one Claremont client noted when viewing the suite of antique rugs in her home gallery of favorite paintings, “I love my rugs more than I love my Diebenkorns!”. Other clients are motivated, in part, through the recognition of the notably decreased access to these top-tier Qatar period weavings. Still others view their caches as tangible inheritance assets to be saved for their children. 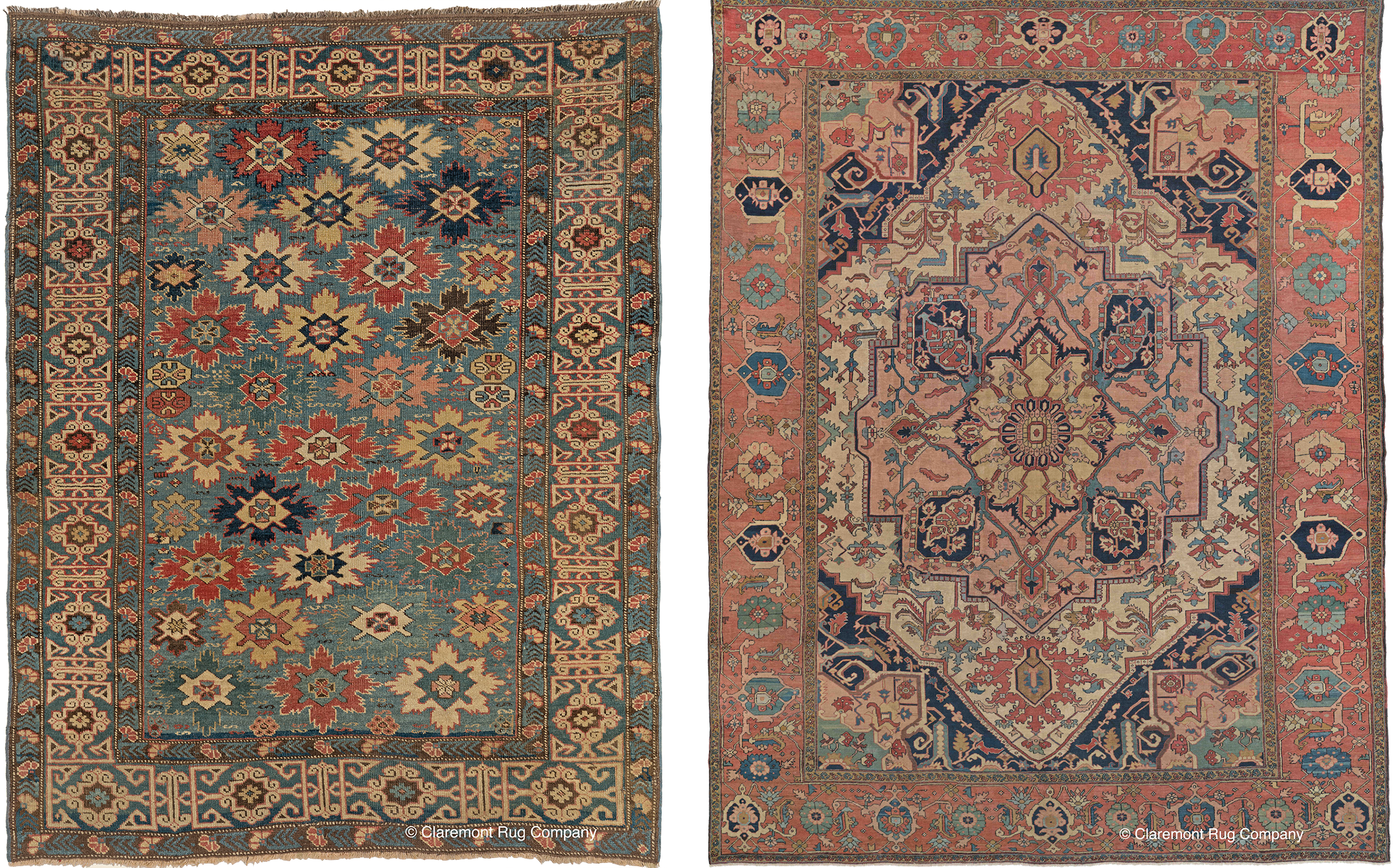 And there is the added benefit of getting to create one’s own private, rotating displays. Collectors with more rugs than they can display enjoy periodically “switching things up.” Winitz notes that when his team lays down stored inventory (Claremont provides an annual rotation service for major clients), it is not uncommon for the client to remark, “It’s like an old friend coming to visit.” Such emotional attachment isn’t unusual. “Selling my rugs,” collectors often say, “would be like selling my children,” a comment they don’t usually make about the other artworks they own. “The emotional as well as intellectual and visual effects that great rugs can have — that’s what makes art so compelling!” Winitz explains.

“The eyes of clients continually get honed, just like a wine connoisseur develops a more ‘mature’ palate,” he continues. “They learn to almost instinctively recognize the difference between a “pretty” rug, an outstanding one, and one that’s a true masterwork.” New visitors to Claremont often comment on how expensive great rugs are. That’s because they’re seeing them through the lens of home furnishings. “Once their eyes have opened up, those same folks often say how undervalued they are as an art form,” he says. Winitz observes how exciting it is for clients to be able to recognize the varying qualities of antique Oriental rugs -— to differentiate between good and great, attractive and profound, commonplace and unique.

“This is one of the most fulfilling aspects of rug collecting for both my clients and myself — when they see the magnitude, nuances and visual harmony for themselves, without having a ‘name tag’ to look at or being told which rug is important and which is not. I’m always deeply satisfied to see the light of recognition in their eyes.”