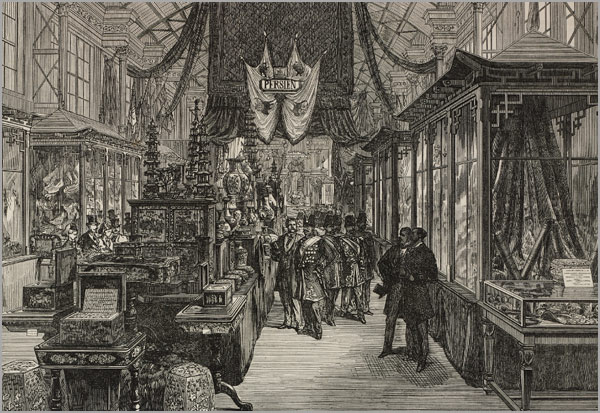 In 1873, the city on the Danube hosted an elaborate world’s fair — The Vienna Exhibition promoting “Culture and Education.” Russia, Japan, and the Ottoman Empire with their displays of traditionally dressed mannequins and replicas of Topkapi Palace and Turkish baths all saw it as an opportunity to create serious interest in the West for Eastern culture. The fourth Oriental entrant, Persia, featured in its pavilion three styles of carpets personally chosen by Qajar ruler Nasser al-Din Shah to represent his country’s weaving prowess. Of the three, one was a stylistic newcomer destined to captivate a world market. 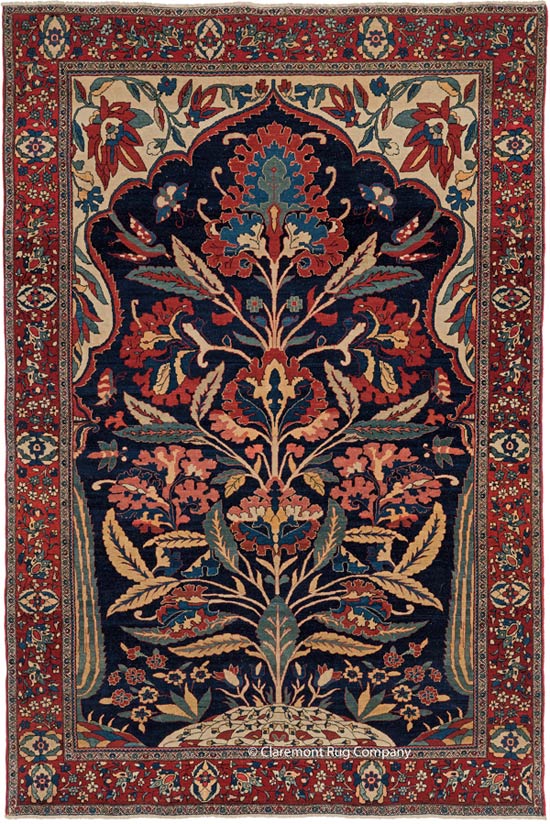 This circa 1875 Ferahan Sarouk brilliantly reinvents the classical “Tree of Life” design.

Auburn, brick and rust reds, morning glory and inky blues, burnished and sun-soaked golds enchanted fair-goers as they strolled past the huge cases displaying this debutant Oriental carpet. Small to extremely large rugs exhibited floral drawing softened by uncanny realism, stately medallions bedecked with constant tiny nuances, and extraordinary finesses of weave. The very best of these carpets from the Persian Ferahan plain over time came to be recognized by connoisseurs worldwide for their inimitable presence, both regal and expressive. 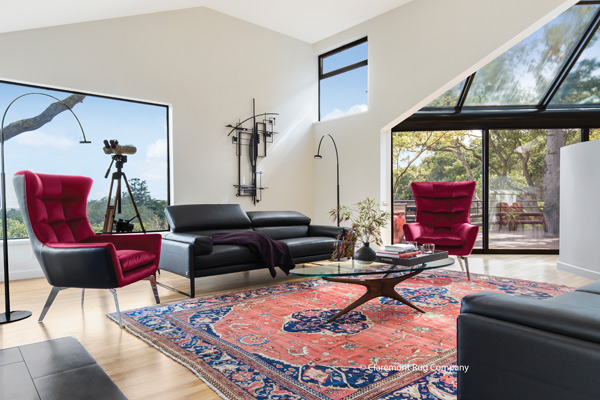 Carpet seen in above image sits comfortably in this contemporary decor benefitting from the generous amount of diffused light that accentuates the spectacular range of sunset reds in the field.

Starting in the 1500s, Persia’s Safavid dynasty had subsidized carpet ateliers that created splendiferous rugs with never-seen-before curvilinear designs of florals and vinery meant to express utter perfection, the zenith of beauty. Many were of great size, blanketing royal palaces and courtiers’ homes, while the rest were used as gifts of state or sold to foreign aristocracy. With the dynasty’s fall in 1736, the royal ateliers closed, marking the end of what came to be known as “Golden Age of Persian Weaving.” 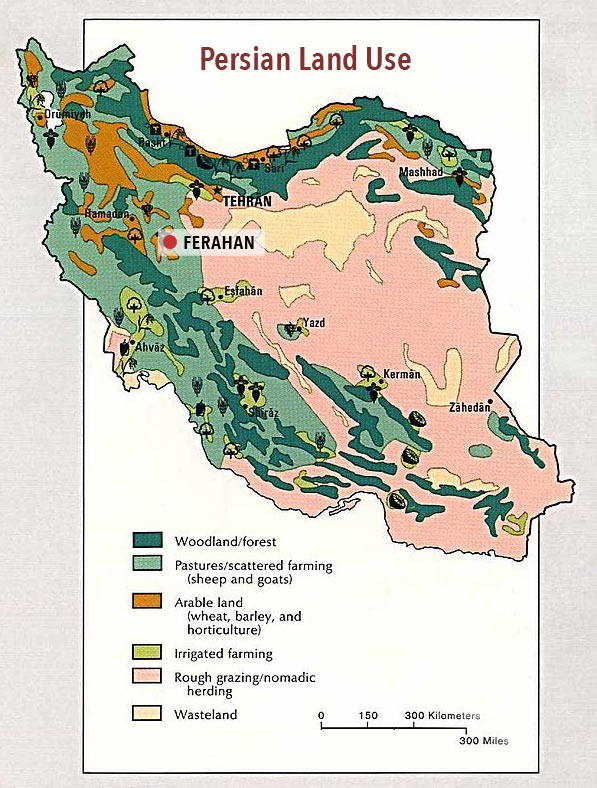 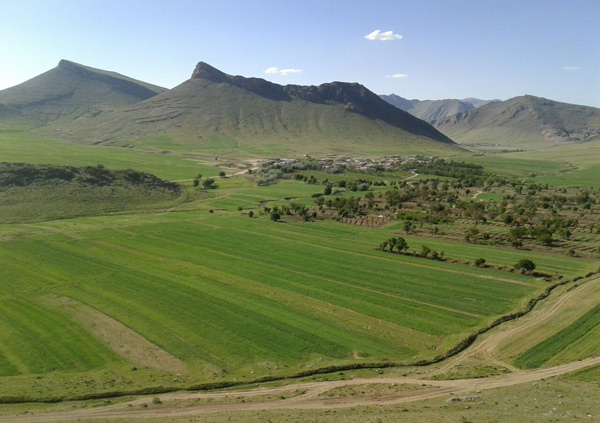 Top: The area around Ferahan consisted of vast area of plains land identified by the lighter green coloration above.
Bottom: A plain in the Markazi Province where the Ferahan district is located.

Yet, within the following few decades, on northern Persia’s verdant Ferahan plain, abundant in water sources and unusually rich grazing land, a new weaving aesthetic evolved. Populated by a loose rug-making consortium of large and small villages, this district had supplied local markets with their varied traditional handcrafts concurrently to the royal carpet production. This bevy of carpet weaving attracted its share of the dismissed artisans from the Shah’s workshops who retained the intellectual property that had created the Safavid excellence, notably Armenians weavers and merchants joined their relatives and contacts in Ferahan.

Left: $33M 17th century Isfahan Safavid rug. Note the perfect drawing of blue teardrops.
Right: Circa 1860 Ferahan Sarouk rug. Note the individualization of the flowettes and leaves on any branch.

Employing the Safavid curvilinear aesthetic as a model, but unbound by its rigorous formal patterns and the mandate of “Absolute Perfection,” Ferahan weavers experimented with creating more naturalistic-looking garden motifs and changing the perfect curves of the Safavid rugs to somewhat more angular ones. Ferahan rugs include individualized flowers, tendrils and vines tilting at charming angles, often so delicate that they appear to be hand-drawn. A distinguishing aspect of this visionary carpet style is how the main borders reflect the rhythms and expressiveness seen in the rug’s interior portion, a departure from other rug categories that used borders as ornate frames.

“Ferahan rugs introduced spontaneity, an improvisational latitude that yielded seemingly infinite permutations,” notes Jan David Winitz, founder and president of Claremont Rug Company, who has studied them for over a half-century. “Part of their brilliance lies in their use of symmetry and asymmetry within a single carpet. The overall effect is a virtuoso sense of visual movement and depth, a nuanced union of formal and naive, floral and geometric,” he says.

“Stately, classical, yet alive with whimsy, the Ferahan aesthetic is like crossing orchestral music with folk songs,” Winitz continues. Ferahan weavers even felt free to scatter tiny motifs such as stars, mandalas and two-dimensional dogs, birds, and plants that may only reveal themselves after the observant viewer has looked closely at a carpet’s myriad details.

And more than any other 19th century Persian floral carpet, Ferahans are individually distinct from one to the next. This diversity was, at the time of the Vienna Exhibition and continues to be, a significant part of Ferahan allure. 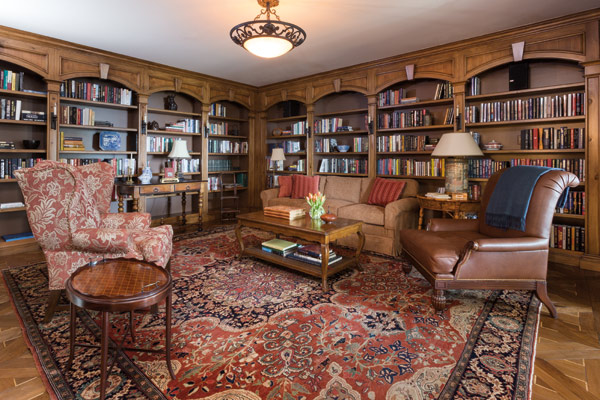