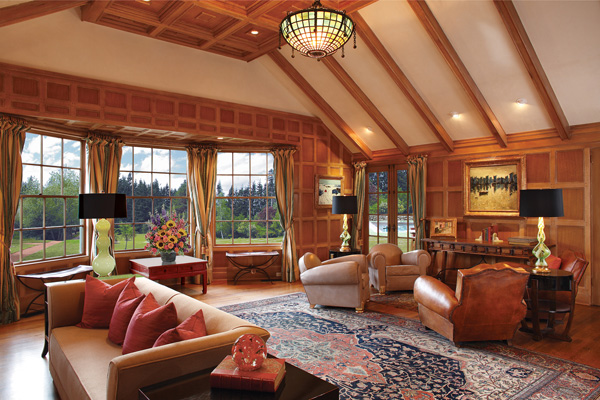 In 1873, The Vienna Exhibition promoting “Culture and Education“ hosted Russia, Japan, and the Ottoman Empire from the East. The fourth Oriental entrant, Persia, featured in its pavilion three styles of carpets personally chosen by Qajar ruler Nasser al-Din Shah. Of the three, one was a stylistic newcomer destined to captivate a world market…

As Ferahan’s market emerged in the 1800’s, Europeans living in the Middle East took notice. Jakob Polak, an Austrian physician who was instrumental in establishing modern medicine in Iran, wrote that “the most beautiful rugs come from Ferahan” — a province said to be home to some 12,500 looms at the time. Commissions of any dimension and design could be made, ranging from ‘area’ mats to palace-size carpets as vast as 15′ x 29′. 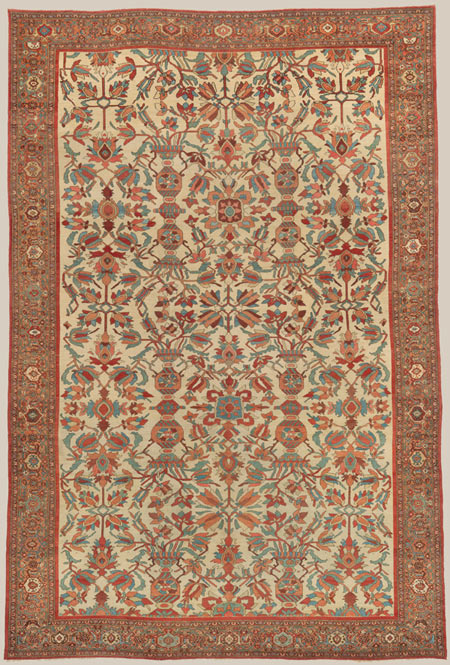 An inspired, extremely finely woven Ferahan carpet circa 1850 with a fluidly presented formal design of both floral and geometric elements.

Accolades such as this undoubtedly encouraged a vibrant export business. Inspired by foreign visitors’ accounts of Ferahan rugs on palace floors and bolstered by investments of royalty and gentry in the larger locally-run workshops, a renaissance of woven artistic expression burgeoned. 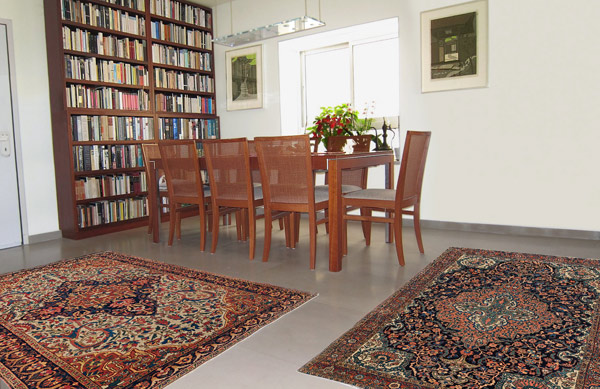 By displaying Ferahan and Ferahan Sarouk rugs perpendicular to each other, these connoisseurs can enjoy the spectrum of artistry of two top-tier pieces from these closely related Persian weaving traditions.

As they had numerous times before, most recently during Egypt’s Mamluk carpet weaving period, Armenians played an instrumental role in the mercurial rise of Ferahan carpets. Their early embrace of Christianity, a faith that allowed for more naturalistic renditions in art than the Islam religion, ultimately contributed to the Ferahan aesthetic. During their long history and travels, Armenian artisans were influenced by myriad ‘foreign’ patterns and techniques, including freeform tribal Kurdish and Caucasian rugs. Praised by authorities such as the Greek historian Herodotus (“brilliant colors”) and Venetian explorer Marco Polo (“the choicest and most beautiful”), among others, the Armenians’ seventeen centuries of unbroken weaving experience established a remarkable aptitude. 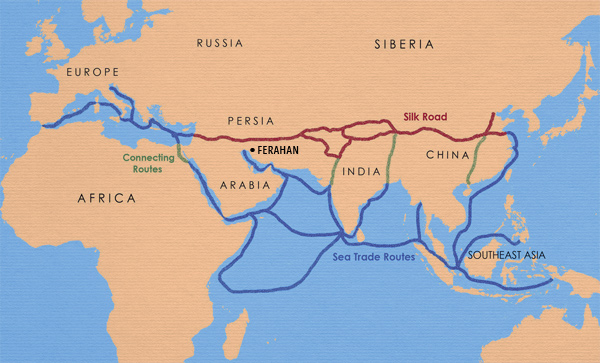 The Ferahan plain which was connected via the Silk Road and sea routes to Europe was so advantageously placed, it became its own export center for rugs without ever becoming a major urban hub.

Armenians also enjoyed great success as maritime merchants from the Middle Ages, establishing trading in the Netherlands, Turkey, Russia and elsewhere, specializing in pearls, diamonds … and rugs. A note by British Chargé d’Affaires William Taylor Thomson that by 1850, the Ferahan province was supplying the majority of the country’s weavings for export indicates a robust mercantile infrastructure – even before their exposure at the Vienna Fair. 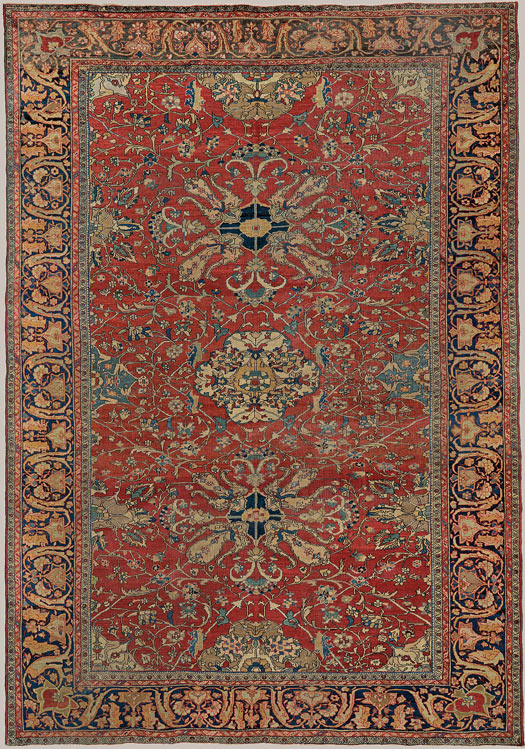 This elegant room size Persian Ferahan Sarouk exemplifies the early aesthetic sensitivity alive in this weaving area which so captivated the country’s rulers and European visitors. 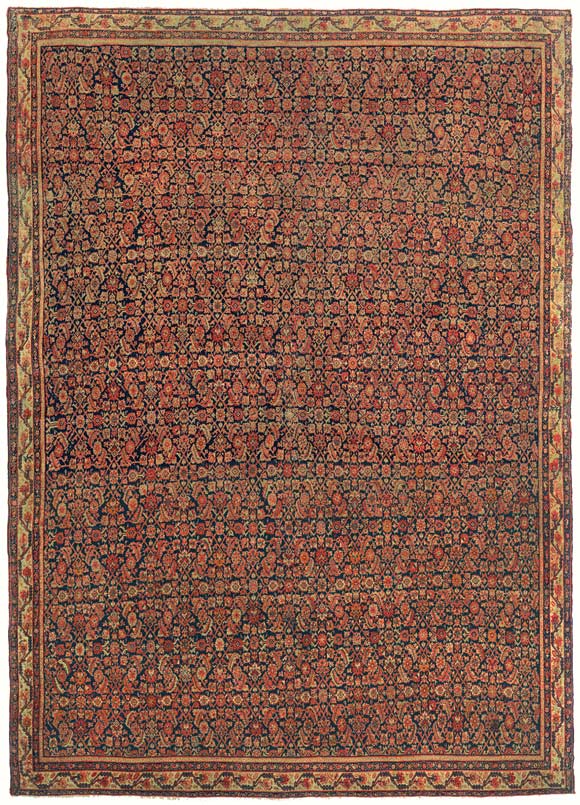 The new style produced sumptuous carpets with two different internal structures or “handles.” One, referred to as Ferahan Sarouk, with an opulent pile and a very sturdy handle, characteristically have large center medallions and elaborate corner spandrels. The other referred to simply as “Ferahan,” is much more pliable, with closer shorn pile, and most commonly feature dense all-over patterns. In Great Britain, where the Ferahan style gained significant popularity, it became known as “The Gentleman’s Carpet.”

“Some Ferahans are bold and demanding, while others are quiet and sophisticated, inviting close contemplation.”

“Some Ferahans are bold and demanding, while others are quiet and sophisticated, inviting close contemplation,” Winitz observes. And yet, the sensitive viewer can always tell that Ferahans and Ferahan Sarouks are branches of the same family.” To this day, the nomenclature is often used interchangeably. (For the sake of simplicity, in this article, the geographic appellation “Ferahan” is used for all carpets from the region.)” he says. 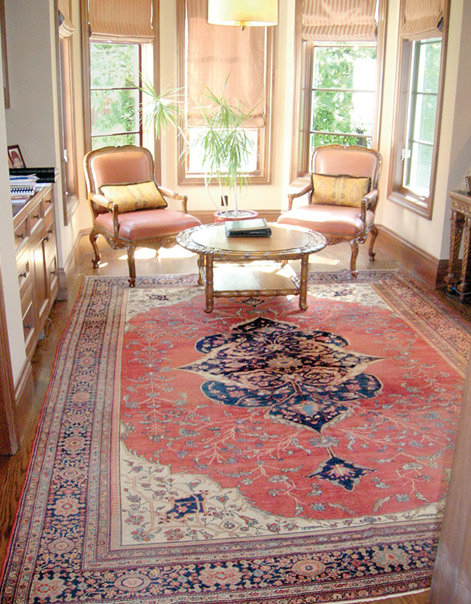 A Ferahan Sarouk carpet circa 1850 graces a home office, its striking medallion format on display epitomizes the artistry of this style.