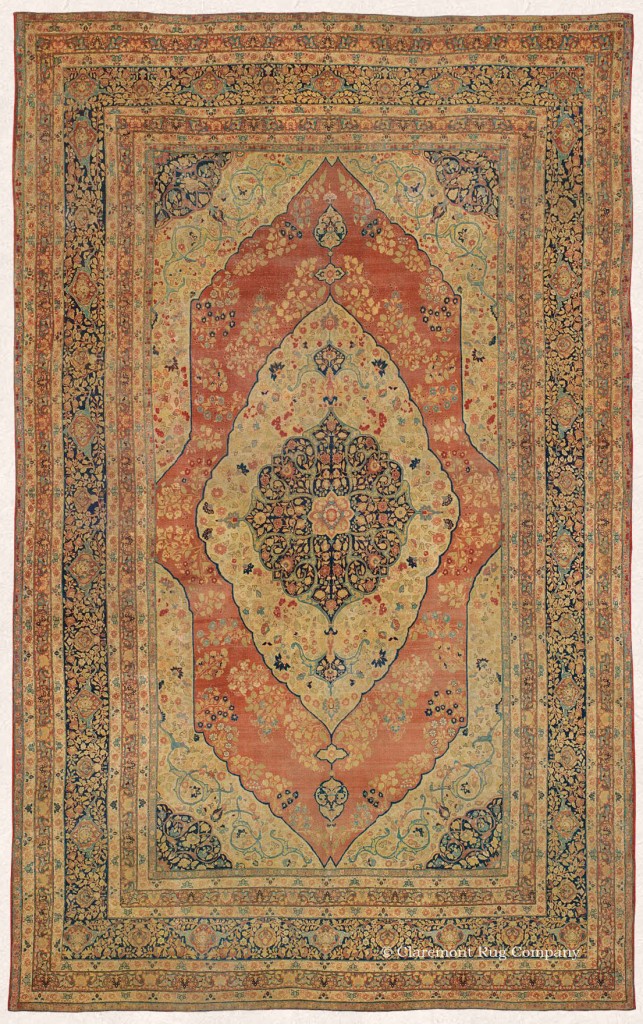 Antique Persian Hadji Jallili (Haji Jalili) Tabriz rug, circa 1850, one of the most valuable rugs from the Houston Collection, currently on display in Oakland,

Hadji Jallili (Haji Jalili) was known as the Persian Monet in the 19th century, when his highly detailed, impressionistic rug designs led the second golden age of Persian rugs. Now a spectacular Hadji Jallili  (Haji Jalili) rug is on the market after a generation adorning a River Oaks mansion.

The museum-quality rug is one of more than 125 in the Houston Collection, a cache of rare 19th-century Persian rugs collected by an anonymous local family before being acquired this year by the renowned Claremont Rug Company. The Collection is available by invitation only at Claremont’s gallery and on its website.

“This gentleman was in the oil and gas industry, so he took many trips to the Near East, saw the rugs there in bazaars and in the homes of his business associates and fell in love,” said Jan David Winitz, founder and president of Claremont.

The energy exec spurred his Omaha-based father to take an interest in rugs as well, and the Houston Collection includes examples from both collections, both the more floral, classical Persians crafted in cities such as Tabriz, Iran, that were favored by the younger collector and the more folkloric, geometric, loosely woven rugs from the countryside that were preferred by his father.

“His daughter, who is also a collector, told us there were many discussions between the two at family gatherings on which style was superior. Her grandfather would advocate for the spontaneity of the rural rugs that reflected the beliefs and lifestyle of their communities and her dad would talk about the grandeur and perfection of city rugs,” said Winitz. “These gentlemen really knew what they were doing. Everything is spectacular, there are just so many great pieces and in such good condition. Even for our clientele, it’s a special, exciting find.”