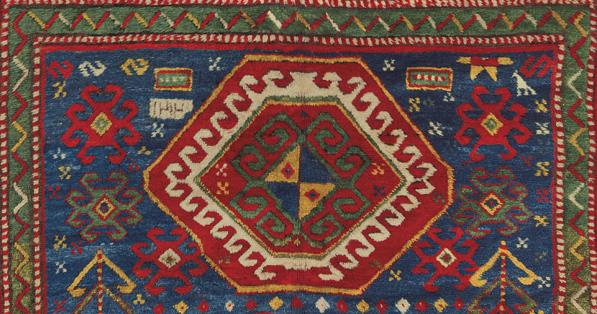 A “Running Water” design appears in the green border and an ivory “Wheel of Life” motif floats in the crimson hexagon of this Kazak rug.

Having bought my first Oriental rug while still a teenager and opening my gallery in 1980 at age 25, I have passionately studied antique rugs as a collector, an art dealer and a lover of beauty. Over the years, antique Caucasian rugs have come to take a central place in my heart and mind.

In this two-part article, I will explain what various symbols used in Caucasian rugs may have signified to their makers. I draw as one of my primary sources Ian Bennett’s pathfinding book “Oriental Rugs: Caucasian” (1981) that identified 85 subgroups of these rugs, all sharing the symbolic motifs that the primarily female weavers incorporated into their designs. I also believe I occupy a unique position to comment on this rich symbology, as over a three-decade period, I was privileged to have many in-depth conversations with elderly tribespeople who were the descendants of the weavers. 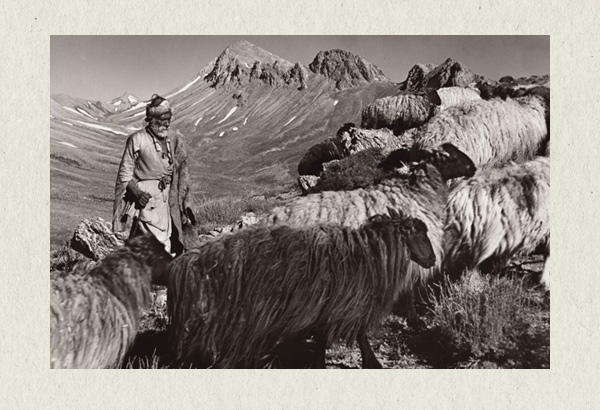 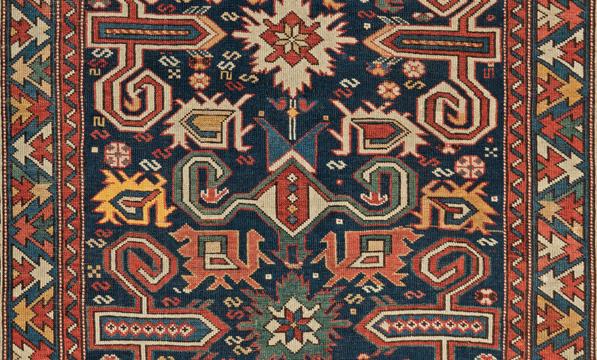 Above: Shepherd herding his flock into the summer high pastures of the Caucasian Mountains.
A green ram’s horn device can be seen in the middle of this detail of a late 19th century Caucasian Perpedil, circa 1875.

The weavers of the towering Caucasus Mountains lived in extremely harsh conditions, whether they were part of a nomadic or agrarian culture. I believe that it was this challenging lifestyle that inspired them to portray the elements of the natural world and their inner significance so often in their rugs.

The tribespeople appreciated whatever provided sustenance and considered it sacred. One oft-used motif in borders of Caucasian rugs is “Running Water,” which acknowledges its preciousness in their lives, literally begetting and sustaining life. The “Running Water” motif was also symbolic of the possibility of inner purification. 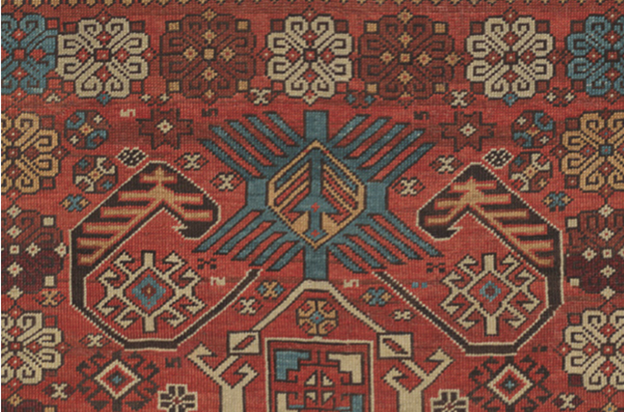 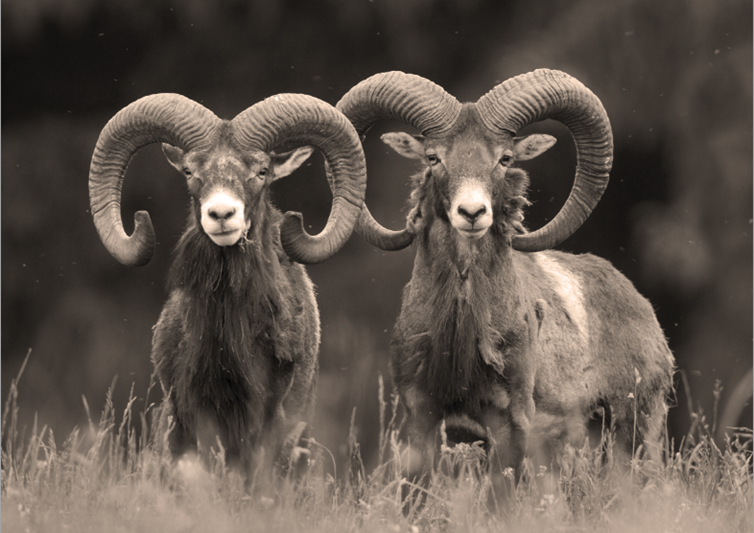 Above: Magnificent “Ram’s Horn” motif in field of mid-19th century Bidjov Shirvan amid a sun symbol and pinwheels.
Ovis Orientalis or the Armenian Mouflon of the Caucasus, still can be seen roaming the slopes.

Rug-making in itself was considered a sacred activity for the weavers.

The weavers found a particular resonance with the “Wheel of Life” design, which for them represented the ever-changing, cyclical aspect of nature. This ancient mandala reminded the tribespeople that life events and the struggles that they bring are temporary. They believed that going through them willingly builds the strength to deal with difficulty and helps one to gain the wisdom to handle any situation appropriately.

Throughout the Near East, various tribal groups found inspiration in animals and birds, appreciating the qualities they demonstrated. Providing sustenance, labor, and wool to the nomads and farmers, animals and birds also took on a profound spiritual and cultural meaning. Interacting with them daily throughout their lives, over centuries, the tribespeople developed a symbology that celebrated each species’ characteristics. 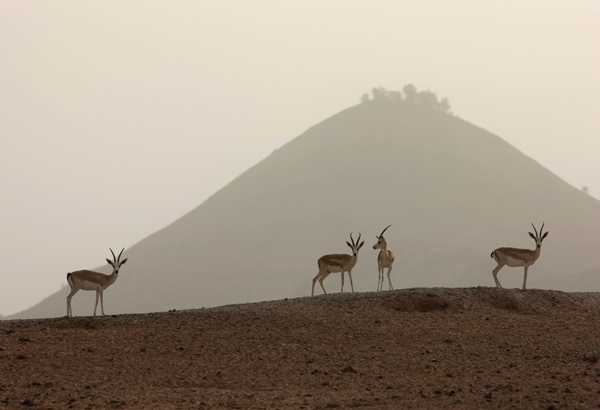 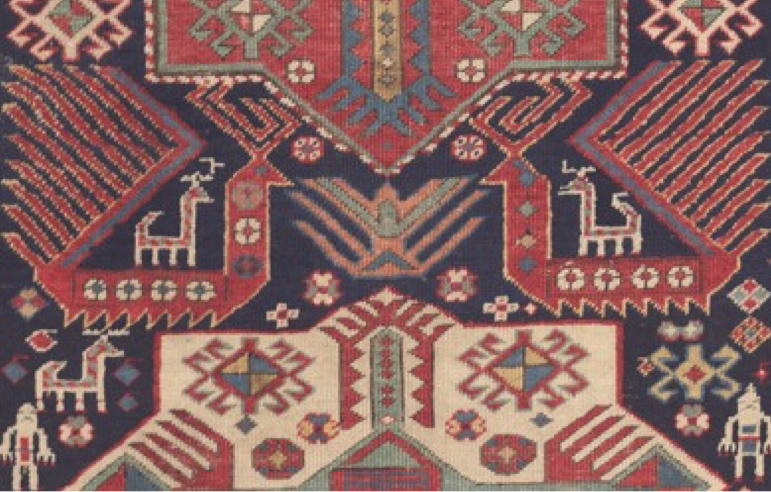 Above: Persian gazelles are known to have existed as early as the 4th century BC.
Gazelle motifs sitting on top of peacocks are depicted in a Caucasian Shirvan, circa 1875.

Sheep afforded warmth and comfort from the clothing and rugs made with their wool. Rug-making in itself was considered a sacred activity for the weavers; the wool and dyes they gathered from nature were transformed into items of beauty manifesting their unique artistic vision.

Since time immemorial, ram’s horns have been revered as a symbol of the power of imagination and inspiration, and of the energy to act from these attributes. The “Ram’s Horn” motif is found throughout the rugs of the different Caucasian sub-groups as a major or minor element in the design, having an enigmatic, energizing effect wherever it appears. In many cultures, a ram’s horn played of seminal role of summoning people together, another essential association for these people. 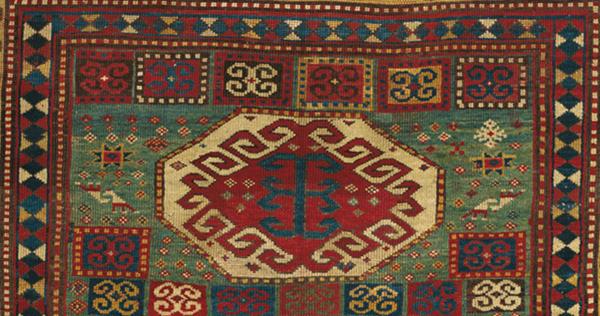 Above: A crimson “Wheel of Life” on an ivory hexagon is surrounded by double ram’s horns in beaded frames.

Above: Two gazelles and two dogs decorate the edge of the field of the circa 1850 Fachralo “Triple Medallion” Kazak.

The tribespeople saw in the gazelle an innate ability to seemingly effortlessly navigate rugged terrain. The gazelle often appears in Caucasian rugs, representing that the virtues of strength and agility are needed to overcome harsh environments. It inspired the tribespeople for millennia to meet challenging situations with lightness and inherent nobility. Almost always added in rugs as charming secondary motifs, they contribute grace and dignity to the background of the design.

A major symbol throughout many ancient cultures, peacocks are associated with spirituality and integrity. Among the Caucasian weavers, they were a reminder of the natural beauty and the presence of beneficence in their lives. This bird’s iridescent plumes represented an overwhelming beauty at once earthly and heavenly. The tribal people recognized the external wealth of the natural world and a corresponding inner richness that one could cultivate. 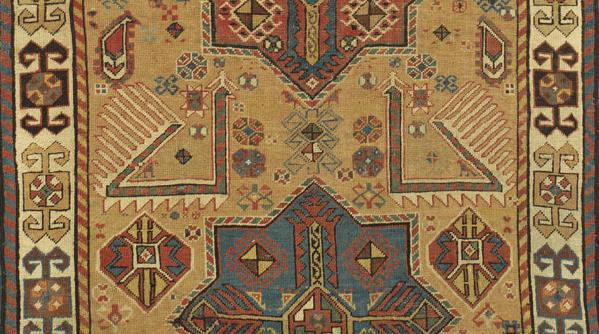 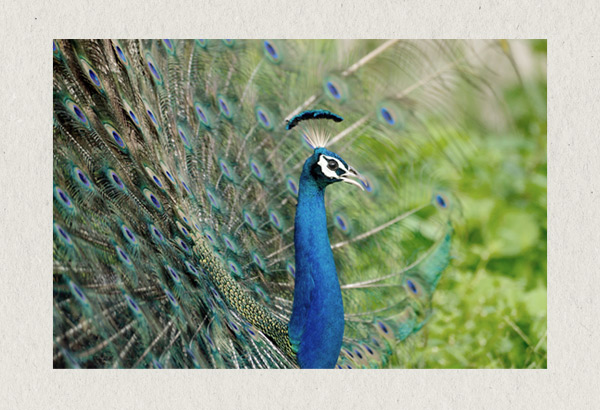 Above: A 170-year-old, rare camelhair Akstafa rug with elemental peacocks and numerous enigmatic symbols.
To them a mythical and mystical bird, the Caucasian tribal weavers graphically emphasized the peacock’s radiant energy.

The birds and animal motifs, as with all the symbols in antique Caucasian tribal rugs, were integral not only to a rug’s pattern as a whole, but to what the weaver wished to express. During all of my conversations with the tribal elders, I was told nearly every element in tribal rug design was both artistic and inspirational in nature. I will explore additional symbolic motifs next week. 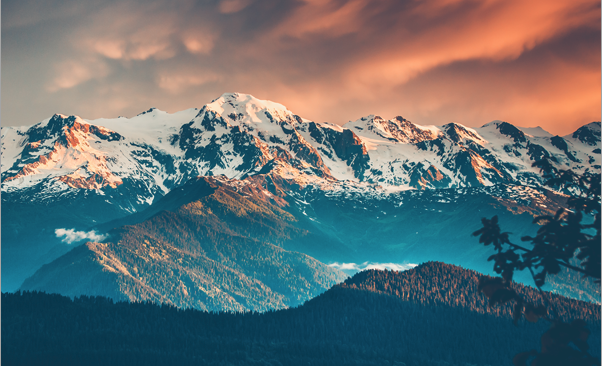 Based on many conversations I have had over a three-decade period with descendants of the tribal weavers, I will explore three archetypal motifs relating to the depth of character that one can gain by overcoming adversity in life.

One commonly employed symbol, “The Mountain,” that appeared in the guard border pattern of many rugs is represented by a sharp zigzag in which both sides represent mountains. To the tribespeople, this symbol evokes the towering peaks that surrounded the weavers’ villages and encampments and the power and stability of the earth. “The Mountain” also was associated with mankind’s need to climb up both literally and figuratively in order to comprehend the environment and life circumstances more clearly. Represented by “The Mountain”, the tribespeople held the belief that developing the attribute of constancy within oneself could be attained through practicing looking from a higher, more inclusive perspective. 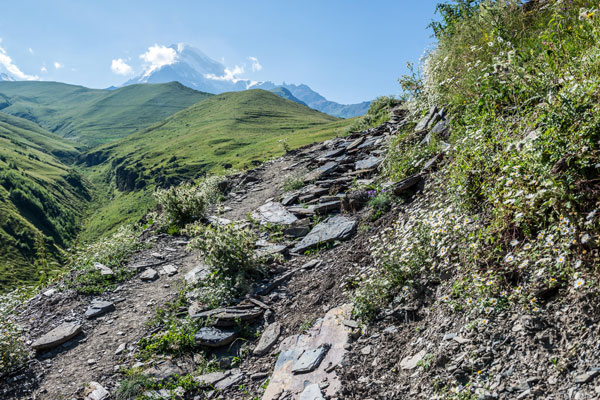 Above: Trail heading from Stepantsiminda, the remote main settlement of the Kazbegi Municipality–
at the base of Mount Kazbek, a 16,581-foot high peak in Georgia.
Below: Border suite from a 170 year-old Bird Shirvan using two “Climbing Strength” guard borders
that support the main frame with a repeating stylized “Dragon” motif. 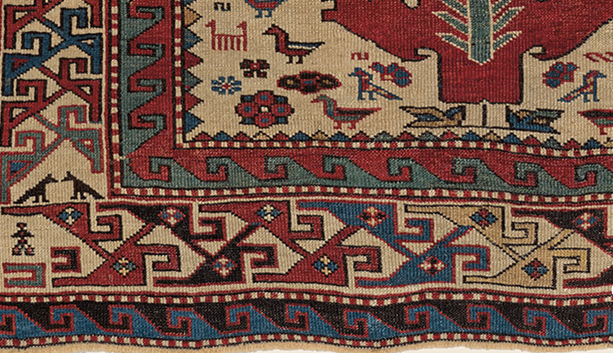 Another symbolic motif used in Caucasian rug guard borders was translated by those I interviewed as “Climbing Strength,” illustrated by a repeating hook design that resembles a breaking wave. Commonly referred to as “Running Dog,” the descendants of the weavers I talked to offered a more esoteric angle. “Climbing Strength” to these mountain people referred to their mutual experience of hardiness developed by interacting with the formidable terrain and its inner equivalent, obtained by repeatedly overcoming life’s continual challenges. It was held that eventually, one could gain sufficient inner resilience to meet difficulty from a willing, even joyous posture. 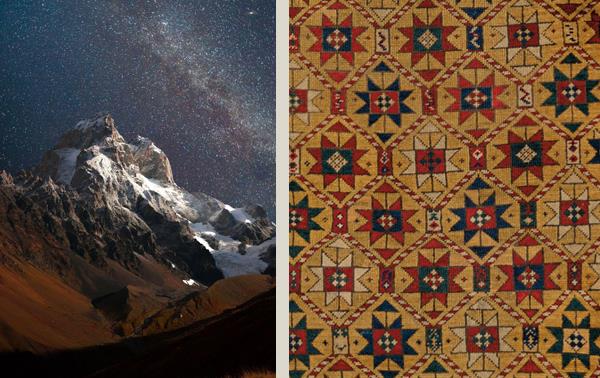 Above left: A view the Caucasian weavers would have enjoyed of the star-filled sky above 15,453 ft Ushba Mountain in the Caucasus upper range.
Above right: Circa 1850 Gendje rug with golden field filled with “Star of Wisdom” motifs.
Below: In the center of a Wheel of Life sits a single 8-pointed star in a Fachralo Kazak rug with a Mountain main border.

One of the most often used symbols was the eight-pointed star, which the tribespeople referred to as the “Star of Wisdom” that sometimes appeared as the centerpiece of a rug or repeated many times in the field or borders. The “Star of Wisdom” reminded them of their potential to develop an understanding — which they believed to be their greatest possession — of the forces that guide the cosmos and their position in relation to those influences.

“There is nothing in this world, but is a symbol of something in that other world.”

The harsh physical environment of the Caucasus Mountains and their awesome beauty inspired the most sensitive weavers to create rugs that depict many essential aspects of tribal cosmology in a profound and often whimsical fashion. Close examination reveals that their weavings are replete with enigmatic designs whose deceptive simplicity reveals great philosophical depth. As the 11th-century Sufi philosopher Al-Ghazali said, “There is nothing in this world, but is a symbol of something in that other world.”

The panoply of Caucasian symbols has virtually countless iterations, as every weaver expressed her own sense of these traditional motifs and reinvented its presentation.

Though symbology has long been a taboo subject in carpet literature due to the great difficulty in corroborating specific ancient meaning through the mists of time, it seems safe to conclude that tribal rugs were not created entirely ex nihilo. Rather, they reflect the worldview of the peoples that produced them. As James D. Burns observed in his “The Caucasus: Traditions in Weaving” (1987), “As rugs were virtually the only art form the tribespeople created, they naturally concentrated cultural and religious significance.”

In the striking geometries of the rugs, there is an interplay between design and color that offers a profound visual commentary on an underlying balance and harmony that the tribespeople felt exists in both nature and the cosmos. The nomadic and tribal lifestyle created an infinitely more intimate relationship with the natural environment than we can even imagine. Working on small, portable looms under the endless skies of the rugged Caucasus Mountains, weavers directly experienced the impact of epic cycles of nature and sought to express their sense of an immutable cosmic harmony. 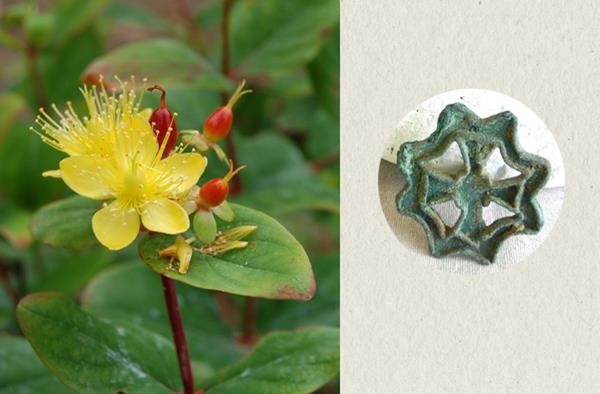 Left: Progenies fruits madeira iran hypericum, a rare tree that grows in Iran and the Caucasus, with star-shaped flower and fruit.
Above right: The ancient 8-pointed “Star of Wisdom” symbol in Bactrian copper seal, 2500 B.C. to 1600 B.C.

The most sensitive artists strove to capture these natural principles in their rugs, viewed through the lens of their cultural experience and physical geography. For millennia, the Caucasus was host to a succession of religious influences — Zoroastrian, Confucian, Islamic, Christian and Sufic — but these symbols predate all of these influences. Through immersion in the rhythms of the natural world, the weavers depended on balanced, harmonic relationships for their survival, embraced the concept of “Unity in Multiplicity”, and strove to capture their vision of it in their rugs.

Often in the best rugs, a staggering amount of pattern is presented without the sense of being busy. Each motif and color shift has its integral place in the composition, just as in the ecosystems in nature, the smallest element has an integral part to play in the unified whole. This adherence to an overall balance and harmony is the underlying principle of a great Caucasian rug. 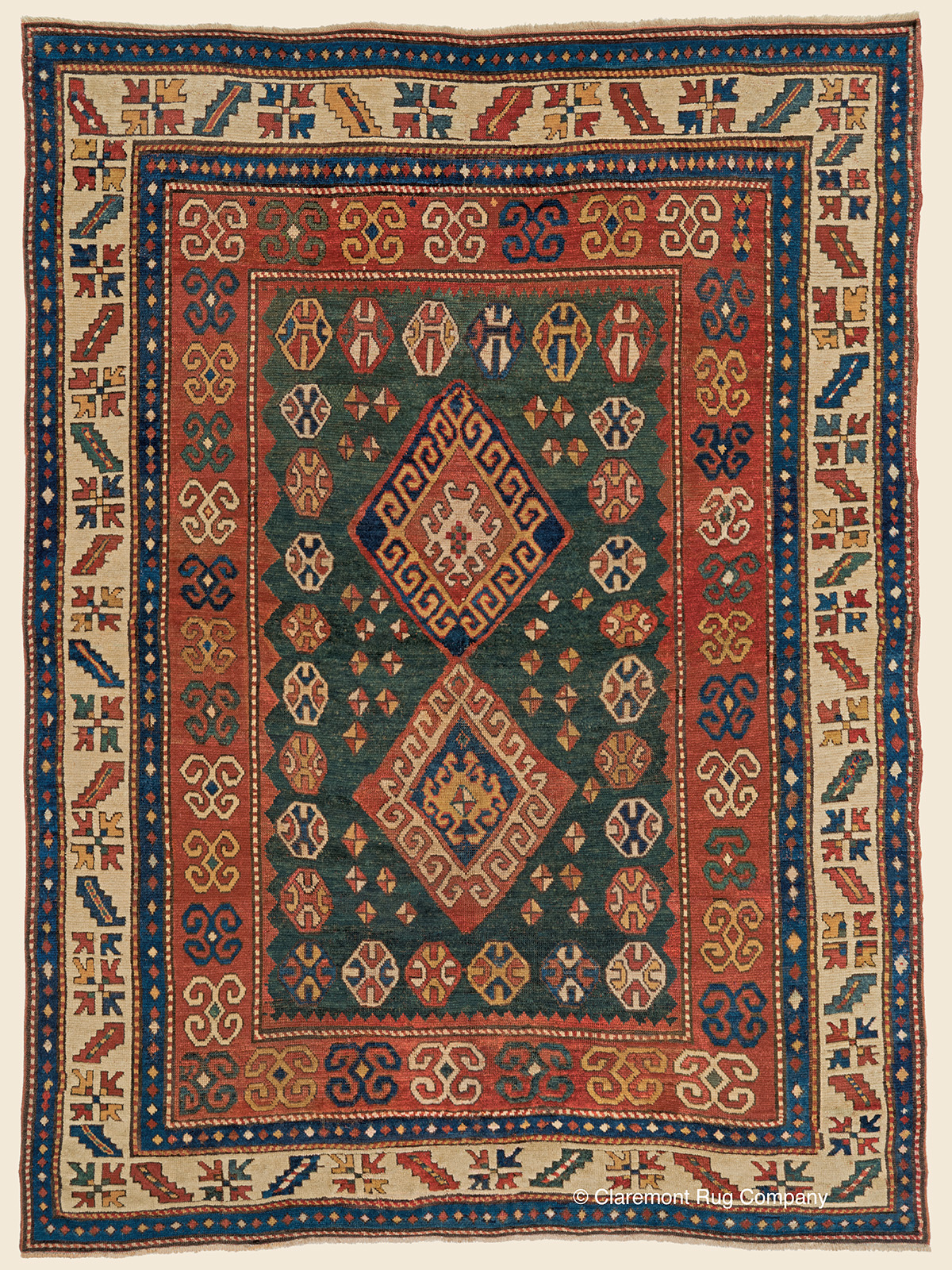 This early Fachralo Kazak is a profound example of balance and harmony that is grounded in a combination of exactly complementary, rare shades and the fluidity that results from constant small moments of spontaneity.
[contact-form-7 404 "Not Found"]