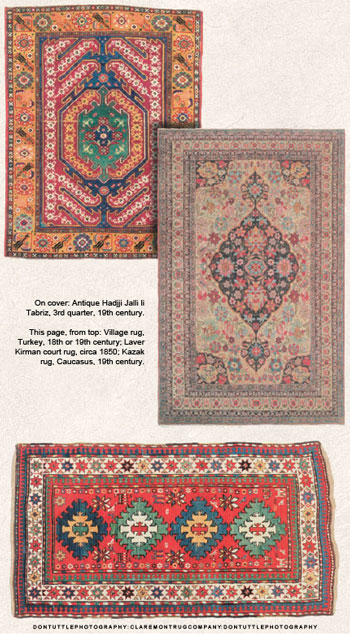 In 1932, a New York engineer, Arthur Arwine, artfully recreated the plush atmosphere of a Turkmen yurt in his Sheridan Square apartment by draping colorful carpets on his walls, his furniture and, of course, his floors. This urban hideaway became the meetinghouse for Arwine and a few friends– Anton Lau, a fellow engineer; friends in the film industry, Roy Winton and Arthur Gale; and a scholar and dealer, Arthur Dilley–to discuss all aspects of their common obsession, oriental rugs. The group, who dubbed themselves the Hajji Baba club, after the hero of an early 19th-century English novel about Persia, quickly attracted more members who shared their enthusiasm for collecting in a field that had been quietly gaining steam in Europe and America since the mid-19th-century. Today the club, as president emeritus Kurt Munkacsi reports, boasts around 200 international members–a number indicative of the passionate yet exclusive crowd one might find oneself among when endeavoring to amass a cache of fine-art-level carpets.

The current market for oriental rugs can be broken down neatly into two parts: decorative and collectible. The former is larger and caters to those who buy rugs, essentially, to cover the floors in their homes. “For those using rugs simply to decorate there are certain trends that go in and out of style–like fashion. Often color has a big part in this,” says Sumru Belger Krody, Head curator of the Textile Museum in Washington, D.C. In this category, aesthetics are the main draw, and though buyers might spring for a very fine carpet, it is look, color, or size that drive them to choose one piece over another. 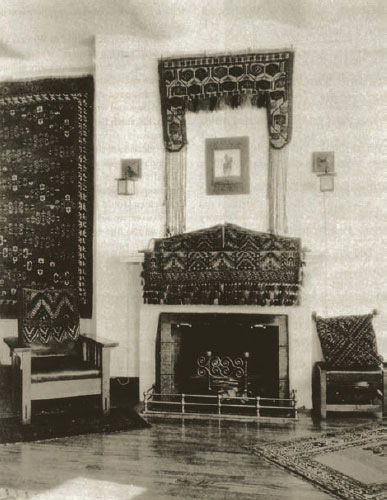 From top: Arthur Arwine’s apartment at One Sheridan Square, bedecked with Turkmen tribal carpets and other weavings, circa 1930; Akstafa long rug. Caucasus. 19th-century.

The collectible market is smaller in size but greater in enthusiasm. It is sustained by those who collect rugs for various reasons– perhaps on the basis of region, time period, tribe or the like–but with the intent to acquire and display their rugs as pieces of art. Hadji Rahimipour, vice president of Bonhams’ carpets and rugs department, explains that he judges fine-art quality carpets according to four features: origin, age, quality of workmanship and condition. “Carpets are not like paintings, which you can’t touch or get too close to,” he says. “Carpets go on the floor–that’s the beauty of the old rugs.”

On the other hand, this traditional placement of carpets–on the floor and underfoot– is to some a stigma that keeps the genre from ranking alongside other pieces of fine or decorative art. Peter Poullada, a San Francisco-based independent scholar and collector, says, “One reason these rugs are undervalued is that they are on the floor. The natural tendency is to think that they can’t be that great if they are lying on the floor, even if a carpet is more valuable than the Georgian chest sitting on top of it. If you can get a rug off the floor and look at it and judge it on aesthetic grounds, then you’ve won a victory.”

Poullada adds that the analogy between carpets and artworks breaks down somewhat because “we can’t celebrate the artist.” But for hard-core collectors, the anonymity of Middle Eastern weavers is no drawback but actually a large part of the interest. What makes each rug one of a kind is the cultural context in which it was created, and this context has a large bearing on style, colors and, consequently, collectability. The most sought after rugs in today’s collector market are tribal rugs– those woven by nomadic peoples in Central Asia, Iran, Afghanistan and elsewhere– and these are the most geometrical and abstract in their designs.

Jan David Winitz, president of the Claremont Rug Company in Oakland, Calif., describes tribal rugs as “pieces of true folk art.” Beautiful as they are, their geometric patterns were not created solely for aesthetic purposes, but recall a symbolic language that was used among tribes. Munkacsi says, “Once you get into the textiles and rugs you get completely wrapped up in the history of Asia. I like the Turkmen geometric rugs; the different patterns are totems of different tribes, and when one tribe took over another the totems change slightly.” The designs and knots of these tribal rugs are so distinctive, says Rahimipour, that “sometimes we’ll turn a rug over and see a different type of knot beings used–we eventually realized that someone from another tribe must have been visiting. There was no other way to explain it.”

Village rugs, according to Winitz, are more of a “cottage industry” whose manufacture was “an event” for an entire village. The men raised and herded sheep, while the women hand-dyed the wool using all-natural dyes and wove the carpets on giant looms. Elisabeth Parker, the head of Christie’s rugs and carpets department, describes the production of these textiles as a “women’s industry.” She explains, “The men of the villages would sit around watching the sheep and smoking their pipes, while the women would be dying and weaving. The women would often sit in rows, and go down the line vertically, while a man would tell them what color to weave or not weave–like a little chant or poem.” This process could take up to five years for a team of 10 weavers, depending on the scale of the project.

Finally, court or city rugs, which were made in workshops in the great cities of Iran and the Ottoman Empire, are the antithesis of their tribal counterparts, exhibiting perfect symmetry and an extreme standardization in their weave. They were manufactured in workshops according to patterns made by professional designers, on commission to patrons or even royalty. The oldest surviving city rugs date back to the 15th or 16th-centuries, but examples that old are extremely scarce. 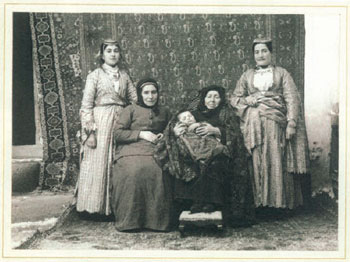 Five generations of an Armenian family. The rug behind them and the one on the floor appear to be Persian. Ottoman Turkey, 1893.

In general, whether their interest is tribal or city, collectors tend to focus on 19th-century rugs. In order for a rug to be considered “art-level,” it must have been woven before the advent of the so-called commercial period in the early 20th-century. The industrialization of the Middle Eastern textile market interfered too greatly with the manufacture and selling of oriental rugs for them to be seen any longer as purely artisanal works. The introduction of artificial chemical dyes was the death knell of the traditional rug manufacturing process. “The world of people who are serious about rugs discount the ones made after 1900, because that’s when they stopped using natural dyes,” says Poullada. These natural dyes–created from shellfish to make Tyrian purple or aubergine, or certain insects to achieve a rich red known as cochineal– age better, as well, with the dark colors often becoming richer with age, and the light colors softening. 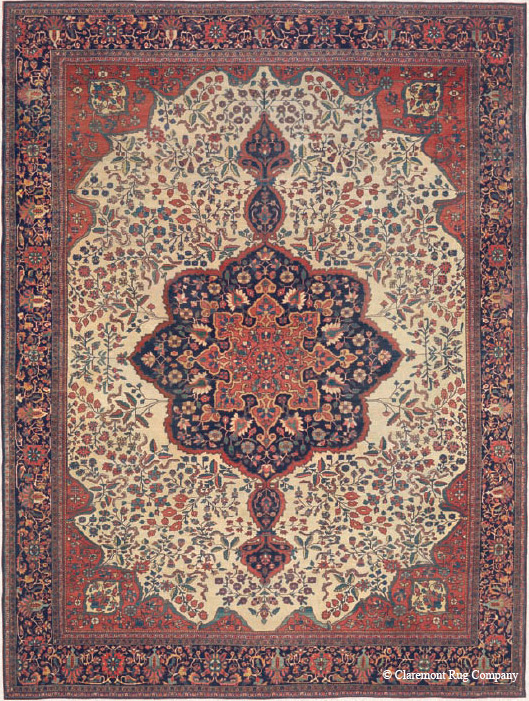 Many collectors focus on specific tribes or regions as a matter of personal taste, but certain types of carpets have maintained their popularity over the years. Rugs from the 85 distinct tribes of the Caucasus, the crossroads between the Black and Caspian seas, are prized among collectors for their variety, bold geometric patterns and bright colors. Winitz recalls a collector who embarked on a still-unfulfilled quest to acquire a rug from each of the 85 regions. “These rugs have quite a kinship with modern art–Klee and Kandinsky for example,were inspired by Caucasian rugs. People who gravitate toward Renaissance works or Old Master paintings, I find, are more attracted to the rugs of Laver Kirman.” The court or city rugs of Laver Kirman in southwest Iran are known for their languid lines, rich colors and large proportions– sometimes pushing 15 by 25 feet. 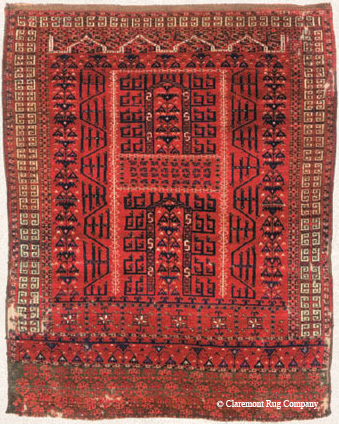 “These rugs have quite a kinship with modern art–Klee and Kandinsky for example, were inspired by Causasian rugs.”
– Jan David Winitz
President of the Claremont Rug Company 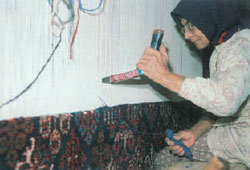 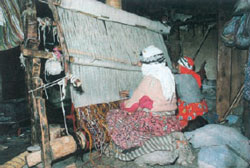 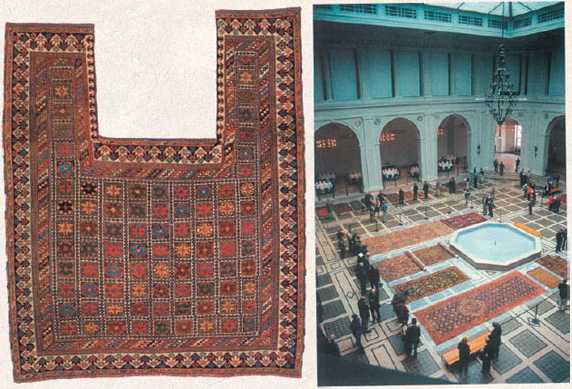 Front left: Bakshaish rug from Azerbaijan, third quarter of the 19th century; rugs from the collection of the Brooklyn Museum laid out in the museum’s grand courtyard, 2003.

It was a 17th-century Laver Kirman that set the record at Christie’s New York last spring for the top-selling rug at auction, attaining a whopping $9.6 million. Poullada acknowledges the desirability of such a piece, saying, “We’d all like to own 17th-century Persian carpets, but only a museum in Qatar could afford it!” Rahimipour notes that the age and origin of that particular rug certainly played a part in its price, and generally these court rugs command higher numbers, but it’s often hard to tell which rugs will bring in the big bucks. “Every sale blows me away,” says Rahimipour. “Sometimes I think certain carpets are ugly and they sell for a lot of money, or I think a carpet is beautiful and it doesn’t sell for what I thought it would. But that’s the beauty of auction.” Collectors are often attracted to smaller, area-size rugs (3 by 4 to 6 by 9 feet), not only because of the lower price, but also because, as Winitz explains, “they’re more fun to play with.” Small prayer rugs are also increasing in popularity. “These rugs,” says Parker, “would have been rolled out five times a day. I saw one recently that really blew me away. It was from the Caucasus region, probably around the 1890s. It had an arch pointing towards Mecca and had rows of a paisley pattern.” Other culturally significant tribal objects such as bags and trappings are becoming more coveted by collectors. Munkacsi, who along with the Hajji Baba club recently published a book, Timbuktu to Tibet, in conjunction with an exhibition of the same name, describes the tribes who manufactured these objects as “textile-saturated societies.” He adds, “The yurts they lived in were collapsible, and everything they had could be put in a bag and strapped on a donkey. You can’t move around a chest of drawers like that.” These trappings also had the ceremonial aspects, says Munkacsi: “A young woman would spend years preparing her wedding items, and during the wedding ceremony she would be transported from her home to her husband’s in a caravan. The trappings she made would decorate the sides of the camels in the caravan, and afterwards would hang in the couple’s yurt. All these bags and trappings were like wampum– they could be brought into town and traded for things a family needed.” Each oriental rug (or related item) is an ideal mix of aesthetic beauty, functionality and material culture. Krody notes, “We appreciate art for beauty but when we hear the history of a piece we learn how it has affected many lives. The dyes, the materials of rugs–a pretty red isn’t just a pretty red, it really means something.”

“Certain types of carpets have maintained their popularity over the years. Rugs from the 85 distinct tribes of the Caucasus, the crossroads between the Black and the Caspian seas, are prized among collectors for their variety, bold geometric patterns and bright colors.” 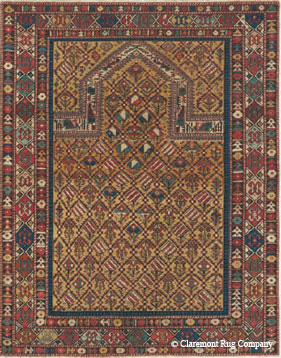 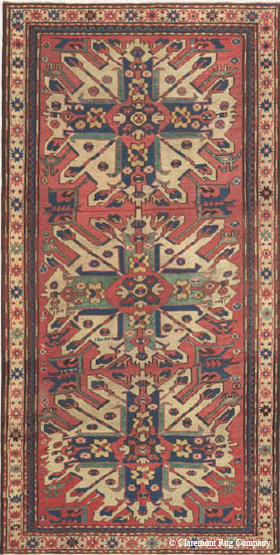