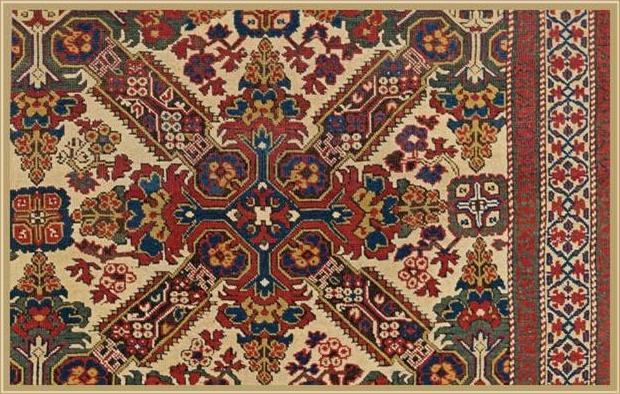 Looking at the bold geometric or floral patterns of a fine Oriental carpet has a distinct effect on me. Particularly with certain tribal rugs, the harmony between color and design and the sense of overall balance have an agelessness which seem to say “yes” to life. Recently, while sitting with a striking Persian Afshar containing the traditional boteh, or paisley leaf design, I could taste the long heritage of artistry which has supported the weaving of this rug. The designs seemed to be teeming with history!

It is clear that the art of weaving pile rugs is ancient, but just how ancient? I invite you to become a detective with me, to search among clues scattered over two millennia in an attempt to locate where and when the first carpets were woven. 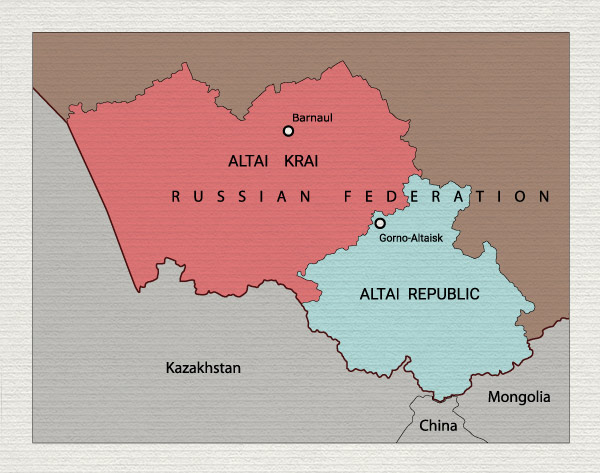 Pazyryk Valley, in present-day Altai Republic, just north of where the borders of the three countries meet.

As we begin our investigation, one major stumbling block stands in our path – woolen carpets are perishable. In fact, until recently, the oldest surviving pile carpets were those of the Seljuk Court, dating only from the 12th-13th centuries. Accordingly, early researchers into the origin of carpets worked primarily from ancient literary sources, in themselves hardly definitive. Their theories were numerous and highly controversial.

Then, in 1947 in the remote Pazyryk Valley of the Altai Mountains, southern Siberia, we find a clue which increases our knowledge of ancient weaving on hundred-fold. While excavating the burial mound of a nomadic prince of the Altai horsemen who lived in the 5th century B.C., Russian archaeologist S. J. Rudenko stumbled upon the impossible – a nearly completely preserved pile carpet frozen in ice over the last 2500 years! 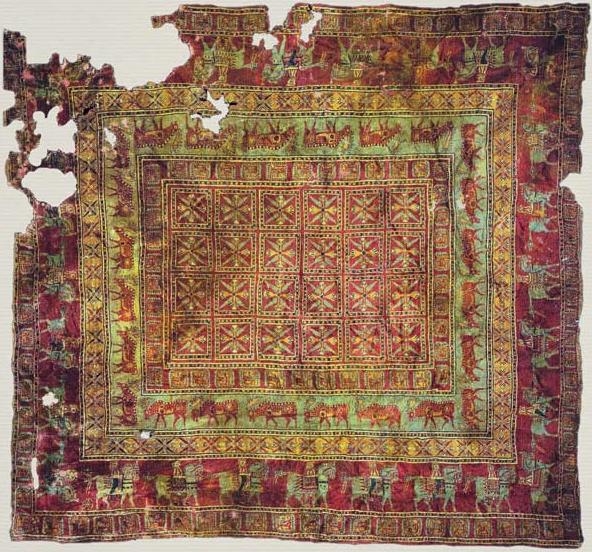 The Pazyryk Carpet, discovered in a remote mountain area of Southern Siberia in 1947, had been nearly completely preserved, frozen in ice, for over 2,500 years. 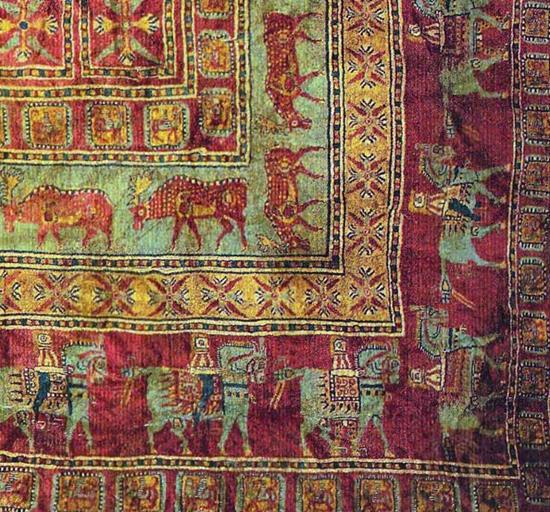 Detail of Pazyryk: two elaborate borders, one with fallow deer, the other mounted horses.

The conditions which brought us the so-called Pazyryk Carpet constitute a phenomenon of almost miraculous proportions. Shortly after it was erected, the Altai tomb was ransacked by grave-robbers. They made a hole in the wooden timbers of the roof which shortly afterwards allowed torrents of water to seep into the tomb. The water, in turn, was transformed into ice in the frozen Siberian subsoil, and along with the bodies of the chieftains and their perishable possessions of leather and fur, the carpet with held in a natural suspended animation.

The Pazyryk Carpet is hardly a crude work. It not only demonstrates beyond question that pile rugs were being made in the Orient some two and one half millennium ago, but even more spectacularly, that the art of weaving was already highly-developed at that time. For the rug’s balance of design and precision of weaving suggest that it is actually not an original carpet at all, rather the result of a long tradition of artistry. 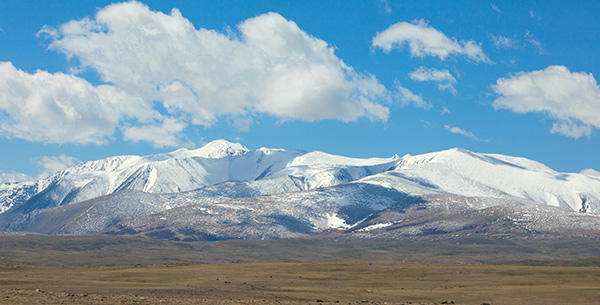 Altai Mountains were part of the Scythian nomads territory between 900 B.C. – 200 B.C.

The 2500-year-old Pazyryk carpet, a six foot by six and one-half foot treasure discovered frozen in the tomb of a Scythian chieftain, contains a dense pile of 232 knots per square inch; 1,250,000 knots in all. The borders include animal figures so technically perfect that they depict decorations on 28 horsecovers in intricate detail. The weaver not only used the identical Turkish knot as the famed 16th century Safavid Court pieces of “The Golden Age of Persian Carpets” some 20 centuries later, but many experts agree that the Pazyryk Carpet is actually superior in craftsmanship! 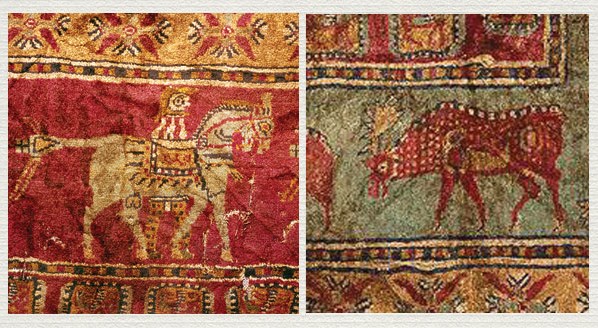 Warriors on horses, both in precise ceremonial trappings verified by stone carvings of the Neo-Assyrian Empire (911-609 B.C.), and fallow deer (the breed still exists to this day) with flattened antlers and spotted coats elaborately fill the Pazyryk Carpet’s two wide borders.

Although found among the remains of these Central Asian nomads, the rug is believed to have actually been woven in an agricultural setting over 2000 miles distant. Most likely, it stemmed from Northwestern Persia or the Caucasus, and arrived at Altai along trade routes, already firmly established at that time.

The discovery of the Pazyryk Carpet offers us an invaluable clue in our search to discover the origin of rug weaving. Yet, it also stands as an island separated by the sea of an almost 2000-year gap until our next carpet specimens far into the Safavid era. Its beauty and symmetry are enchanting, yet they also add to our perplexity about the actual origin of carpet weaving.

We are next aided in our search by the late-20th century work of Julian Reede, who presented convincing evidence that over 300 years before the Pazyryk Carpet was woven, the royal palaces of Assyria were decorated with ornately-crafted pile rugs. 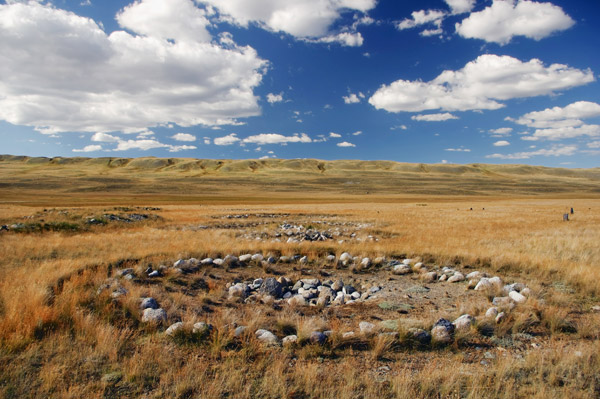 The Pazyryk Carpet was excavated on the site of ancient Scythian burial mounds of the Pazyryk culture. 5th century B.C., on the Plateau Ukok, Altai mountains, Siberia, Russia.

Excavations of the palaces at ancient Nimrud, Balawat and Nineveh show that their outer courtyards were paved in brick, while all of the remains of the inner rooms are floors of compacted mud. Stone panels were found in doorways and the dais of the throne, insignificant except for the fact that they were chiseled with intricate designs almost identical to those of the Pazyryk Carpet!

Reede has drawn the conclusion that these stone panels merely echoed the patterns of the elaborate carpets which covered the palace floors, as they existed only in doorways and other locations where carpets would have been impractical. The slabs also give us an indication as to the near agelessness of carpet designs, as into them are chiseled the palmette pattern, formerly thought to have been created in the 16th century. 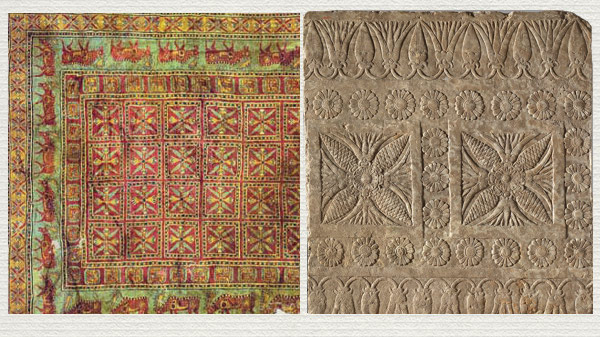 As is the Pazyryk rug, Dr. Reede’s seemingly conclusive evidence is astonishing, yet it can only whet our appetite as carpet detectives. For if technically sophisticated pile rugs were being woven as early as 800 B.C., how far back beyond that does the origin of carpets extend? 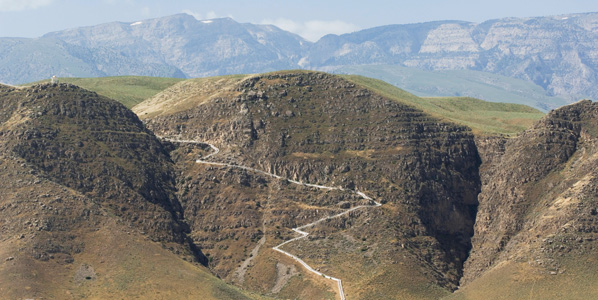 Above: Foothills of the Kopet Dag Range of Southern Turkmenistan where Bronze Age weaving tools were found. Below: Map showing the Sumbar Valley where the Parkhai II excavation was centered. 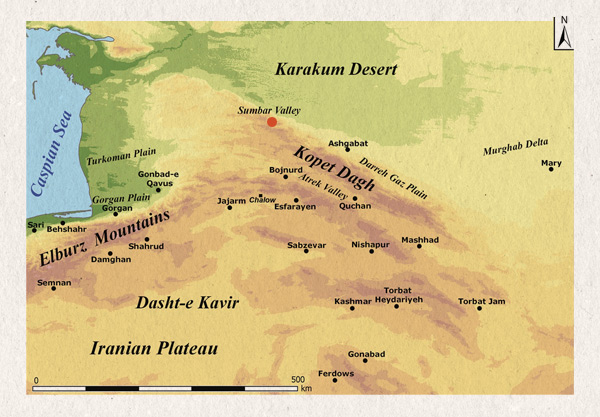 Luckily, we are offered one final link to date in our mystery. This stems from the 1978 Soviet excavation of Parkhai II, an Early Bronze Age cemetery located in the Sumbar River Valley in Southern Turkmenistan near the modern town of Kara Kala. Here were uncovered burial grounds dated to approximately 2500 B.C.

Of greatest interest for our research into the origin of carpet-making are the graves of the women, the majority of which contained stone spinning wheels. This strongly indicates that most women spun yarn. Numerous metal blades were also discovered in the women’s graves, almost exact duplicates of the iron-bladed knives used by modern Turkmen tribespeople to cut the pile of their carpets. Scissors and needles, most likely also used in carpet-making, were also unearthed.

Left: The Parkhai II excavation in process. Right: Panoramic view of the area with superbly intact samples of the grey pottery of this Bronze Age culture.

All of the tools discovered at Parkhai II show a level of sophistication which demonstrates that they were hardly new inventions. In fact, the Soviet archaeologists cautiously estimated that the origin of pile rug weaving stems to centuries prior to these artifacts – to two thousand years before the Pazyryk Carpet was created. 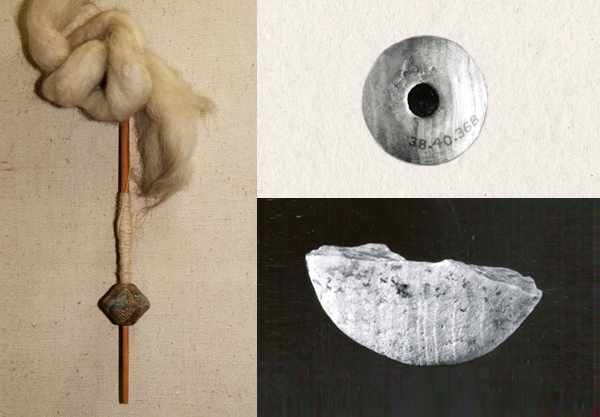 Can we delve back further into the past and find more answers? We know sheep husbandry began developing long-haired breeds by the 5th millennium B.C., which over time changed the economic and agricultural fabric of many of these early cultures as the benefits of woven woolen items were discovered. In “Prehistoric Textiles”, archeologist E.J.W. Barber’s writes “not until the fourth or third millennium B.C. does evidence begin to appear for managed flocks of sheep suitable for wool production of the type that could be used for dyeing and thus making polychromatic weavings” such as flatwoven rugs and later pile rugs.

Here our trail goes dark. From the Pazyryk Carpet, circa 500 B.C., we found pavement decorations inspired by knotted rugs in Assyrian palaces, circa 800 B.C. The tombs at the Parkhai dig, circa 2500 B.C., indicate pile weaving from what we believe to be its nascent stage with the findings of many yarn cutting knives and scissors. What their floor coverings looked like and the journey from those to the exquisite Pazyryk Carpet is veiled from our view.

So, our search for the origin of the woven pile carpet ends at an unknown location somewhere in between the third and fifth millennia B.C. We can only imagine what additional clues lie buried under the desert sands of the Middle East and Asia.

Yet, if our minds cannot definitively know when and where the weaving of Oriental carpets originated, our feelings can gain a sharp sense of the quality of the ancient people who created them. For ancient man realized that by tying knots out of wool, he could form designs that expressed his desire to understand the natural forces governing his life and the universe. In doing so, he touched on a wisdom which is timeless.

Many of these harmonious designs first created thousands of years ago have survived virtually unaltered. We have the great privilege of being able to see and appreciate them in fine 19th century examples of the tribal art of Oriental rug weaving.