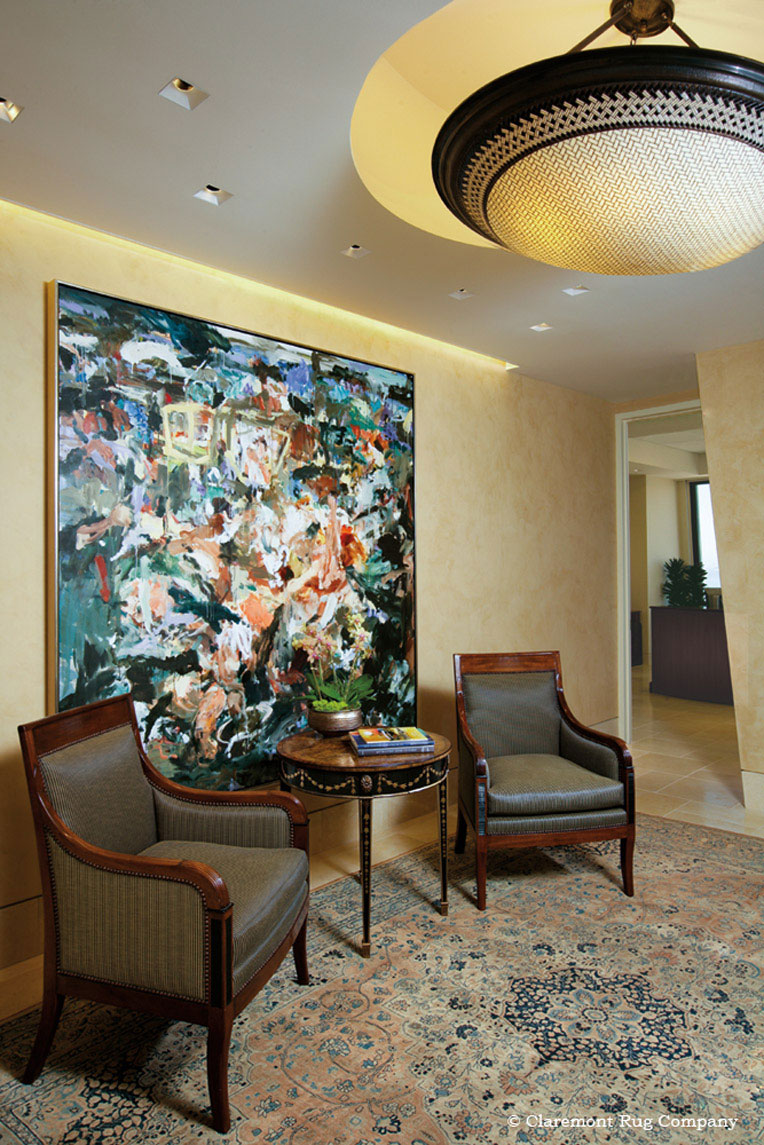 Of the four main categories of antique Persian rugs, city rugs are the most refined. These graceful antique rugs were woven in the workshops of master rug designers. The exquisite curvilinear and botanical designs of these antique carpets were rendered with impeccable clarity, due to their fine weave, closely cut pile and the exceptional attention to detail. Each of the major city styles has unique design elements and its own individual “weave” (inner structure of the rug) including: Tabriz (notably from the Hadji Jallili (Haji Jalili) workshop), Laver Kirman (notably from Tausenchian, Khasati and Delmaghani workshops), Kashan (notably early carpets known as Mohtashams as well as the lamb’s wool “Manchester” style and from the Dabir workshops), and Meshed (or Mashhad) notably from the Omoghli and Saber workshops. In India, Persian artisans were imported to weave in the workshops of the cities of Agra and Amritsar.

While each city in which these treasured carpets were produced possesses its own distinct pattern language and colors, one aspect of design is common to all antique city rugs: the use of symmetry. Unlike rugs produced in town, village and tribal settings, in creating a floral rug a master rug designer would first create a “cartoon”, a knot-by-knot plan that were to be followed exactly by the artisans who wove at the loom. 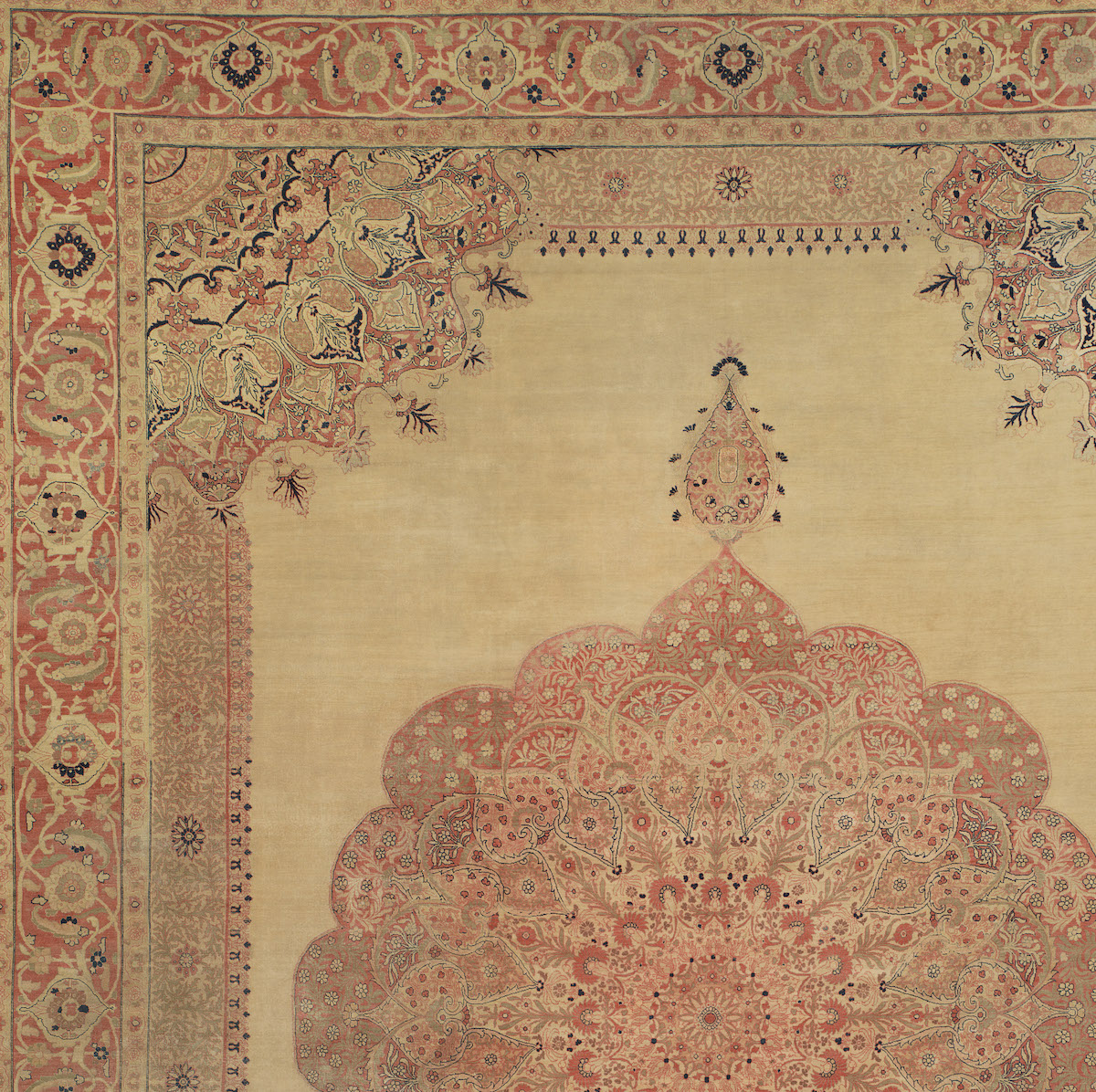 Tabriz rug weavers from the renowned Hadji Jallili’s (Haji Jalili) workshop “produced inspired versions predominantly of the revered medallion-and-corner-piece design, while other patterns such as multi-medallion and Garden of Paradise were also created. These carpets are recognizable for distinctive palette of brick, clay, taupe, soft greens and cream tones that eschewed the Persian use of soft to deep reds and blues. In the late 19th century and beginning of the 20th century, other Tabriz workshop were influenced by the Hadji Jallili color palette and patterns to create less ornate, more loosely knotted pieces known as “Rugs in the Style of Hadji Jallili.” Throughout the 1800s and 1900s, other Tabriz workshops created very finely crafted carpets of great beauty in the traditional palette of reds and blues or a panoply of hues. To view a selection of antique Tabriz rugs from the Hadji Jallili (Haji Jalili) workshop in the gallery, click here. To view a cross-section of all antique Tabriz rugs, click here. 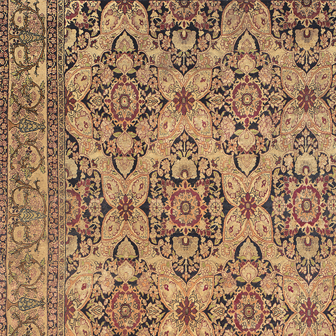 The city of Kirman (also spelled Kerman) was a major producer of floral rugs in the 19th century, with Laver (Ravar) Kirman rugs particularly renowned. Laver Kirman designs were marked by exquisitely rendered, small-scale, intricate patterns and a color palette of gold and yellows contrasted by small areas of deep indigo hues as well as a range of soft pinks, rose reds, blues, and greens. You will also find one of the rarest and most prized dyes, cochineal, which yielded the rich Renaissance blue-reds found in these stunning antique rugs. Notably, this district produced rugs in all sizes up to palace sizes that took many years to weave. The “best-of-the-best” Laver Kirman rugs are especially sought out by collectors and interior designers alike. To see more of these extraordinary antique Laver Kirman rugs in the gallery, click here. 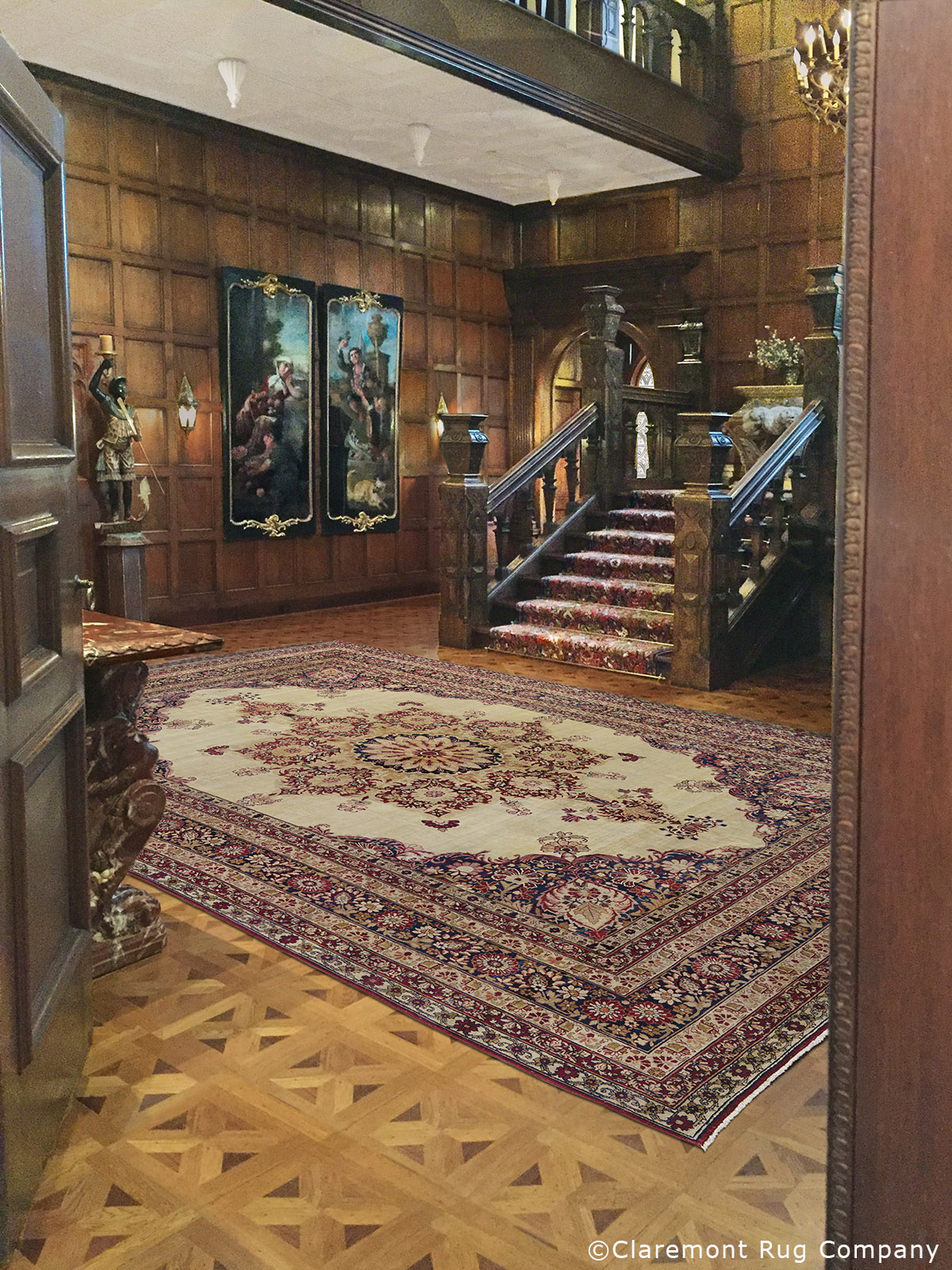 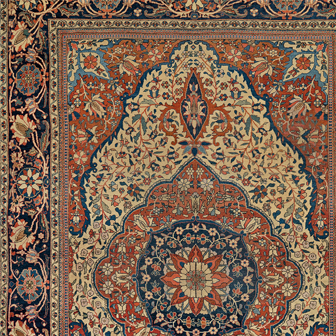 The city of Kashan
boasts an illustrious weaving history dating back to the 16th century, and is the birthplace of many archetypal antique carpet designs. Of all the floral rugs produced in the 19th century, those from the Mohtasham Kashan tradition are the most prized. In the 19th century and early 20th century, the designers and weavers of Kashan had the most inventive, profound aesthetic that, coupled with an extremely fine weave, produced rugs of great depth and beauty. These sublime pieces used the highest quality lamb’s wool, giving them a reflective quality, which makes their colors shimmer. Ivory and gold backgrounds were most often used to set off this style’s remarkable panoply of medallion or overall patterns. To view a diverse gallery of beautiful antique rugs from the city of Kashan, click here. 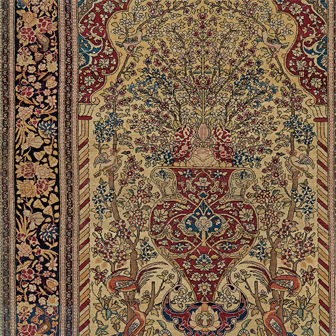 Isfahan rugs trace a direct lineage to the most illustrious and important weaving tradition of the 16th and 17th century Safavid era, widely seen as the original Golden Age of Persian weaving. Technical excellence that included the use of the arabesque pattern and elegant botanical designs are the hallmarks of this quintessential Court carpet style. Both area size and larger room size dimensions were woven, often commissioned by elite patrons. In carpets woven from the mid-19th century to circa 1920, the classical Isfahan design attributes of formal symmetrical drawing, delicate vinery and intricate central medallions predominate. To browse a selection of exquisite antique Isfahan carpets in the gallery, click here. 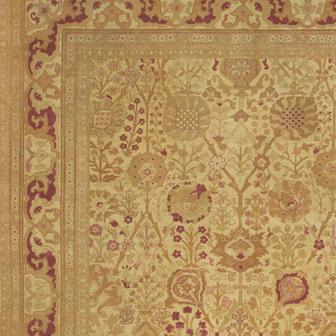 In India two weavers centers created carpets that were firmly in the Persian tradition, often made by imported Persian weavers. These are Amritsar and Agra, the home of the Taj Mahal. Weaving in Amritsar was heavily influenced by Persian weaving, dating back to the 16th century. Master craftsmen in Amritsar were experts in creating the vegetable dyes which give Amritsar antique rugs their unique ethereal palette of golds, gentle rusts, pinks, mid-tone blues, and a compelling unique lavender hue. The designs of these rugs are marked by a distinct whimsy and often feature small animal motifs within elegant spiraling vines. To browse a selection of exquisite antique Amritsar and Agra carpets in the gallery, click here. 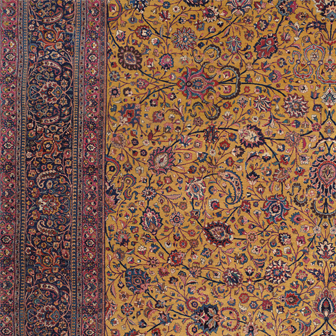 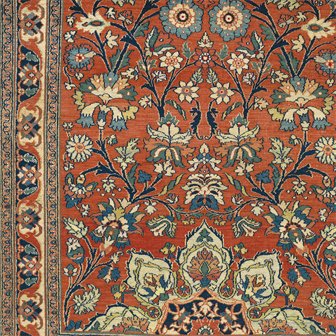 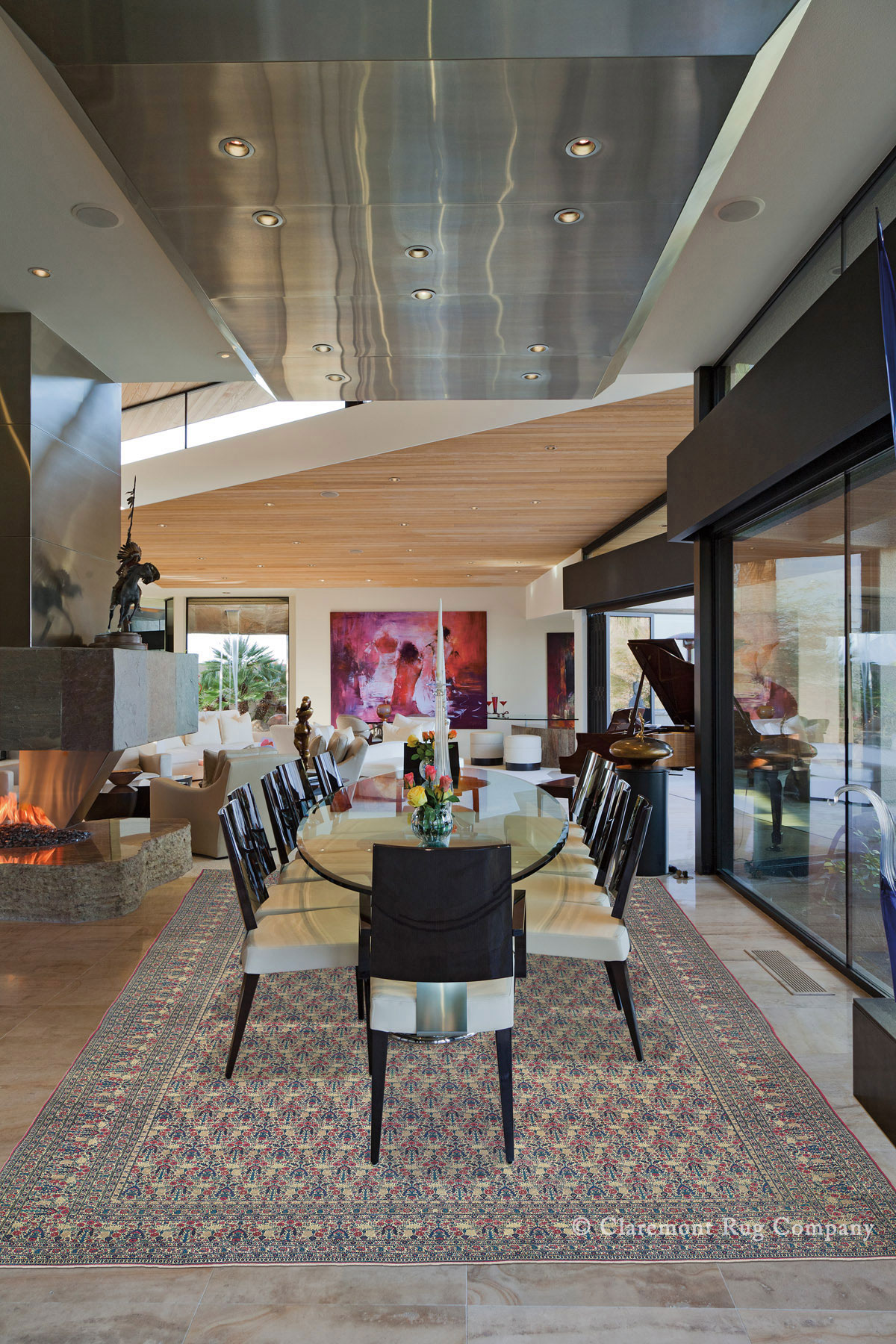 In the legacy of the East Persian Court tradition that influenced weaving throughout the Khorossan district, 19th century Dorasht carpets are known for their refined weaves and deeply creative botanical inspired patterns. Prior to the last quarter of the 19th century, their intricate overall herati and floral designs most often used distinctive rose and ruby red tones in their color palette. Later pieces sometimes offer rust and persimmon tones. While much of Dorasht production created supple, finely woven, allover patterns, the best pieces offer astonishing floral themed artistry. One of the least produced antique City carpet styles, Dorasht carpets are encountered only occasionally, most typically in area size dimensions. To view a selection of antique Dorasht rugs in the gallery, click here. 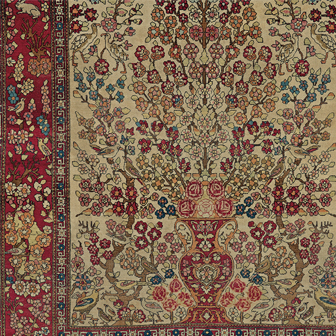 On par with the finest of the other Court weaving styles, 19th century Tehran carpets are very highly prized by connoisseurs for their detailed renderings of fanciful gardens and dazzling allover repeated patterns. Strikingly realistic, pictorial drawing is a hallmark of this style, with an abundance of animals, birds and effusive botanical forms rendered from a direct observation of nature. Exceedingly subtle, nuanced color palettes are often employed to support these designs, entirely eschewing harsh color combinations. Tehran carpets are among the most seldom produced of antique styles and are incredibly scarce. In 19th century pieces, area sizes predominate. To browse a selection of exquisite antique Tehran carpets in the gallery, click here.