“Remember to look up at the stars,” wrote Stephen Hawking. “Try to make sense of what you see and wonder about what makes the universe exist.” Such contemplation of the cosmos, notes Jan David Winitz, founder and president of internationally respected Claremont Rug Company, was a nightly occurrence for 19th century tribespeople in the remote Caucasus Mountains who, though they knew nothing of telescopes or cosmologists, would have understood perfectly. 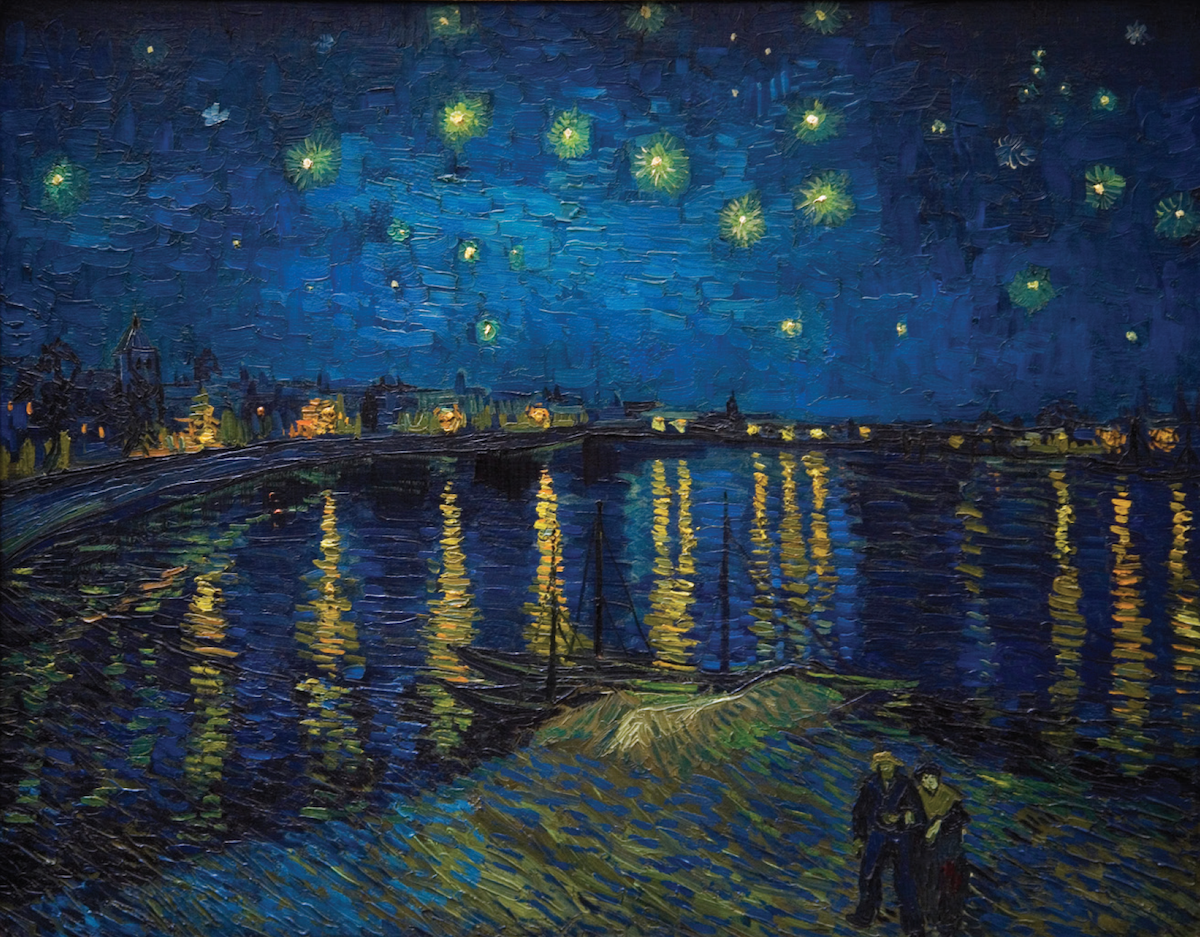 “A Starry Night Over The Rhone” by Vincent van Gogh (1888). The most renowned of his night paintings expresses Western art’s capturing of man’s enthrallment with the star-filled sky.

“The tribespeople had a completely organic world view, one not filtered through science or formal education. They studied the forces of nature firsthand, in great part because their survival depended on it. Throughout, they maintained a sense of wonder.”

The mountainous landscape the rugs were woven in provided front-row seating to the constellations. The tallest in this range is the extinct volcano, Mount Elbruz at 18,510 feet, with no less than ten peaks rising to greater heights than Mont Blanc (15,781 ft.), the highest in Europe. The Caucasus also guaranteed ample isolation for contemplating the heavenly mysteries. Nearly each of its deep and somber valleys were, and still are, inhabited by peoples whose customs and history are entirely different from those in the next valley. Today, over 100 languages are still spoken there. 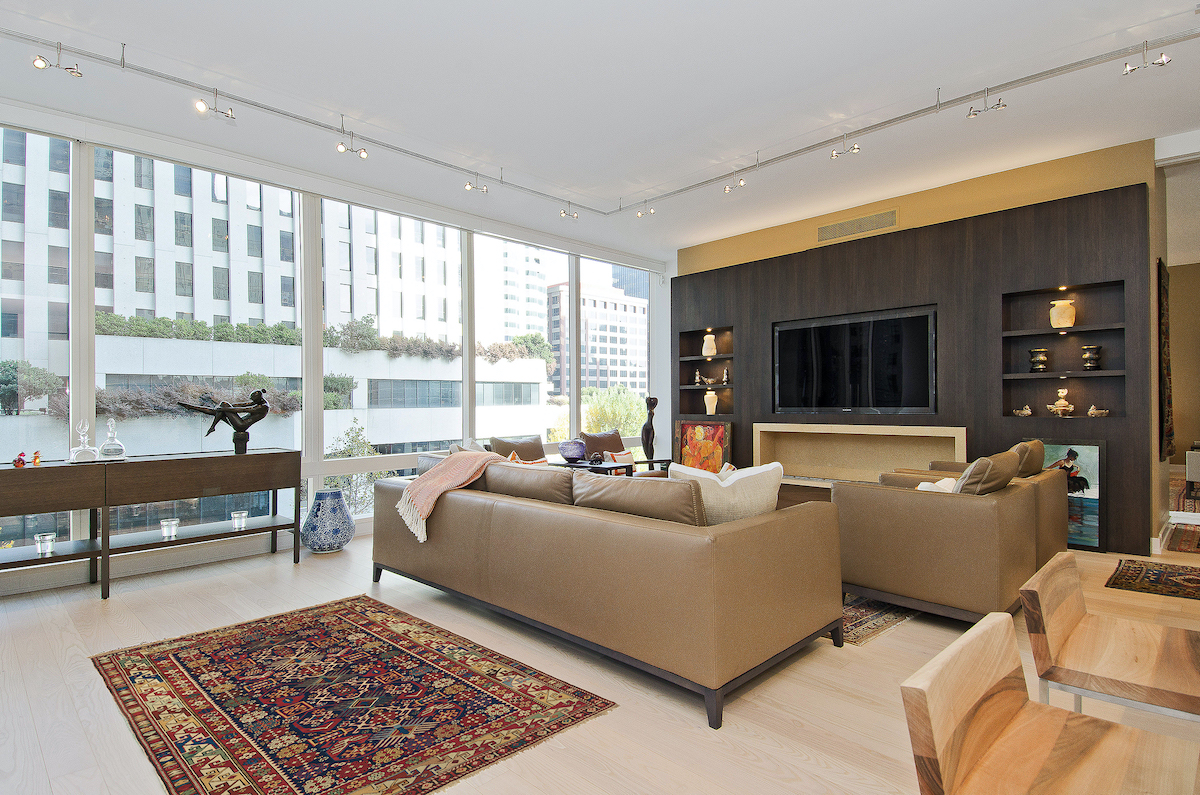 In this modern urban condo, an art collector uses the open floor plan to place sterling 19th century Caucasian pieces from his rug holdings. Note floor and wall rugs at the far right of photo. In the foreground is a superb 3rd quarter, 19th century Bidjov Shirvan rug, with its evocative regional field pattern and linked dragon motifs in the border.

“At the time their great rugs were produced, virtually all of the tribespeople lacked literacy, but they excelled at pictorial, non-linear thinking, fed in part by nightly story-telling that embodied their collective wisdom, and by a vast body of symbolic patterns that had been handed down, from generation to generation, for millennia.” A nearly intact 2,500-year-old rug known as “The Pazyryk Carpet”, discovered in 1949 frozen in a Scythian tomb, testifies to the advanced knowledge of carpet-weaving in the early Iron Age, that used symmetrical “Ghiordes Knots” and patterns similar to those in 19th century Caucasian rugs.

Caucasian rugs embody a sweeping arc of human perception that Winitz believes connects the disparate tribal Near Eastern and urban-based Western worlds. “I am astonished at the allure of these rugs,” he notes. “My clients who collect Caucasian rugs reside on six continents. These rugs are treasure maps left to us by artisans who lived in harmony with, and whose art was informed by, the natural world.” 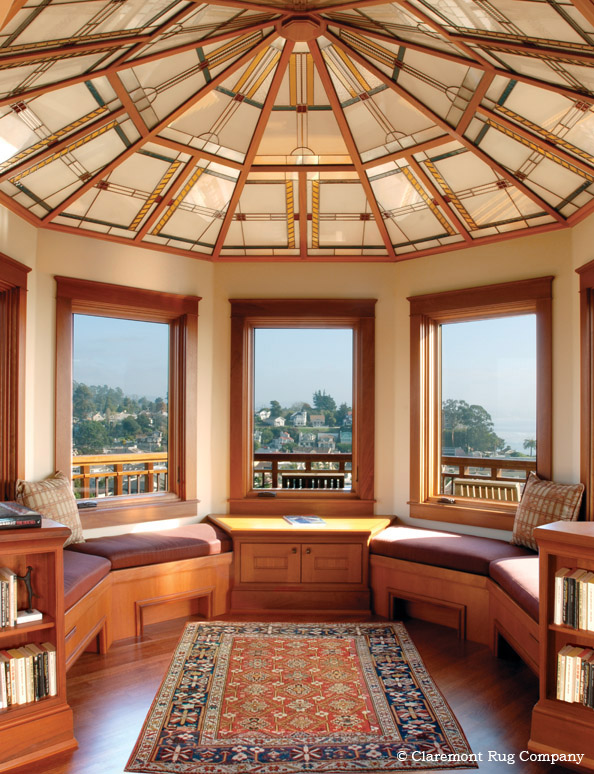 The pairing of this 150-year-old Shirvan rug with its blossom latticework design and the spectacular viewing from the turret of this custom Craftsman home speaks to the allure of living with fine examples of Caucasian rugs strategically placed in architecturally memorable spots throughout the home.

How is this possible that these carpets—created by weavers living in the folds of what were, at that time, virtually inaccessible mountains—have found an ever-growing audience in our technologically complex, ever on-the-move, 21st century lives?

Imagine living in a remote mountain village occupied by your ancestors since the dawn of history and witnessing, as they did before you, the spectacular blanket of the Milky Way, undimmed by electricity, stretching as far and wide as the eye can see. Imagine exploring, and paying honor to, your connection to such unknowable cosmic forces through hand-knotted rugs, the only “written” language you have.

Not surprisingly, the Star symbol is possibly the most utilized design in the Caucasian panoply. One recent arrival to Claremont’s collection, a 140-year-old Gendje rug, is studded with dozens of them, set against a rich, deep, shifting blue field—bringing to mind “Starry Night Over the Rhone.

Caucasian rug symbols include Ram’s Horns (a motif dating back to the region’s Bronze Age metalwork, their inward-turning curves speak to strength and fertility, as well as introspection), the Wheel of Life (an ancient mandala representing the cyclical nature of the cosmos) and Botehs (a seed-like form representing the ever-present potential for growth), among others. Zigzag border patterns are “running water”, without which life cannot exist. 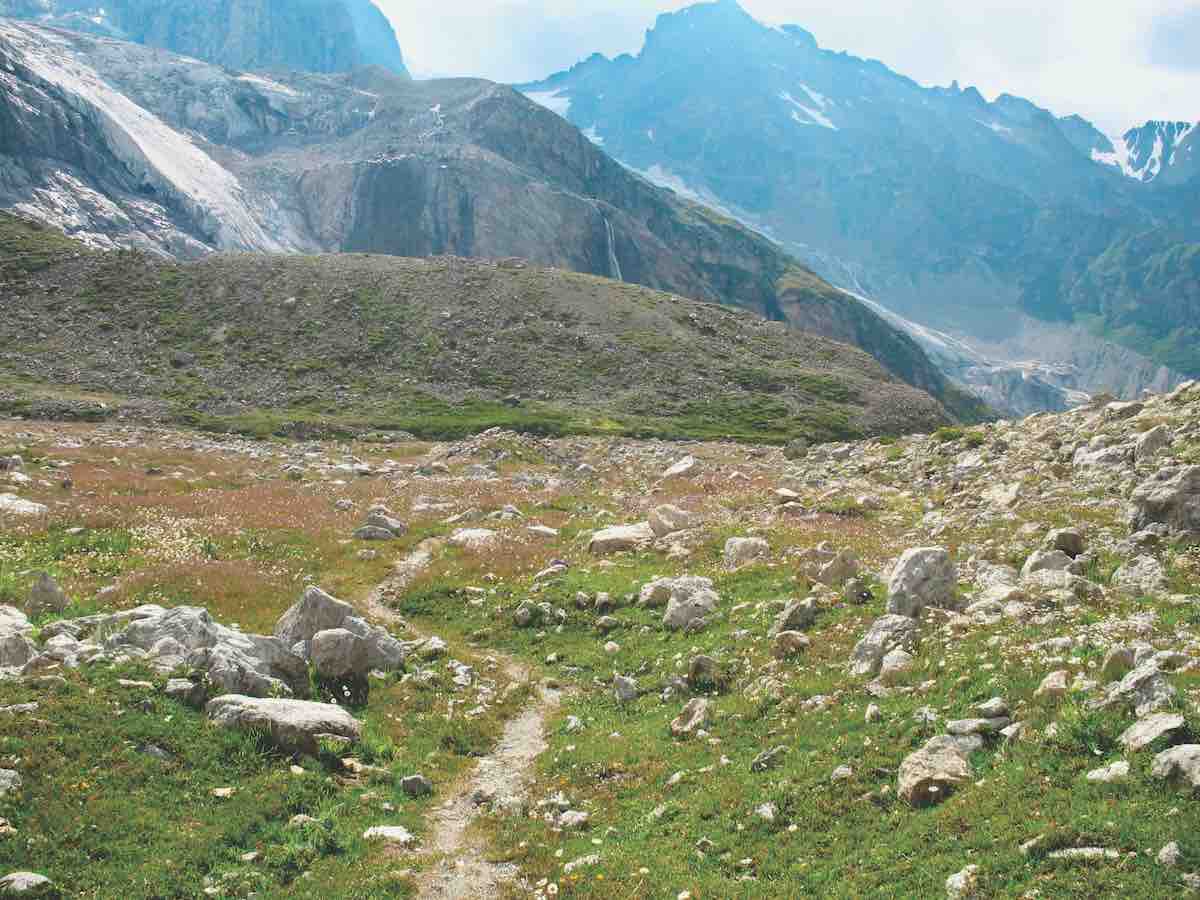 The formidable Caucasian mountains birthed a unique artistic outpouring of weavers living in its folds, whose rugs captured an extraordinary spectrum of age-old symbols and a sense of cosmic harmony.

Winitz has had the unique privilege of speaking, at length, with descendants of weavers and tribal elders over a three-decade period. “Most of my interpretations of these symbols came through these conversations,” and he adds, “and to my knowledge are not reflected elsewhere in any published research.”

It’s particularly noteworthy that the weavers recognized their age-old symbols and pattern language—keystones in their unique cultural heritage—as guidelines rather than absolutes, that spontaneity was to be relished rather than frowned upon, and that as inspiration dawned on them, they were free to improvise at their looms.

They also understood the power of placement, of strategic asymmetry and ‘unity in multiplicity’— meaning that each motif is unique, yet connected.
“Drawings on cave walls indicate these symbols pre-date organized religion,” Winitz explains. “The layers of imposed meaning compose a powerful, universal, non-verbal language. After studying a particularly enigmatic Caucasian rug, one of my clients, a neuro-surgeon, said, “This is the result of a healthy mind, free of all the modern neuroses.” 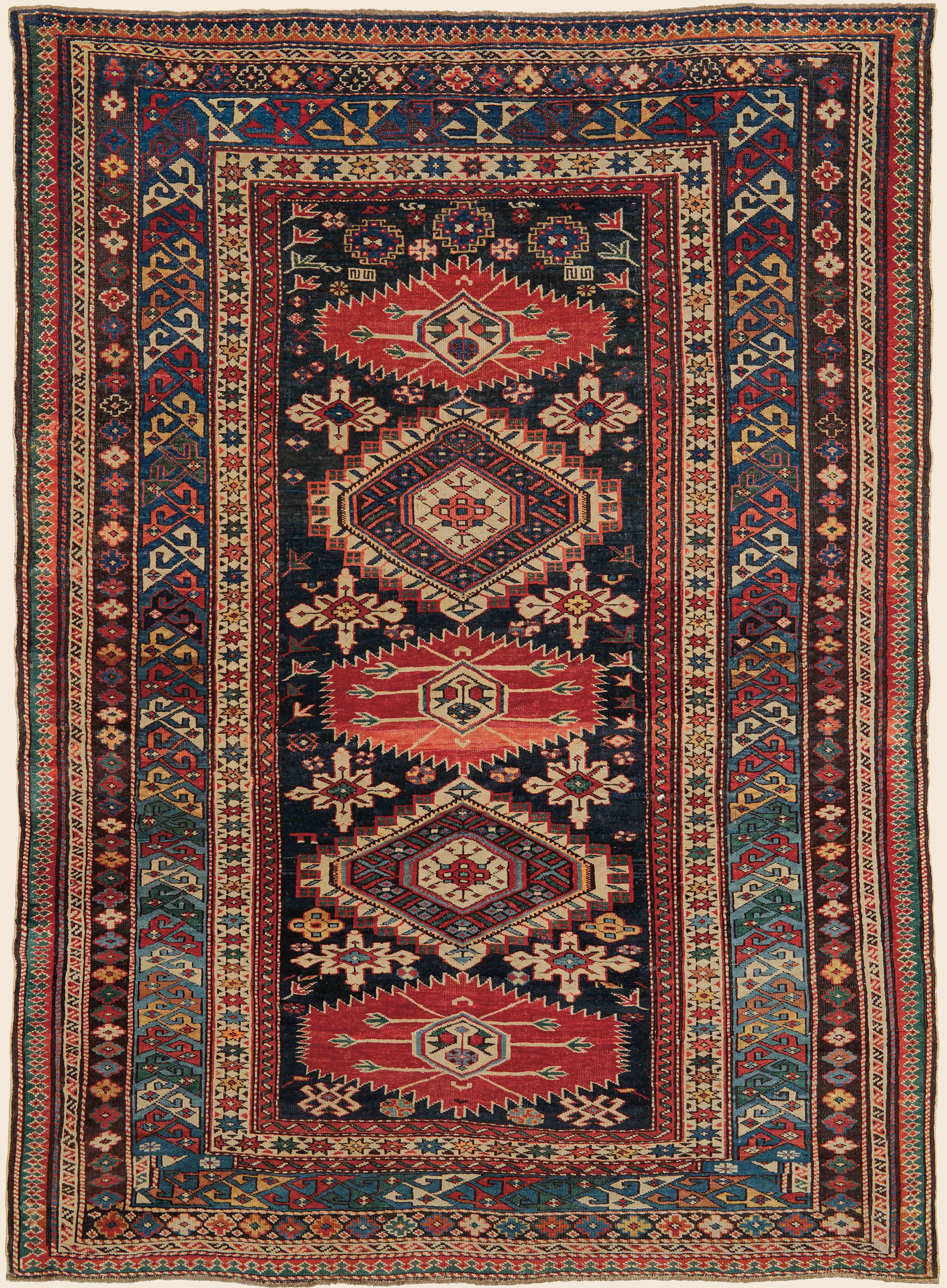 This Caucasian Gubpa Shirvan rug, circa 1875, masterfully combines in the field both stepped and serrated-edged medallions that radiate and float amid ivory star forms, all framed by a repeating abstracted dragon border pattern, symbolizing cosmic influence on the earth.

That we initially don’t know that the eight-pointed stars represent man’s potential for acquiring inner wisdom or that certain animal figures are gazelles, alluding to living life with grace and fluidity, doesn’t take away from a rug’s ability to captivate and intrigue. The closer we look, the more we wish to absorb ourselves in them.

Caucasian rugs also embody an innate recognition of the impact of color. Their weavers knew which hues worked harmoniously together and how they could be “pushed” to resonate with each other, something the French Impressionist painters discovered later at work on their canvases and 1970’s scientists encountered in their labs.

Experience taught the weavers that outlining sections with grey, blue or red amplified dimensionality and that, given the eye’s propensity to blend colors, the “right” adjacent colors created the illusion of a greater range of hues than were actually there. All of which amplified the visual and emotional impact of their designs. Not coincidentally, in the 1930s, the Bauhaus movement cited Oriental rugs as being central to their color interaction theory. 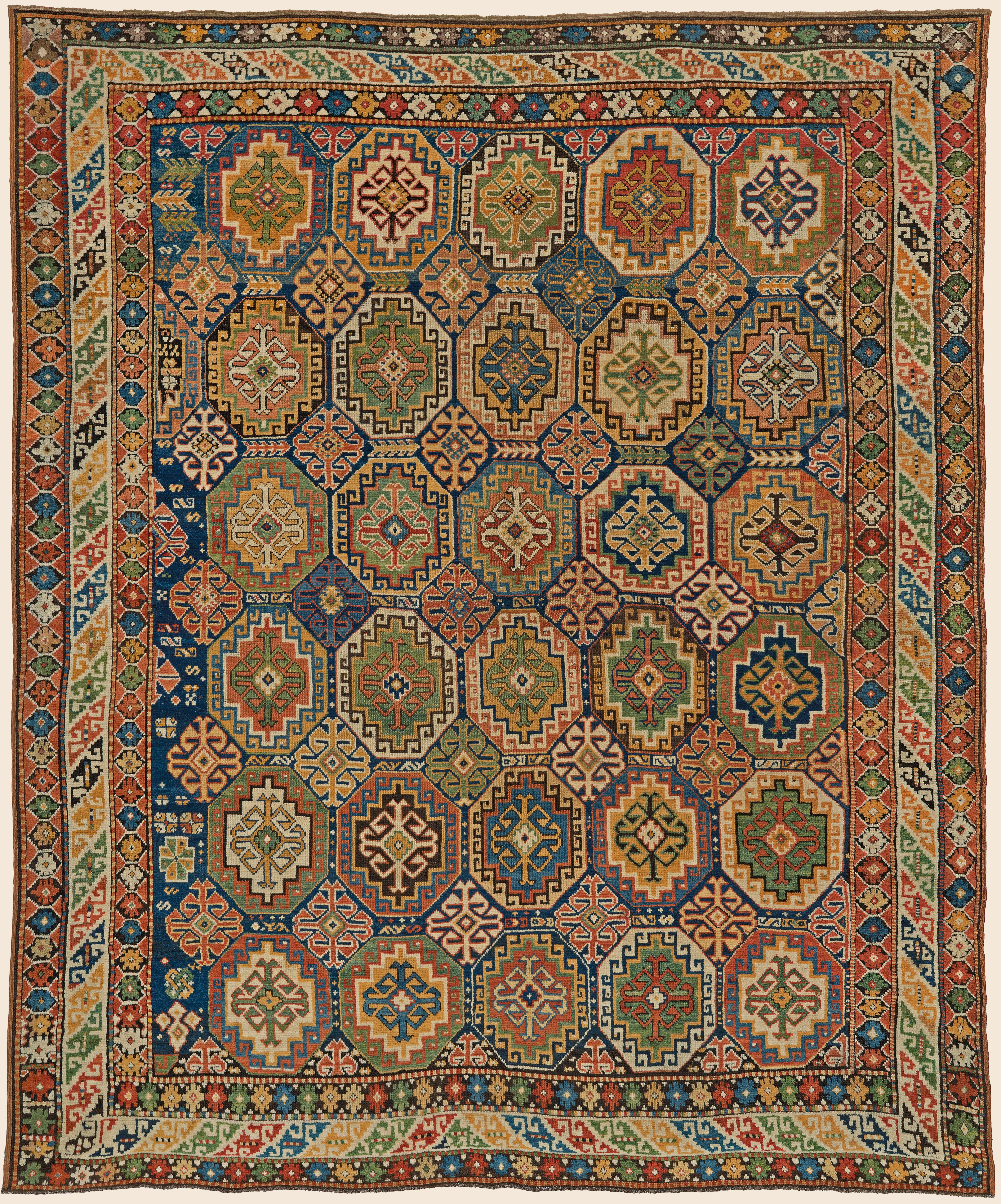 A major weaving because of its large dimensions and one-in-the-world design, this stunning Caucasian Daghestan, circa 1850, is reminiscent of hexagonal tile flooring. It vividly presents the Caucasian weavers’ great dexterity in combining magnificent displays of vegetable dyed colors in a seemingly random fashion. Note the hooked “Wheel of Life” design in each tile.

This is particularly extraordinary when you consider that, unlike Van Gogh, the Impressionists or Bauhaus artisans, who had access to the finest available paints and comfortable studios, the Caucasian weavers, often working on portable ground looms in a mountain meadow, relied exclusively on natural dyes they created from the plants in their immediate environment.

Like all artforms, a limited number of 19th-century Caucasian rugs are spell-binding; while others are highly enjoyable. To live with a rug obviously woven by a maestro is to continually discover new things—shifting motifs, playful variations on themes. A seeming “randomness” that’s far from random. An inexactitude that remains grounded by hidden natural laws of balance and harmony. An asymmetry that’s vitalizing rather than unsettling. Simultaneously diverse and whimsical, subtle and bold, they surprise and reward us, over time, for our attention.And here’s the key to their 21st century appeal: that their fascinating richness of pattern and color draws our attention, compelling us to slow down. 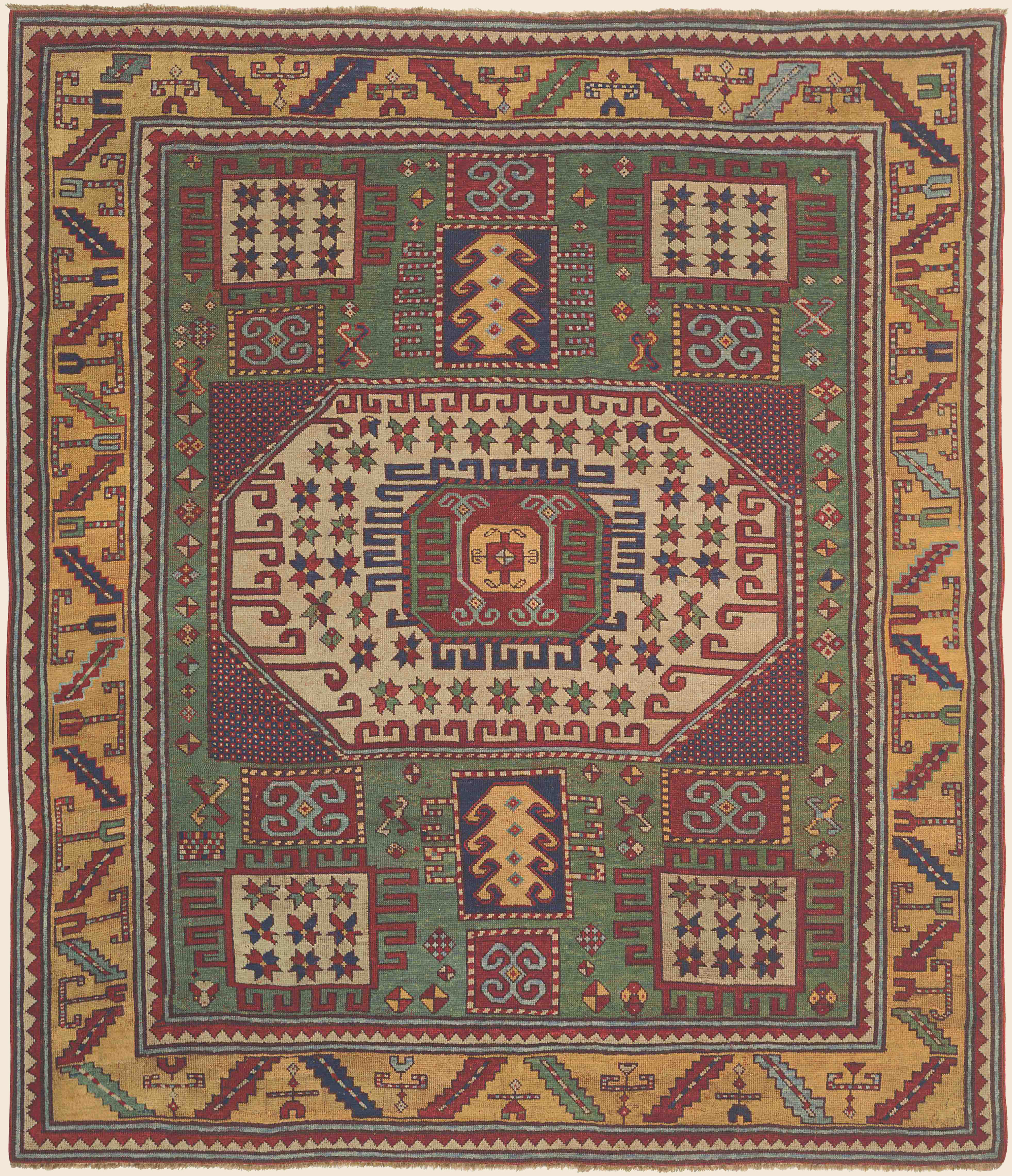 Woven in the highest reaches of the Caucasus Mountains, this Karachov Kazak rug features stars in its medallions and boxes in the corners of its rare green field, as well as numerous other naïvely drawn motifs that create an extraordinarily energetic effect, inspired by the powerful natural forces of their surroundings.

“The rugs show us that a sense of wonder is as valuable as ‘knowing.’ They reflect a life experience we have no access to,“ Winitz observes, “something we get a glimpse of when we spend extended time in nature. They invite contemplation and, in so doing, encourage us to do things fully. They nurture us both intellectually and emotionally.” Such magnetism was diluted, and eventually lost, as weaving morphed from a profound tribal art form to the “programmed” factory workshops of the early 20th century and beyond. Simply put, the ancient Caucasian weavers believed that process was as important as product, that each step—from raising the sheep, spinning the yarn and creating the dyes, to finally weaving the rug should be done to completion. Quality was never compromised for quantity, a value system increasingly absent today. 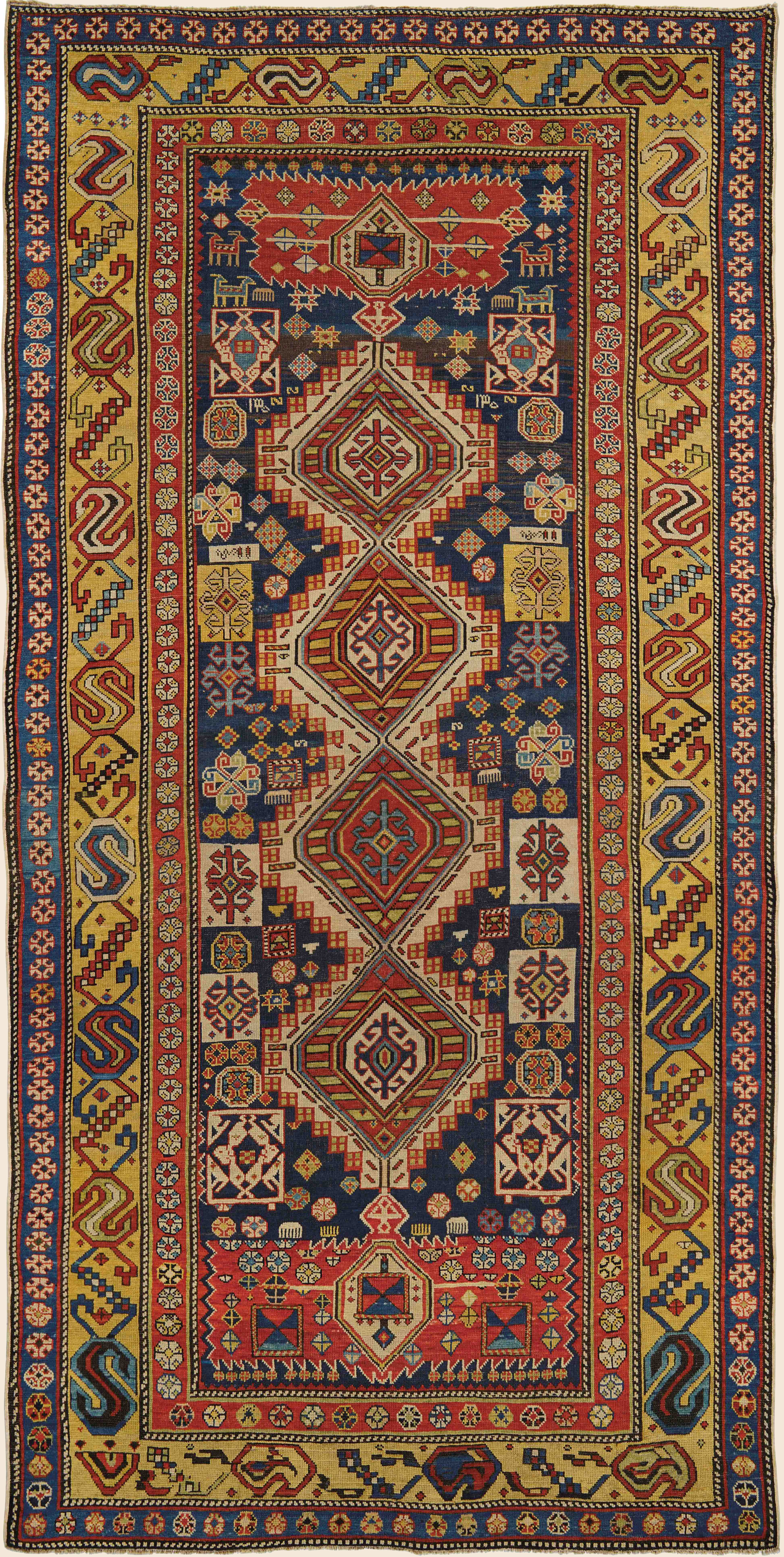 A 160-year-old masterpiece from the Caucasian Karaghasli Shirvan tradition offers a riveting central axis of stepped medallions surrounded by a panoply of ancient symbols. The striking saffron-dyed border of this High-Collectible piece hosts a stranded of connected “S” design, another ancient motif associated with fire and energy.

This is something above and beyond the rugs’ considerable decorative appeal and their value as collectibles and rare tangible assets. “By encouraging contemplation and reflecting the harmony that is omnipresent in nature, these folkloric weavings provide negative ions,” Winitz believes, those elusive, electrically charged, mood-elevating, anti-depressant molecules most likely to be found in proximity to waterfalls, thunderstorms, and exuberant plant life. No small thing, when you consider that the World Health Organization cites depression as a major contributor to disease, both physical and mental, across the globe.

“Over a half-century ago when I first met impassioned collectors, the engagement with Caucasian rugs was already strong, and their following continues to grow today,” Winitz stresses “and as long as premier examples can be found, they will continue to speak to some of our deepest emotions and our sense of wonder.”

The best of 19th century Caucasian weavings are a phenomenon that will not come again, as the circumstances that allowed them to come into being have been lost to history, technology and “progress.” That said, they are a gift passed down to a future the weavers themselves would not have been able to recognize, or imagine, but a gift immensely valuable nonetheless.