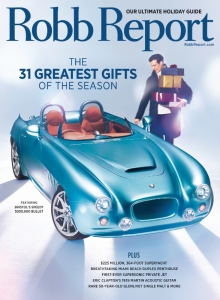 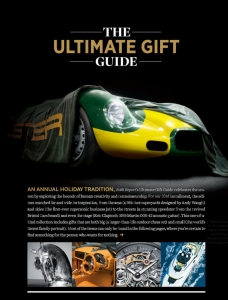 Coveted for their intricate floral designs, Laver Kirman Persian rugs are some of the most sought-after carpets by collectors and design lovers alike. For the holidays, the Claremont Rug Company is making this rare mid-19th-century example available as part of a gift package ($800,000) exclusively for a Robb Report reader. The carpet was part of a 175-piece collection assembled over five generations by a family of art collectors, and likely took a team of 10 artisans 5 years to weave by hand. The art-level design was made using natural dyes, which, along with the rug’s colossal spread (it is larger than 15 feet by 25 feet), will ensure that it retains its value as a collector’s item for years to come.

In addition to the carpet, Claremont will provide first-class round-trip airfare for the recipient and a guest (or will pay landing fees if they prefer to travel via private aircraft) to the company’s gallery in Oakland, Calif. There they will meet with the company’s founder and president, Jan David Winitz, before dining at Chez Panisse or a restaurant of the recipient’s choosing and retiring to a suite for 2 nights at a five-star hotel in San Francisco. After consulting with the recipient, Winitz will personally oversee the installation of the rug in his or her home. 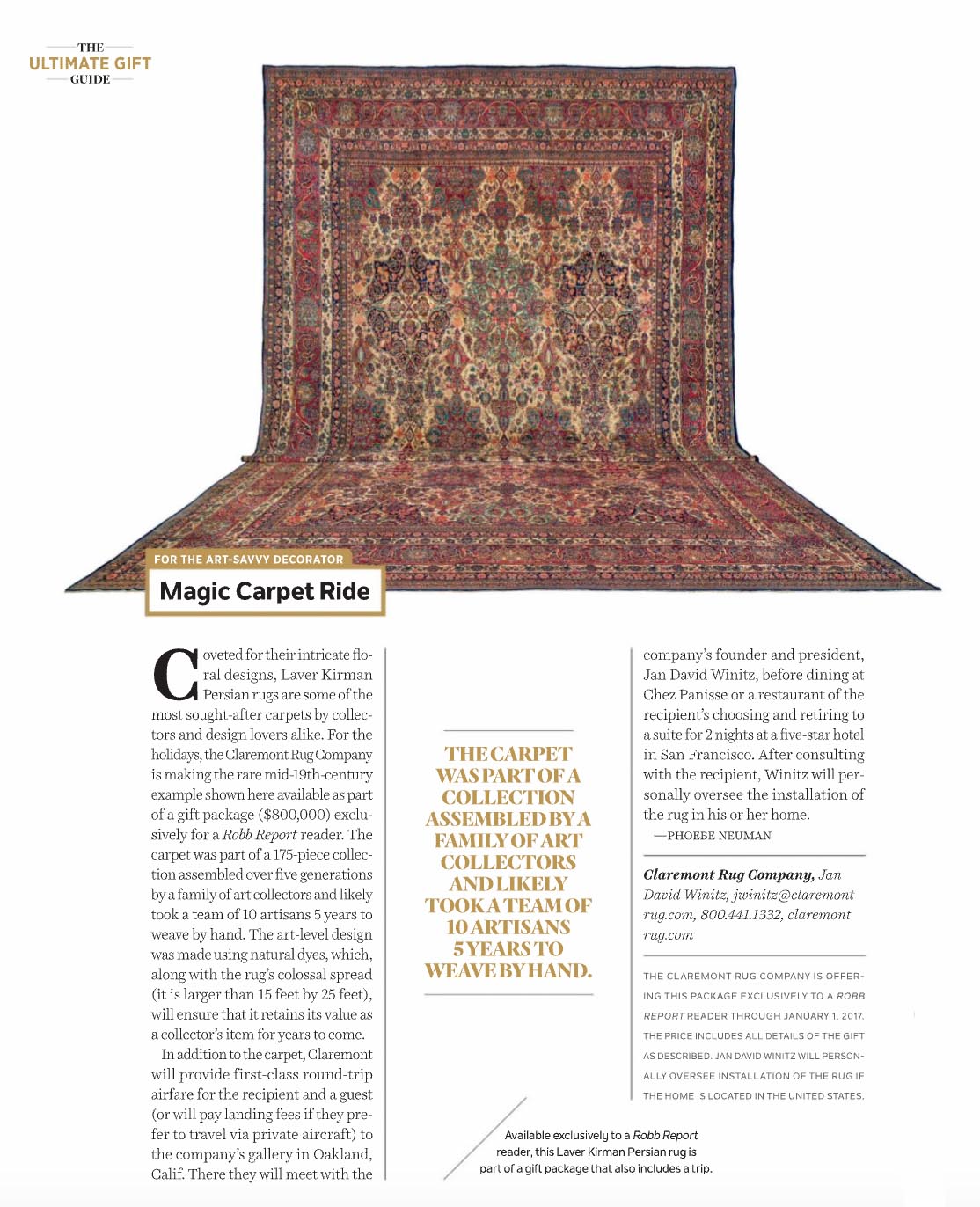 News of the extravagant gift package was reported in the Miami Herald on December 5th. 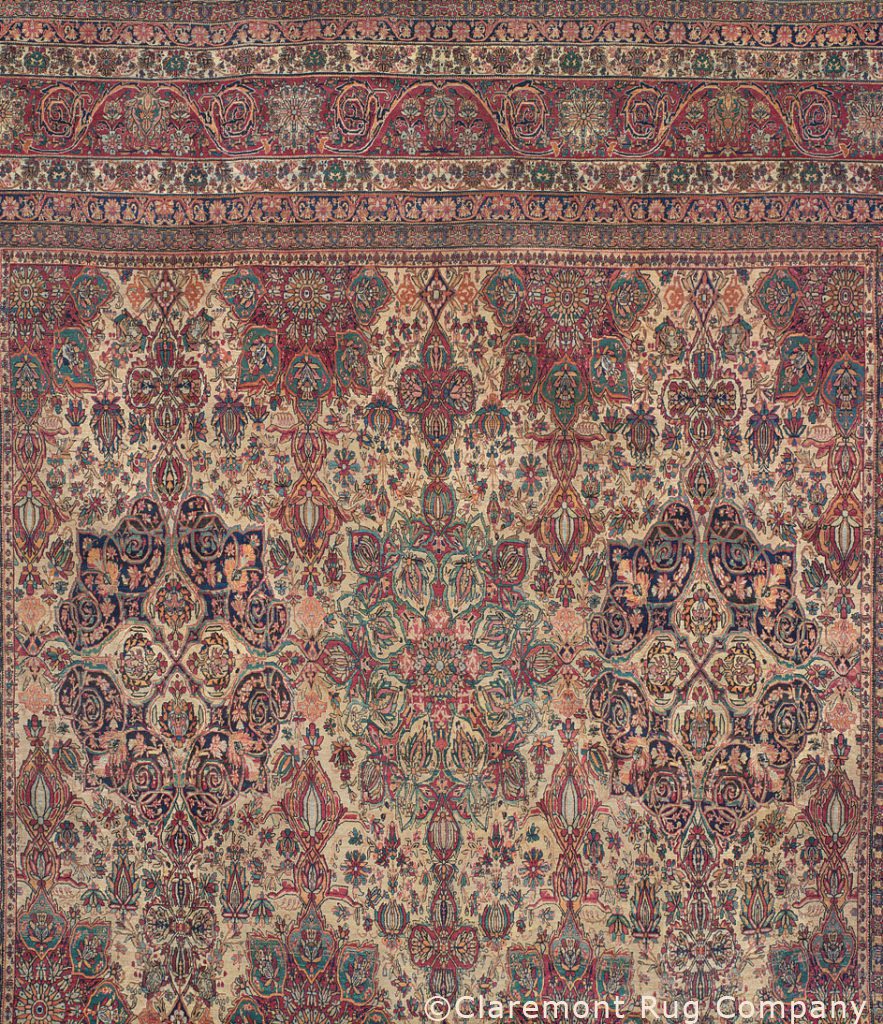 The rug, part of a $800,000 package of travel and experiences that includes two consultations with Claremont president and founder, Jan David Winitz, was chosen as one of this year’s “31 Greatest Gifts of the Season” by the global magazine for luxury lifestyle.

“Each year Robb Report does a comprehensive global search to compile its elite gift guide,” said Winitz. “The eclectic nature of Robb’s selections is fitting particularly because collectors of investment-level antique Oriental rugs appreciate not only the finest, most unique products available, but once-in-a-lifetime experiences to accompany them.”

The Robb article about the Claremont offering, entitled “Magic Carpet Ride,” details the rug whose provenance was its inclusion in a 175-piece private collection (“The Intercontinental Collection”) acquired by Claremont in 2010. The trove had been assembled by a family over five generations and had been housed in four principal residences in the U.S.., Europe and South America. The extremely rare carpet had not been offered for sale previously by Claremont.

The Claremont package included: the one-in-the-world, palace-size Persian carpet circa 1850; first class round trip airfare for two (or landing fees for private aircraft); private consultation, tour of the gallery, and presentation of the rug by Winitz; a suite for two nights at a five-star hotel and dinner at a Michelin-starred restaurant.

Other “gifts” featured in the Robb issue include a $225 million superyacht, the first private supersonic jet ($120 million), Eric Clapton’s 1939 Martin Acoustic guitar ($1 million) and a five-day apprenticeship for two at the Michelin three-star Restaurant at Meadowood in the Napa Valley ($85,000).

In announcing the selections, the Robb editors said, “Robb Report’s Ultimate Gift Guide celebrates the season by exploring the bounds of human creativity and connoisseurship. For our 33rd installment, the editors searched far and wide for inspiration.” According to Robb editor-in-chief Brett Anderson, “The editors spend 12 long months searching the market for the best of the best in class for every issue, but this annual holiday compilation devoted to the ultimate in gift giving spotlights the most incredible products and experiences to be found anywhere, at any time.