You are here: Home1 / Blog2 / PRESS3 / Golden State4 / Amidst Much Adversity, An Oakland Antique Rug Gallery Not Only Survives,... 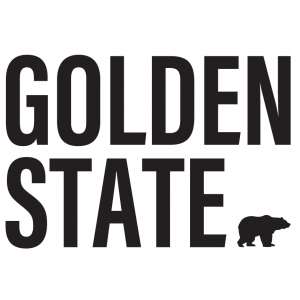 Amidst Much Adversity, An Oakland Antique Rug Gallery Not Only Survives, It Prospers 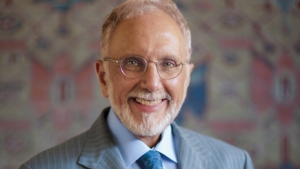 In baseball, there are two types of curveballs: a hanging curve, which batters often hit hard, and a hard-breaking one, which can be almost unhittable.

Since 1980, Winitz had operated Claremont Rug Company almost exclusively from its 25,000-square-foot gallery on Claremont Avenue in northern Oakland. Apart from occasional business trips to visit prominent clients in their homes in various regions of the country, Winitz leveraged his brick-and-mortar storefront as the foundation of the business. In that time, the now 67-year-old grew his client base and his inventory of collectible antique oriental art carpets to levels that few, if any, other dealers or gallery owners around the world can match.

At the onset of the Covid-19 pandemic, however, Winitz was forced to temporarily close the gallery. Moreover, he had to do it with only a few days’ notice.

“Everyone was in shock and everyone slowed down,” he says of business owners all across the country who faced similar dilemmas. “The key that I’ve found is that when everyone slows down, that’s the time to speed up, but to do so intelligently.”

Winitz assessed the situation and quickly understood that if his clients couldn’t come to him, he would have to bring the gallery to his clients, albeit virtually. He also recognized that as people were stuck in isolation or quarantining at home, they would be—quite literally—a captive audience. Claremont Rug Company already had a dynamic and effective website, which Winitz credits to his clientele. More specifically, he gives credit to one specific client, John Warnock, the former CEO of Adobe Systems, who during the late 1980s introduced Winitz to the World Wide Web, which was still in its infancy at the time.

“The key that I’ve found is that when everyone slows down, that’s the time to speed up, but to do so intelligently.”

“I went to his house to give a presentation of rugs,” Winitz recalls, “and he asked if I was on the World Wide Web yet. He took me into his office and talked about all the possibilities of the web and how it would increase the company’s exposure significantly. At the time, I was thinking about opening a gallery in New York and he said that wouldn’t be the best use of our funds.”

Instead of expanding his gallery’s physical presence on the East Coast, Winitz invested in a website, which has remained a strength of the business ever since. “We’ve always been ahead of the curve,” he says, “because of the people we are connected to.”

So as the pandemic set in, Winitz realized that he needed to change things up big time. After 40 years of never putting his goods on sale, he broke new ground for Claremont by instituting a 20% off Incentive program that include free two-way shipping on approval. But he knew this wouldn’t be enough as his gallery’s website became his only contact with the public. To effectively leverage it, Winitz invested in the website even further, tackling all of the ideas that he and his team had previously considered as ways to further advance the site and its capabilities but never got to. Within a few weeks, the gallery’s international presence had grown notably, thanks to his website development team’s efforts to bolster the site’s SEO (Search Engine Optimization).

Shortly thereafter, visitors, new and old, benefited from a more sophisticated search feature on the site, more (and better) rug images and, over the next few months, greatly amplified and illustrated articles about the culture and regional styles of individual pieces. “When new or prospective clients called us about a specific rug, we discovered that they were more oriented than clients who [previously] only came into the store,” Winitz says. “By just following the various links [on the website], they had access to all this background information and they also had time to read it. We quickly discovered that this was a boon.” 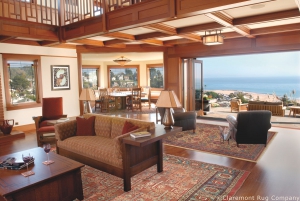 This wasn’t the first time that Winitz had to creatively adapt to challenging business circumstances. Claremont Rug Company was dealt a potentially crippling blow back in 1989, when the San Francisco earthquake rendered the Bay Bridge impassable for more than half a year. At that time, Silicon Valley was a crucial market for the gallery, and with the bridge out of commission so, too, was Winitz’s access to that area.

In those years, Winitz printed elaborate, 25-page brochures, which the company circulated to high-net-worth cities, towns, and neighborhoods throughout California. With access to one key market temporarily denied, Winitz decided to increase the number of printed copies of those brochures—he went from 3,000 or 4,000 copies per publication run to 75,000. And from there he circulated them to key residential areas across the country.

“I’ve always felt that if you’re going to try something new you have to do it big. If you nibble at it, you’re not going to learn if it can work.”

The tactic didn’t just work, it skyrocketed the Claremont Rug Company into a new echelon of specialized galleries. For Winitz, that was a turning point—a moment in time when he knew his gallery and, more important, how he approached the business of buying and selling antique Oriental rugs had staying power.

Winitz was first introduced to these exotic woven works of art as a child, accompanying his grandmother (a collector of Asian Art) on buying trips throughout the country and later across Europe. Although enraptured by their beauty, even at a young age, Winitz didn’t foresee himself pursuing the trade. But after a couple of years working in education, a 25-year-old Winitz decided to switch professions and passionately pursued the establishment of his own gallery. “My wife, Christine, and I both saw that fine rugs weren’t being presented by dealers in the way that we would,” he recalls. “They were presented as a decorative item and an element of décor, but in our opinion, they’re truly an art form.

“All human beings have their own artistic impulse, how they express themselves to others and the world. Weavers were making these rugs as an art form that expressed their cultural wisdom. The way these tribal people expressed themselves for generations was through the creation of these rugs. The designs and symbols were precious to those people. Many of the same designs and symbols in tribal rugs can be seen on cave walls in Turkmenistan.”

Since that career shift more than four decades ago, Winitz now feels that the business of antique oriental rugs and carpets is one that he was destined to pursue. Today, his gallery (and the network of clients and private collections that support it) serves as the leading source of connoisseur-caliber and highly collectible antique Persian rugs anywhere in the world. “Over the past 42 years, we have been ‘unlocking’ private collections to provide highly unique, rare carpets to clients,” he explains. “We have also been developing relationships with dye makers and sheepherders, who provided us with the staples required for rug restoration. And we’ve trained and nurtured a staff of professionals who are more educators than salespeople.”

Winitz’s biggest challenge today—aside from temporary gallery closures and other Covid-related obstacles—is acquiring a steam flow of high-quality, collectible-grade rugs and carpets to resell. At this point, selling them is the easy part; Winitz just needs to obtain them first. As he explains, more and more connoisseurs, including newcomers to the hobby, are approaching the acquisition of these rugs as appreciable assets. As such, once they’re acquired, many rugs are unlikely to reappear on the market.

“We are still able through my long-standing contacts with collectors and with the aid of our buying network to periodically offer grand troves,” he says. “However, we also know that many of the rugs that our seasoned clients are acquiring from us will remain with them in their residences and private rug cellars. The rugs will not come to the market again.” 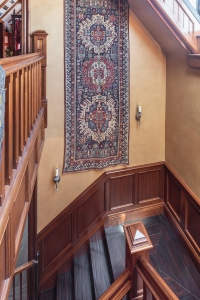 “We are still able through my long-standing contacts with collectors and with the aid of our buying network to periodically offer grand troves,” he says. “However, we also know that many of the rugs that our seasoned clients are acquiring from us will remain with them in their residences and private rug cellars. The rugs will not come to the market again.”

In some respects, the strong market that now exists for the most superlative antique Oriental rugs and carpets is confirmation that Winitz has effectively changed many people’s perception of these antique textiles, not to mention their contextual values. It’s just another hurdle that he must overcome. Fortunately, Winitz is up to the task. “Life is bringing a lot of challenges right now,” he says, “but I’m someone who loves a challenge.”