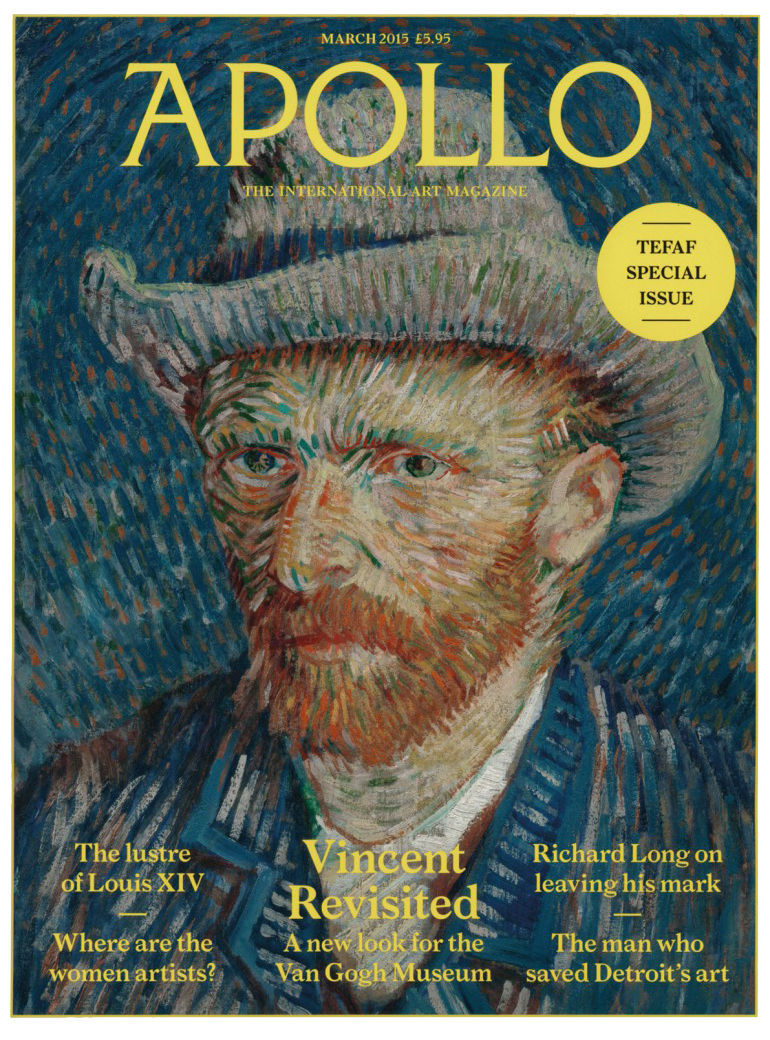 Early Persian carpets are both rare and fragile, and those that have survived have become museum pieces. Though the US embargo on goods from Iran has dampened the market, examples from around 1880-1910 continue to attract collectors.

In 1948, a Russian archaeologist investigating a Scythian burial mound in the Altai Mountains discovered a Pazyryk rug frozen into a ball of ice. Now in the State Hermitage Museum, the piece was probably made around 500 BC by Scythian nomads. It is a marvel of both technique and design, employing a system of knotting still used by Turkish carpet makers today, its nest of borders richly decorated with abstract patterns, horses, stags and griffins. It is a unique survivor, but archaeological evidence suggests that the weaving of pile rugs existed in the Middle East and other parts of Central, Northwest, and Eastern Asia long before 2000 BC.

Throughout history these carpets have been treasured. Cleopatra, according to legend, was delivered to Caesar in one. Eastern carpets feature in Italian painting from the 14th-century and from the late 16th in northern painting, as the Dutch began to trade heavily in such luxuries. Holbein emphasized the status of his sitters by incorporating an Anatolian carpet into his portraits, of a kind that now bears the artist’s name. Complete examples of early rugs are rare and are now mostly to be found in museums – such as the Ardabil Carpet in London’s Victoria and Albert Museum, made as one of a matching pair in the late 1530s for the shrine at Ardabil, Northwest Iran.

It was in the late 16th and 17th-centuries that the artistry of the Persian carpet peaked, under the Safavid ruler Shah ‘Abbas. Making Isfahan his capital in 1598, ‘Abbas established royal weaving ateliers and Persian carpets began to be exported to Europe in large numbers. This resulted in the emergence of a strong foreign market, which flourished until the second decade of the 20th-century when handmade production began to decline. Significant schools of carpet weaving also developed in the valleys of the Caucuses, Anatolia, the Turkoman tribal lands of Central Asia and into Northern India. 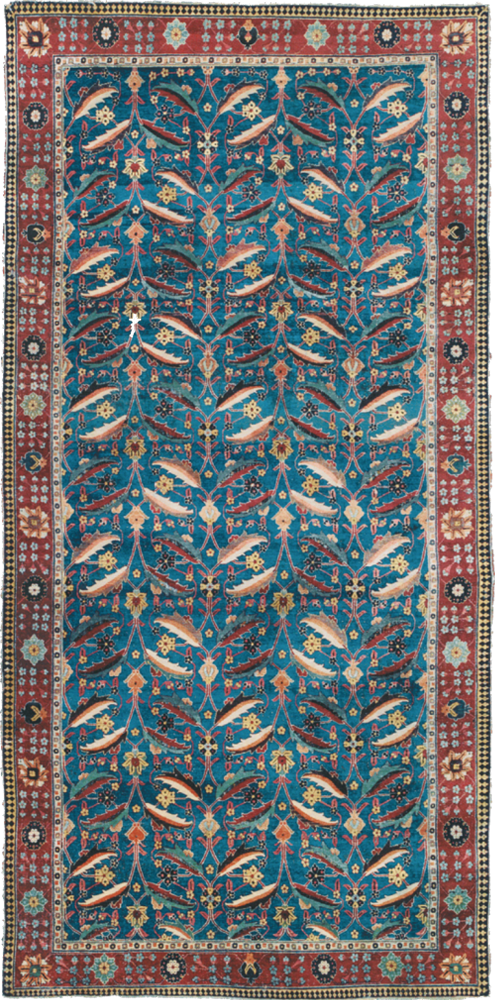 In the wake of the financial crisis of 2008 the market in oriental carpets has bifurcated dramatically. In April 2010 at Christie’s London, a mid 17th-century Kirman ‘vase’ carpet from South East Persia that once belonged to the comtesse de Behague reached an astonishing £6.2m (estimate £200,000-£300,000; Fig.2). ‘These outstanding pieces had always commended high prices,’ says Louise Broadhurst, a director and specialist at the auction house, ‘but this stepped away’. Other high prices for exceptional pieces have since been secured. Last April at Christie’s London, the Baillet-Latour Mamluk Carpet – a rare survivor from Mamluk Egypt dated to the early 16th-century – sold for £782,500 (estimate £250,000-£350,000). And in June 2013, the 17th-century Sickle-Leaf Carpet achieved a record-breaking $33.8m (estimate $5m-$7m) at Sotheby’s New York (Fig. 1).

This beautiful carpet also employs the rare ‘vase’ technique, which uses three weft ‘shoots’ that allow for a fine weave and crisp drawing. Probably Kirman, the piece is also likely to have been produced by a royal factory, and its dynamic, multidimensional pattern-making – combined with its unusual red ground and still fresh colours – give this carpet its remarkable vitality. As Mary Jo Otsea, senior consultant in Sotheby’s Rugs & Carpets department, comments: ‘In the last 20 years prices for these classical carpets have risen exponentially.’ She adds: ‘Institutional buying in the Middle East has had a big impact on the market, especially for the very old and very rare pieces.’ Indeed, back in 1999 Sheikh Hamad bin Khalifa Al-Thani bought a 16th-century Tabriz medallion carpet from the Rothschild family collections at Christie’s London for £1.6m – now a prize of the Museum of Islamic Art in Qatar. 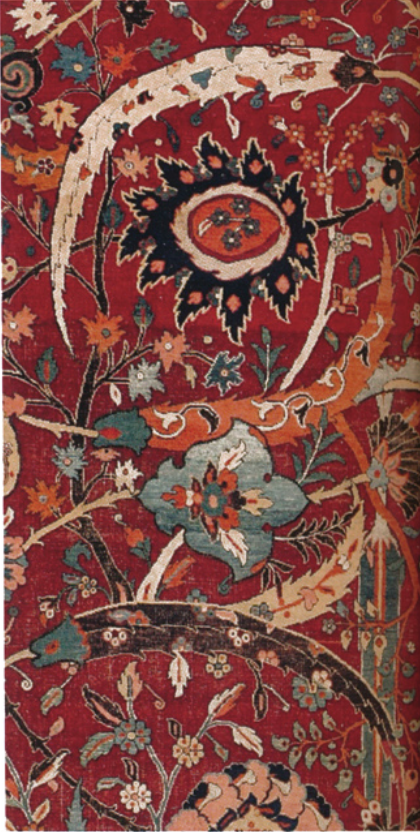 ‘The market in old Safavid, old Kirman rugs, or high-end Persian city carpets from Isfahan, Kashan or Tehran is very strong,’ says Mark Dance, head of the carpet department at Bonhams. According to Simon Franses of historic dealership Franses, the reason for this is the very short supply at the top end. ‘For a long period, up until about 2007, these were drawn out by high prices. There is now a very tiny supply of top pieces in great condition.’ Otsea adds: ‘The market is narrowing; it is maturing. The top collectors already have a number of rugs, so a carpet has to be special to attract attraction.’

Meanwhile, the middle and bottom end of the market have struggled as tastes in interior decoration have shifted from 19th-century Persian rugs to bespoke contemporary pieces. Another dampener has been the reimposition in 2010 of the US embargo on all goods coming out of Iran. While antique rugs – with a certificate of authenticity – are immune from sanctions, the embargo has inhibited trade. One consequence of this shrinking market has been a reduction of auction sales (Christie’s is the only one of the big three to have maintained regular dedicated carpet sales.) Another has been the disappearance of the middle market. Broadhurst reports that 20 years ago the market ‘was predominantly driven by the trade where as now over 60 per cent of our buyers are private’. These are active both in Europe and the Middle East.

There are pockets of strength, however, besides the classical carpets. Broadhurst points to the silk market, which encompasses ‘carpets from Turkey (early 20th-century Koum Kapi, particularly signed by a master weaver) but also top quality Persian silk rugs and carpets from Tabriz and Heriz’ and early Caucasian carpets from the 18th-century. She is also optimistic about a revival of interest in the late 19th-century decorative market (£10,000-£100,000), encouraged by a shift in taste among interior designers. Aaron Nejad, founder five years ago of London rug and antique textile fair, LARTA, which runs this year from 16-19 April, agrees. He will be bringing a small Motashem rug to the fair priced at £12,500, but says Caucasian rugs too are ‘still very popular’, fetching up to £30,000.

Based in the US but selling to the world, Jan David Winitz of the Claremont Rug Company identifies a strong market for carpets from around 1800 to 1910. This includes Ferahan and Ferahan Sarouk carpets made for the aristocracy (he has currently a large, saffron-coloured example from around 1870 priced at $250,000); rare Motashem Kashan rugs, especially the earlier pieces (up to $300,000); fine examples of Persian village weaving, such as those from Bakshaish, in the Heriz district of what is now Azerbaijan (up to $400,000 for top examples of very large size), and antique Caucasian tribal rugs. These are valued for their daring use of colour, originality and ‘deep sense of unity’, according to Winitz, who adds: ‘There is so much variety because each valley of the Caucasus had its own design pool. This is our largest market.’

Finally, Simon Franses says that there are bargains to be had if you have an eye for quality and condition. He cites the Douglass Mughal ‘Millefleurs’ prayer rug, which was probably commissioned for the court and produced by a specialist workshop in Lahore or Kashmir. This 18th-century classical Indian piece sold a Christie’s London last October for £338,500 – ‘relatively speaking, a conservative price, given what it was’.