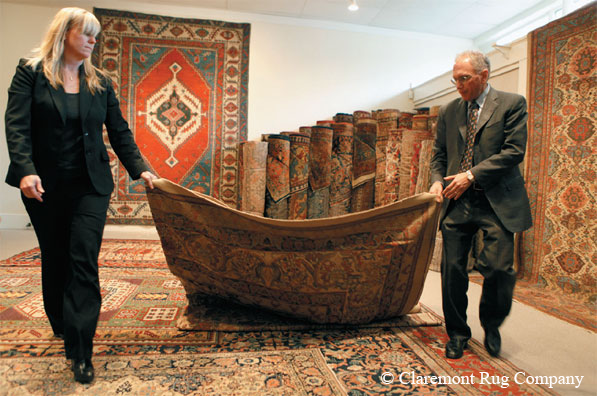 Nancy Brinkley helps Jan David Winitz unfurl an antique rug at his Claremont Rug Co. in Oakland. Winitz, who founded the business in 1980 with his wife, has become one of the world’s leading sellers of antique Oriental rugs.

The artisan weavers who crafted the Persian rug on which Jan David Winitz stands tied the first knots on the oversize piece before Abraham Lincoln even became a congressman.

Winitz expects the Kermanshah carpet, which probably took about seven years to complete, to sell for roughly $700,000.

Working out of an unassuming storefront on Claremont Avenue in Oakland, Winitz, with his Claremont Rug Co., has become one of the world’s leading purveyors of antique, art-level Oriental rugs, most from the 19th-century.

Over the past few years, as the economy has sputtered, he has seen a marked increase in customers who make their living in finance – investment bankers, fund managers, and venture capitalists.

“They, in particular, see the rugs as a compelling arena for diversification, as precious tangible assets become a more central investment option,” says Winitz, 55, who founded the company in 1980 with his wife, Christine, and a silent partner.

While the value of such assets is difficult to track because they are often unique and usually sold privately, art market indexes suggest that when stocks are down, prices of things like antique carpets, old coins, art and other collectibles commonly go up.

For three years ending Oct. 31, 2010 (the most recent data available), an index by Art Market Research that monitors such items was up 2 percent while the total return on the Dow Jones industrial average was negative 12.85 percent.

Winitz stands in front of an antique Persian rug from around 1850.

Last year was also record-setting for the textiles: In April, a 17th-century Kirman rug sold at Christie’s for $9.6 million, walloping the previous record set a few months earlier of $4.3 million for a Persian prayer rug auctioned at Sotheby’s. “There has been a tremendous turn toward collecting rugs in the last three years. What has happened in the last three years, I couldn’t have fathomed,” he said. “Many, many people are buying rugs to part on the walls as art rather than to put them under foot.”

Some of Winitz’s clients have built cedar rug cellars, complete with bar, piped-in music and racks along the wall displaying their excess inventory. “That’s their private space where they’ll go down just to look at the rugs,” he said.

Increasingly, his customers fly him, his team, and dozens of rugs to their homes – in places like the West Indies, Aspen and Martha’s Vineyard – to outfit them with as many as 70 19th-century carpets, ranging in price from $20,000 to $500,000.

In 2005 when Winitz began offering this service, called the Whole Home Project, he had three clients. Last year, there were 51, and with 2011 just weeks old, six more customers have signed up.

To meet increased demand, Winitz last year added five buyers to a team of 22, hired a second full-time librarian and increased his staff of restoration workers from 48 to 55.

There’s also been an explosion in Internet-related sales. In 2010, he said, rugs selected by clients browsing the company’s online gallery accounted for 55 percent of sales, up from 7 percent in 2005. “This has brought us projects as far afield as New Zealand, Sweden, the West Indies and Singapore, as well as a new phenomenon – new, highly educated long-distance clients who are buying rugs sight unseen,” he said. “I have always called rugs undiscovered art,” said Winitz, a former English teacher. “For me, to be able to help people discover this art form and the magic of it is incredibly fulfilling.” 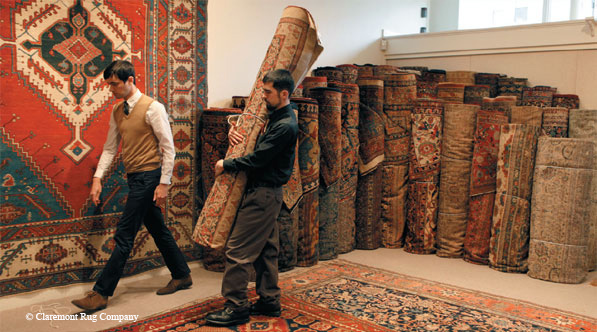 Employees Brian James (left) and Daniel Larkin remove an antique rug from one of several showrooms at Claremont Rug Co. in Oakland. The business, which began with a 40-rug inventory in 1980, now has about 3,500 carpets in stock.

One such customer who values the beauty of these antique carpets over their resale value is Warren Winiarski, whose Stag’s Leap Wine Cellars made the Cabernet that bested French Bordeaux at the 1976 Judgment of Paris tasting. “I love these carpets for their beauty,” he said, which complements the view from his hillside home overlooking a vineyard. “The interior of the house gains in its ability to comfort us and enhance our lives by the fact that we’re looking at beautiful things on the floors,” said Winiarski, who bought his first antique Oriental rug from Winitz about 25 years ago and now owns six that cover his cherry wood floors.

Visitors to his Napa Valley home are greeted by a Hadji Jallili Tabriz carpet from the late 1800s decorated with climbing vines and vessels that reflect his livelihood.

Winitz got hooked on rugs as a boy in Brooklyn Heights. His grandmother, who fell in love with the carpets on a tour of the Near East, was a major collector and passed on her knowledge to her grandson.

He jokes that the predilection skipped a generation – his father was Milton Winitz, a prominent biochemist known for inventing a synthetic, cold liquid diet that held promise for astronauts, and for which Winitz and his older brother served as test subjects.

By the time Winitz was in his teens, his family had moved to Palo Alto. “I bought my first rug when I was in high school,” he said. “There was a rug under a chest in an antique store; it was from the Caucasus Mountains. It was $250, I think. I bought it in part because I knew it was a very good rug – and I had a girlfriend at the time who was interested in art and I kind of wanted to impress her.”

Winitz still has the 3-by-5 rug at home, but the girlfriend is long gone.

He married Christine Hunt, a fellow collector, in 1980, the year they opened the store. “When I was teaching school, I would occasionally sell rugs privately to supplement my non-income. Christine was one of my best clients,” he said. “We have a standing joke that I married her to get all my rugs back, and she married me so she wouldn’t have to keep paying for them.”

As fate would have it, tech was booming in their first few years of business. “Major players in Silicon Valley would just walk in the door,” he said of the shop, which at the time had an inventory of about 40 rugs. That has grown to 3,500.

That’s not counting the couple’s Berkeley home. “We have about probably 50 rugs on display at any given time,” he said. “We continue to change them. They’re underfoot, on the walls, on tables, draped on furniture.” “We even have special rugs we use as lap blankets in the winter.”