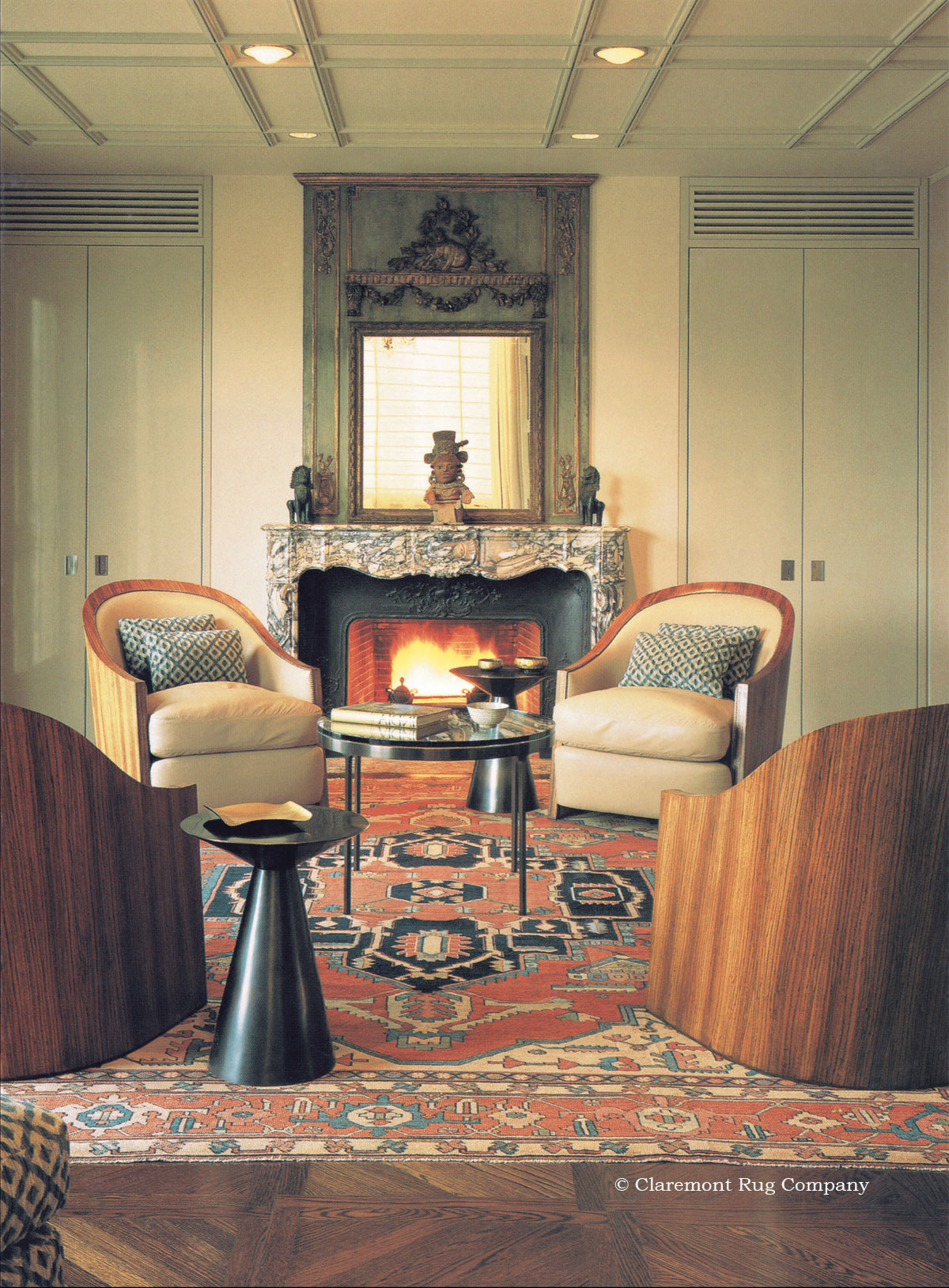 The unusually spacious design of this 150-year-old Serapi highlights the immediately recognizable interest in connoisseurship reflected in this distinctive sitting room. This spectacular carpet harmonizes the Pre-Columbian artifacts, Napoleonic mantle and mirror and elegant designer chairs.

OAKLAND, CA.- While Jan David Winitz’s clients are diverse in their backgrounds and reside on six continents, they share a passion for great art and understand how their tastes can be melded into complementary matching of paintings, sculpture and furniture with antique Oriental rugs from the Second Golden Age of Persian Weaving.

In the first segment of this two-part series, the president and founder of Claremont Rug Company related anecdotes of how his clients asked him to place rugs that would highlight and complement other collections of their art to create a personal ethos in their residences. In this segment, he describes how he helps guide the process of selecting art-level Second Golden Age rugs for his clients.

“Many of the residences where I have placed substantial numbers of antique rugs are of contemporary design,” he says. “One which particularly stands out is a major whole home project where the interior designer initially said, ‘Oriental rugs would not work.’ Eighteen rugs later, the gentleman is now a great advocate and the designer has a better understanding of Oriental rugs.

“Coincidentally, Claremont’s collection of antique art rugs has been primarily built through the acquisition of entire private collections,” says Winitz, “some of which have been held by families for three to even five generations. Often the residences in which were they initially displayed also had extensive collections of classical antiques, sculpture, paintings and furniture at their root. But the rugs work equally well with the exotic woods and stone of contemporary homes.

“I find it both fascinating and gratifying when I look at publications that celebrate other forms of art in a room setting,” he says, “because more often than not I will see antique Oriental rugs pictured, serving as an integral aspect of graciousness of the residence.”

When Winitz opened Claremont nearly four decades ago, it was based on the concept that the finest examples of antique Oriental rugs from the Second Golden Age, ca. 1800 to ca. 1910, deserved to be recognized as great art as precious tangible assets. What has occurred over time has proved has validated his thesis. From an inventory of 40 rugs with a small set of clients in the San Francisco Bay Area, he has built a Gallery with a collection of more than 2500 Second Golden Age pieces and with clients on six continents.

”In the milieu of global art collectors,” he says, “great antique Oriental rugs are very much on the list what they seek to acquire and to relish living with.”

Sara Plumbly, Head of the Islamic Art Department, commented: “It was a great pleasure to have been part of the journey of this spectacular painting, formerly in the collection of Bonnet House Museum and Gardens. Bringing it to the market for the first time in over 100 years was a very special moment. It almost doubled its pre-sale estimate when it sold for over £2.3 million. Another highlight of the auction was a late 15th or early 16th century Veneto-Saracenic bucket, which was signed by the master Mahmud Al-Kurdi, and which tripled its pre-sale estimate when it sold for £1,822,500 / $2,504,115 / €2,135,970. Throughout the sale we saw very engaged bidding from 28 countries, across 4 continents.”

The top lot of the auction was the magnificent Qajar multiple portrait depicting the grandsons of Fath ‘Ali Shah in the Saf-e Salam, a Persian New Year (Norouz) procession. Attributable to the court artist ‘Abdullah Khan, this remarkable painting exemplifies the glory of the Qajar era, and established a new world auction record for any Qajar painting, realising £2,302,500 / $3,163,635 €2,698,530.

Comments from Jan David Winitz, founder/president of Claremont Rug Company: “The auction’s ‘star,’ was an important 17th century Safavid ‘Polonaise’ carpet that we identify as a Level 1 (Museum-Level) in our Oriental Rug Pyramid (©). It sold for $2.83 million (U.S.). I was gratified by the tremendous interest in rugs from ”The Second Golden Age of Persian Weaving (ca. 1800 to ca. 1910), as it reflects what we have seen in the market over the past year. It is also important to note that almost all the antique Oriental rugs that were offered were sold.

“The carpets that I categorize as Level 2 (High-Collectible) or Level 3 (Connoisseur-Caliber) sold without exception at or above the pre-sale estimates, while the great majority of the Level 4 (High-Decorative) carpets offered also sold.

“My overall observation, based on the results of this sale and the interest during the pandemic from our clients who reside on six continents, is that antique Oriental rugs are increasingly a significant segment for art and antique aficionados. I believe that collectors are in the process of understanding that, as we have been saying, that this generation will be the last to have access to the finest rugs from the 19th and turn of the 20th centuries.”

Louise Broadhurst, Head of the Oriental Carpet Department, commented: “Presented for the first time at auction since it was woven over four hundred years ago, this Safavid silk Polonaise carpet, made in the 17th century in Central Persia, was formerly part of the noble collection of the Italian Pio Falcò family, its identical pair remains within the prestigious Doria Pamphilj collection displayed in the Palazzo del Principe in Genoa. Retaining an astonishing amount of its silk pile and gold and silver-thread, it exemplifies the golden age of Safavid weaving under Shah ‘Abbas the Great. An additional auction highlight included a previously unpublished and unrecorded Safavid fragment from a once truly magnificent Kirman ‘Vase’ carpet woven in the first half of the 17th century, which sold for £562,500 / $772,875 / €659,250.”