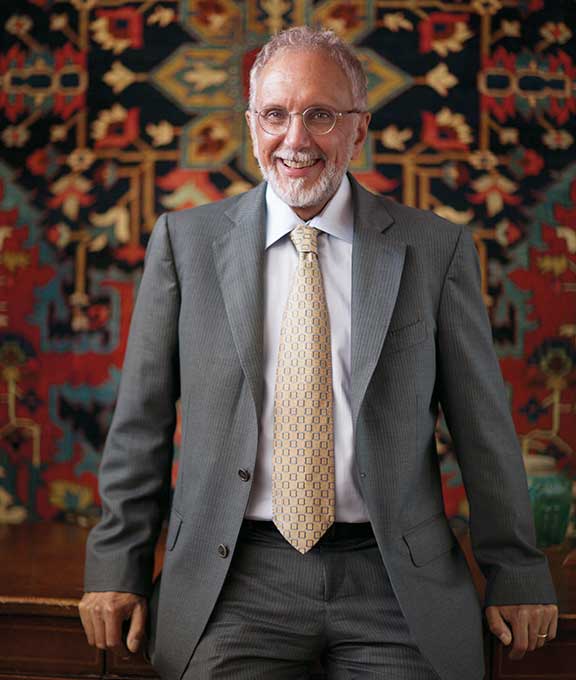 Few could have predicted it would prove the perfect platform for the sale of 19th-century museum-caliber Oriental rugs with price tags as high as $225,000.

It was a surprise to Jan David Winitz, too. The founder and president of Claremont Rug Company admits to being fairly rattled when the shelter-in-place orders came on March 16. “We sell generally through our Oakland, California gallery or in-home showings. Within 24 hours, those were both shut down,” says Winitz, “That was a big shock—obviously.”

But Winitz refused to see it as a problem. “That word is verboten in our business because it means something insurmountable,” he says, noting that he learned that kind of resilient thinking from his grandmother, who always maintained a positive outlook. “She looked at everything in life like an elaborate board game,” he recalls. “She always said, ‘Nothing is a problem, nothing is insurmountable. It’s just a challenge to be figured out.’ So we started to work at it.”

It didn’t take long to spot opportunity. While COVID-19 is wreaking havoc on the lion’s share of the economy, some businesses are finding the shelter-in-place climate has actually created avenues for deeper connection with both existing and prospective clients. Winitz and his team surmised that, as was the case after 9/11, people were looking for a way to ease the emotional burden and cope with a new normal.

They were also looking for something to do. While previously, the biggest roadblock his sales team had seen was too-busy clients lacking the time to focus on making such a sizable purchase, time was now something they had plenty of. “They’re home, they’re bored, and these are people who are used to having active lives. I mean, how many Netflix movies can you watch?” says Winitz. “We realized, if we approached our clientele in the right way, we’d have a captive audience.”

They also knew the website they had wasn’t going to cut it, and they would need to invest in some enhancements to the virtual gallery— “something we had been thinking about for a couple of years but had never gotten around to.” So they commissioned their web design company to work “around the clock” to deliver multiple improvements to the website, such as adding multiple images for each rug so prospective buyers could see the item from more than one angle; beefing up the search functionality and simplifying the user experience, so clients could find just what they were looking for; and adding a feature that allows users to track the last 10 pieces they’d looked at. “We also added more videos and more articles, so we really propped up the website to make it more of a destination,” says Winitz. “Believe it or not, it took about three weeks to make all the improvements we had been talking about for two years.”

Next, Winitz knew he’d need some sort of incentive to get people’s attention and jump-start activity. So he did something he’d never before done: offered a 20% discount on all rugs. Winitz had some concern about margins, but in the end his hunch that he’d see a net positive turned out to be right: from March 17 through May 21, the company sold 95 rare antique rugs, compared with 60 rugs sold in 2019 during the same two-month period. Even with the lower profit margin, that represented a 45% increase in revenue over last year’s numbers. “We’re talking about rugs that sell for five and six figures,” says Winitz. “It’s pretty shocking, actually.”

Technology also enabled Winitz to give clients something akin to the experience they would have had pre-COVID when purchasing his floor art: the in-home delivery presentation. “So now we do virtual rug showings, where we ship the rug and then have a Zoom call where the designer and architect can be part of the presentation.” These virtual big reveals have, as a side benefit, introduced next-generation family members—and possibly a new market for Claremont Rug Company—to the beauty of antique rugs. Given how little effort is required, Millennial children have joined the Zoom calls and have shown far more interest than their parents had thought they would, says Winitz. “We’ve now seen it repeated quite a few times, where a kid in their 20s will get very excited and say, ‘That’s so beautiful,’ and their parent says ‘I didn’t think you’d like this.’”

A booming business is helping Winitz stay away from the 24/7 COVID-related news, which he says is not helpful for anyone’s mental health, and for himself, has an adverse effect on his productivity and effectiveness. “It’s important to be informed, but it’s not helpful to get the same message over and over and over again, because as humans we’re not capable of handling that emotionally.”

Winitz expresses gratitude for his good fortune to be doing what he loves. “I’m surrounded by the most beautiful art in the world, the staff are my friends,” he says. “I don’t go to work every day—I go to fun every day.”