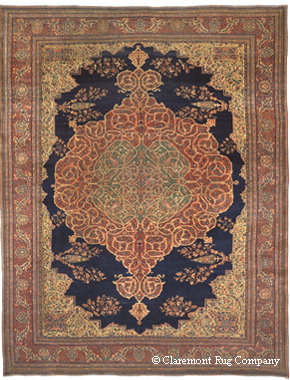 OAKLAND, Calif. Oct 15, 2013 – Claremont Rug Company founder and president Jan David Winitz today announced the acquisition of an important trove of first caliber 19th-century Oriental rugs from the estate of a prominent family. Dubbed “The Chappaqua Family Collection,” the rugs were assembled by a successful New York businessman and his wife, who owned three residences: in Manhattan, Chappaqua, NY, and on the Maine coast. The Chappaqua Family Collection consists of approximately 100 pieces and includes many room sizes and oversized as well as several palace size carpets and numerous high-collectible tribal rugs.”The breadth of their appreciation included formal Laver Kirmans and Ferahan Sarouks, geometric Caucasian Kazaks, Serapis and Tabrizs from Azerbaijan, tribal Qashqai and Laver Kirman rugs from Southern Persia,” said Winitz, author of the The Guide to Purchasing an Oriental Rug. “An especially amazing group of Sultanabads completes the ensemble.

“When I was recently speaking with their daughter, she told me that her parents found the diverse character and creative expression of the different regions of Persia and the Caucasus consistently intriguing,” he said, adding that terms of the late father’s will instructed that the collection be offered to Claremont exclusively.

“It is an honor to have achieved a position of this stature in the antique rug world. We have been fortunate to have been singled out by prominent collectors and families over the years to dispose of their collections,” he said. “In 2008, we were selected by another New York family to take ownership and subsequently offer for sale what became known as the Hudson River Valley Collection.” That group of rugs, numbering nearly 400, was hailed globally as the most significant offering of the early 21st-century.

The Chappaqua family began assembling their collection in the 1950s and soon the rugs were overflowing their Chappaqua home. Pieces began to make their way to the floors and walls of their New York apartment. According to the family’s eldest daughter, the mother and father soon began to strategize about displaying them as pieces of art, choosing where in each home a rug showed at its best and created the particular ambiance they wished.

In the 1960s, the family opened a summer home on the Maine coast for their three children and “the cousins.” The daughter says that her parents joked that they bought this substantial home as a place for the kids to play and to provide more display space for them to enjoy the tribal and Northwest Persian rugs they had become attracted to.

They continued to collect well after their homes were full. “They put a rug in every nook,” the daughter told Winitz. She said, “It sounds like too much, but it wasn’t. They just created a wonderland. Their houses were very personal statements of what they found beautiful or deep or joyful. Their other art-paintings, glass works, and pottery-all exuded the same freshness and individuality as the carpets.”

Winitz said that he expected significant interest in the Collection for his growing international list of clients who are increasingly seeking out rugs from the Second Golden Age of Persian Weaving, ca. 1800 to ca. 1910. “Many of our clients maintain residences on multiple continents and visit the Gallery via the Internet,” he said, noting that more than 60 percent of his transactions have an Internet component. “The entire Chappaqua Collection will be available for viewing on our website (www.claremontrug.com).”

In addition to the Chappaqua rugs, there are more than 900 rugs pictured on the Claremont website.