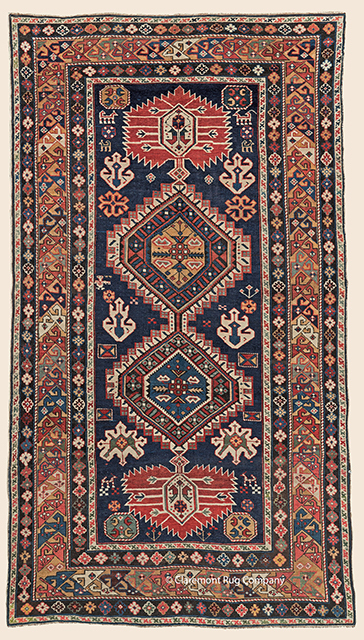 OAKLAND, CA.- Last month Art Daily and Jan David Winitz, founder/president of Claremont Rug Company, began a series of first person narratives and interviews that will discuss a wide range of topics related to the selecting, evaluating and collecting antique Oriental rugs from the Second Golden Age of Persian Weaving, ca. 1800 to ca. 1910.

In this interview, Winitz discusses the immensely diverse world of Caucasian rugs which were produced by 85 distinct weaving groups in an area that is characterized by tribespeople who spoke over 100 languages.

Bordering Iran to the north, the Caucasus Mountains are among the most formidable landscapes in the world. Stretching 400 miles, they contain a dozen peaks higher than the highest in the Alps and are inhabited by approximately 350 tribes.

Against this towering backdrop, many of the tribes were nomads who moved seasonally. Intimately in tune with nature, they had gratitude for everything that provided comfort or beauty, as well as for life itself. Partly as an expression of this deep joy of living and oneness with the earth, many tribes wove rugs of geometric design that demonstrated an intuitive sense of unity within nature. Their daring color combinations have inspired Western artists for centuries.

It is not without reason or forethought that Jan David early on became a recognized global expert on Caucasian rugs.

“When we opened Claremont in 1980, most of our 40-rug collection was comprised of Caucasian pieces,” he remembers. “We have built our global reputation as the master purveyors of rare 19th century Caucasian pieces over the years.”

Caucasian rugs woven in the 19th century possess an individuality unsurpassed in the world of antique Oriental carpets. Currently, the Claremont inventory is comprised of some 2500 rugs, including nearly 200 Caucasian rugs. Equally sought-after are the thick-piled rugs from the more mountainous sub-regions of Kazak, Karabagh and Gendje, all of which have a very strong following among knowledgeable collectors, as well as the more finely knotted, closely cropped Shirvans, Kubas and Bakus of the lowland that descend to the Caspian Sea.
The most coveted Caucasian rugs still available today were hand-woven during the 19th century by the nomadic shepherd families who once dominated the steppes and mountains of modern-day Armenia, Georgia and Azerbaijan. Their signature dye colors are germanium red and indigo blue, and their designs are peppered with symbols of good fortune and playful images of chickens, carnations and diagonal stripes. Much of the imagery is considered sacred, including a fan-like whirling orb that stands for the Wheel of Life.

“I have worked for four decades with one collector, spending 20 years alone to create a Caucasian collection for him that included one world-class example of each of the 85 weaving sub-groups, a pursuit that was highlighted in an article in the Wall Street Journal,” said Winitz. “Like many other serious connoisseurs, I have the privilege to serve, he had been drawn to their artistry and the world view of their weavers.

“It’s no accident,” Winitz explains, “that 19th century Caucasian rugs evoke a decidedly cosmic perspective. The mountainous landscape where the rugs were woven provided the weavers with nightly clear views of the constellations.” The tallest in this range is the extinct volcano, Mount Elbruz at 18,510 feet, with no less than 10 other peaks rising to greater heights than Mont Blanc (15,781 ft.), the highest in Europe.

“The tribespeople had an entirely organic world view, unfiltered by modern science or formal education. They studied the forces of nature firsthand, in great part because their survival depended on it. Throughout, they maintained a sense of wonder,” he reminds.

Working on small portable looms, weavers took ancient designs with deep symbolic meanings and gave them a freshness and spontaneity. The dragon motif, boteh, flowerhead, arabesque, palmette, birds, animals, cloudband and crab designs are all present. Sometimes many of these are found in a single weaving.

Winitz points out that, “At the time the great Caucasian rugs were produced, the weavers, lacking literacy, excelled at pictorial, non-linear thinking, fed in part by nightly storytelling that embodied their collective wisdom, and by a vast body of symbolic patterns that had been handed down, from generation to generation for millennia.”

Caucasian rugs, Winitz believes, connect the disparate tribal Near Eastern and urban-based Western worlds. “I am astonished at the allure of these rugs,” he notes. “They are treasure maps left to us by artisans who lived in harmony with, and whose art was informed by, the natural world.”

To characterize the world as they saw it, the weavers created a myriad of symbols that include Ram’s Horns (a motif dating back to the region’s Bronze Age metalwork), the Wheel of Life (an ancient mandala representing the cyclical nature of the cosmos) and Botehs (a seed-like form representing the ever-present potential for growth), among others. Zigzag border patterns are “running water,” without which life cannot exist.

Over a three-decade period, Winitz had what he terms “the unique privilege” of speaking, at length, with descendants of weavers and tribal elders. “Most of my interpretations of these symbols came through these conversations,” and he adds, “and to my knowledge are not reflected elsewhere in any published research.

“Drawings on cave walls indicate these symbols pre-date organized religion,” Winitz explains. “The layers of imposed meaning compose a powerful, universal, non-verbal language. After studying a particularly enigmatic Caucasian rug, one of my clients, a neurosurgeon, said, “‘This is the result of a healthy mind, free of all the modern neuroses.’”

Experience taught the weavers that outlining sections with grey, blue or red amplified dimensionality and that, given the eye’s propensity to blend colors, the “right” adjacent colors created the illusion of a greater range of hues than were actually there. All of which amplified the visual and emotional impact of their designs. Not coincidentally, in the 1930s, the Bauhaus movement cited Oriental rugs as being central to its color interaction theory.

A limited number of 19th-century Caucasian rugs are spellbinding, while others, more decorative in nature, fit into the High-Collectible and Connoisseur-Caliber levels of his proprietary “Oriental Rug Market Pyramid.”

To live with a high-level Caucasian rug woven in the 1800s is to continually discover new things—shifting motifs, playful variations on themes. A seeming “randomness” that’s far from random: inexactitude that remains grounded by hidden natural laws of balance and harmony; asymmetry that’s vitalizing rather than unsettling. To our benefit, Winitz says, “Their fascinating richness of pattern and color draws our attention, compelling us to slow down.

“Nearly a half-century ago when I first met impassioned collectors, their engagement with Caucasian rugs was already strong, and their following continues to grow today,” Winitz stresses, “and as long as premier examples can be found, they will continue to speak to some of our deepest emotions and our sense of wonder.”

Now, while connoisseurs for decades have recognized the importance of antique Caucasian tribal rugs, these carpets are increasingly being added to private collections as the art world in general has come to appreciate their unique portrayal of nature and the cosmos. 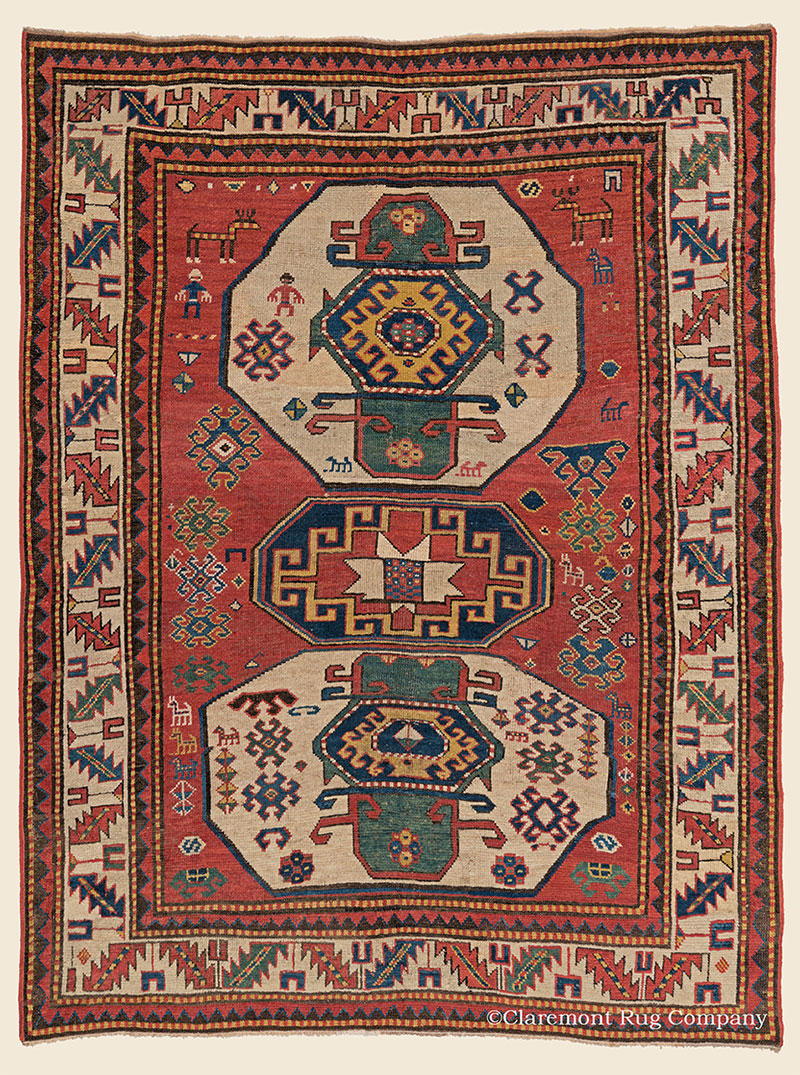 The Caucasian nomads mostly wove area size rugs in dimensions from 3 x 4ft. to 4 ½ x 9ft. for their own daily use, and to satisfy their singular sense of creativity. Accordingly, they invested a level of care into their work which seems incomprehensible today but assures that their legacy will continue to speak to art collectors worldwide.

The colors of the best 19th century Caucasian carpets were produced exclusively from natural materials found in the respective tribal regions, with the deep greens, vibrant yellows and deep rose tones being the most precious. Virtually all Caucasian carpets are made with the symmetrical Turkish knot.

Most older Caucasian antique tribal carpets are “all wool” – not only the knotted pile, but the warp and weft threads are usually made from hand-spun woolen yarn or goat hair. However, one can sometimes find older antique carpets (and, more frequently, in some newer examples) with cotton warps and wefts. Shirvan region Oriental rugs are noted for their wool wrap threads but are made with cotton weft threads and selvedges.

Warp threads can be made of undyed light yarn in one area and dark or mixed in another. Weft threads can be different colors: rusty red/brown, blue, or white, although they are typically red in the Kazak district. The number and colors of selvedges often can be an identifier to the area of origin.

The designs and colors of antique Caucasian rugs are unique for two reasons: tradition (more deeply rooted in Asia than anywhere else) and the inherent geographic isolation.

So often one hears the expression, “vegetable dyes.” This is a misnomer. “Natural dyes” is more appropriate, as not only plants, herbs and roots are used, but minerals, insects and mollusks, as well.

The colors most often seen in naturally dyed antique Caucasian rugs are:

Madder Red: from the root of the madder plant, can vary in shade of selected roots from light-orange-red to deep, rich reds or even to purple reds.

Black: Brown wool dyed with indigo blue produces a lustrous black. A brittle and somewhat corrosive result is produced by the concentration of tannic acid in the bark of the mountain ash, which oxidizes the wool over time.

Brown: Walnut husks and volcanic soil are used to produce brown, which is enhanced by overdyeing in indigo. These dyes also contain tannic acid and will oxidize the wool, creating the common “sculpted” effect of many antique Caucasian rugs. Undyed brown sheep’s wool is also sometimes used.

Indigo: By fermenting the blossoms of the indigo plant, liquor is produced that can be varied to give literally every shade of blue, from powder to midnight indigo. The length of immersion is the key.

Cochineal: The female of the cochineal beetle produces a red dye that is processed by roasting and grinding, an expensive and prized dyestuff.

Green: Deep, clear greens were very difficult and time-consuming to procure, and, when they are seen, are usually considered to be the sign of an especially masterfully dyed antique tribal rug. Most greens are obtained from first dyeing the wool with indigo blue and then overdyeing it with a yellow dyestuff.