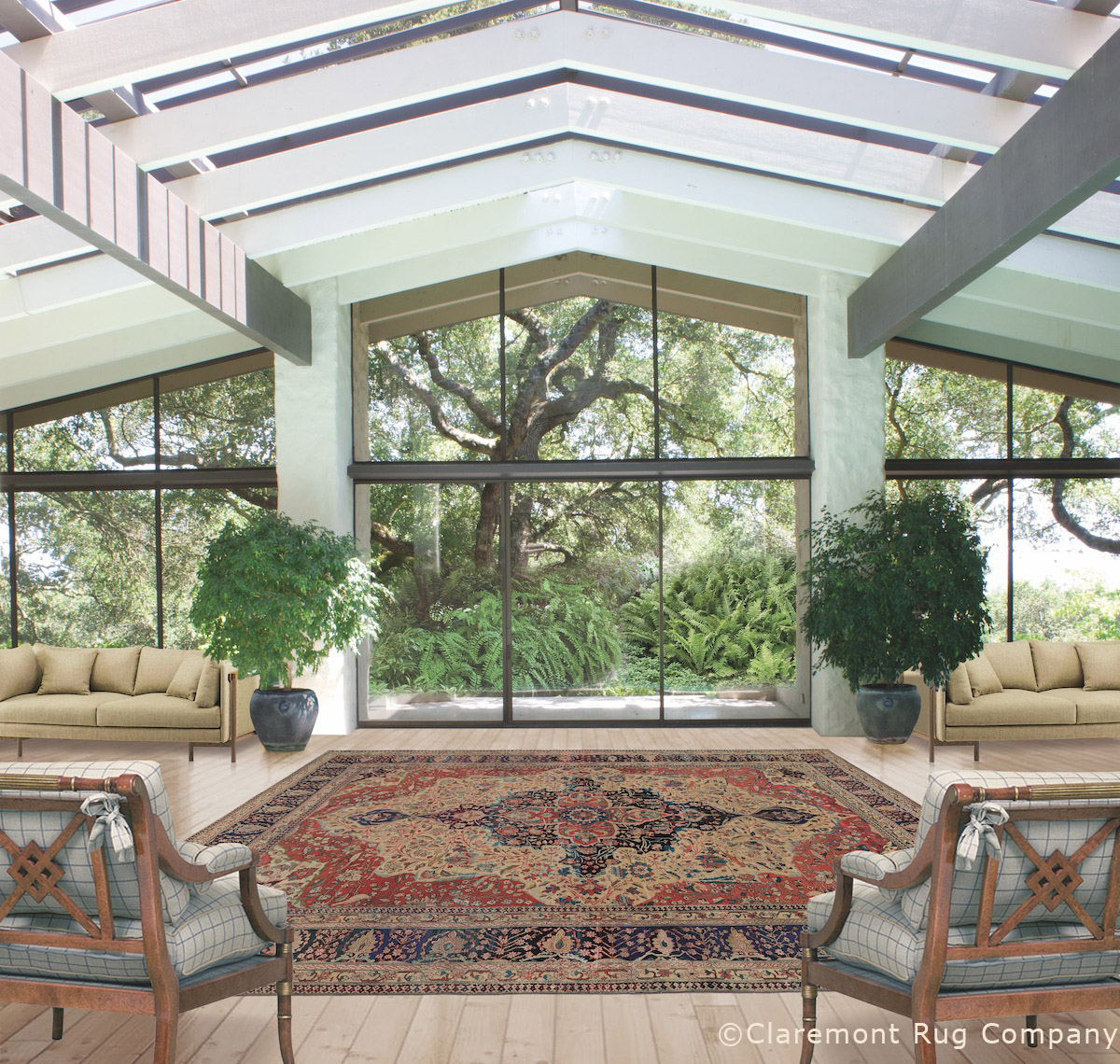 The reception room of an philanthropist, an impassioned second generation antique rug collector, hosts a stunning, particularly bold room-size Mohtasham Kashan as the centerpiece when the space was not in use.

The antique Persian carpet style known as Mohtasham Kashan (Mo-ta-shom) honors the memory of the 19th-century master weaver Hadji Mollah Mohammed Hassan Mohtasham who was, in turn, a descendant — and namesake — of a revered 16th-century Persian poet.

Kashan refers to the Central Persian city where his workshop was located, historically a resort area frequented by the ultra-wealthy and royalty, whose support helped create a center of virtuoso craftsmanship. A German librarian, visiting during the 17th-century, wrote of clay houses built along narrow alleys that were bright with skeins of dyed wool hung out to dry. 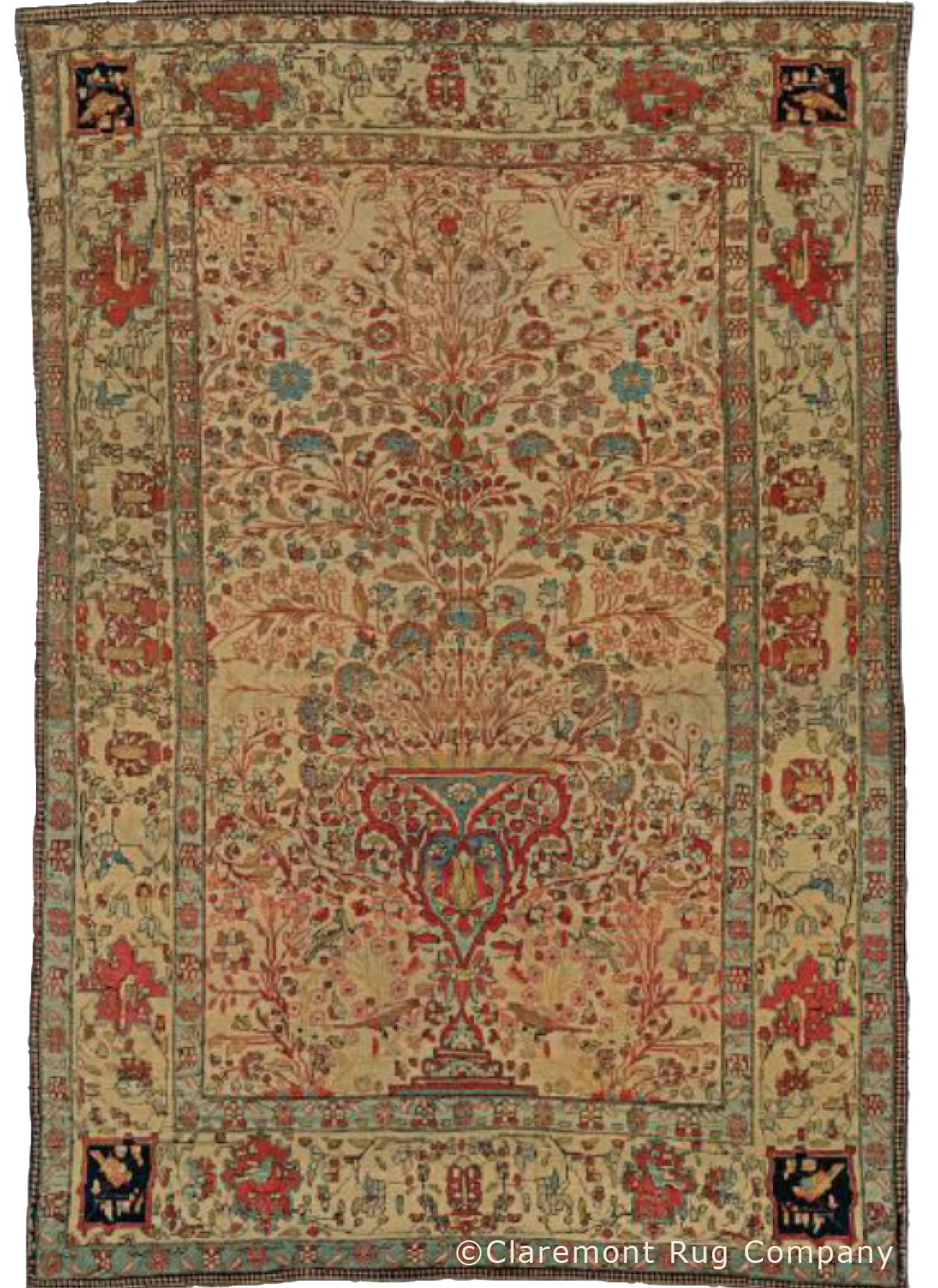 Persian Mohtasham Kashan “Vase Rug”, 4′ 7” x 7′ 1”, mid-19th-century
An almost 200-year-old place woven near the beginning of the Mohtasham period, this rug captures both an ordered, formal scene and nature’s multiplicity of expression with chromatic delicacy and fascinating intentional inexactitude.

It’s highly improbable that Hassan Mohtasham actually invented the weaving style named for him, for according to Claremont Rug Company founder and president Jan David Winitz, extant examples date back to the early 19th-century. Hassan Mohtasham did, though, promote the style, helping to bring it into prominence. 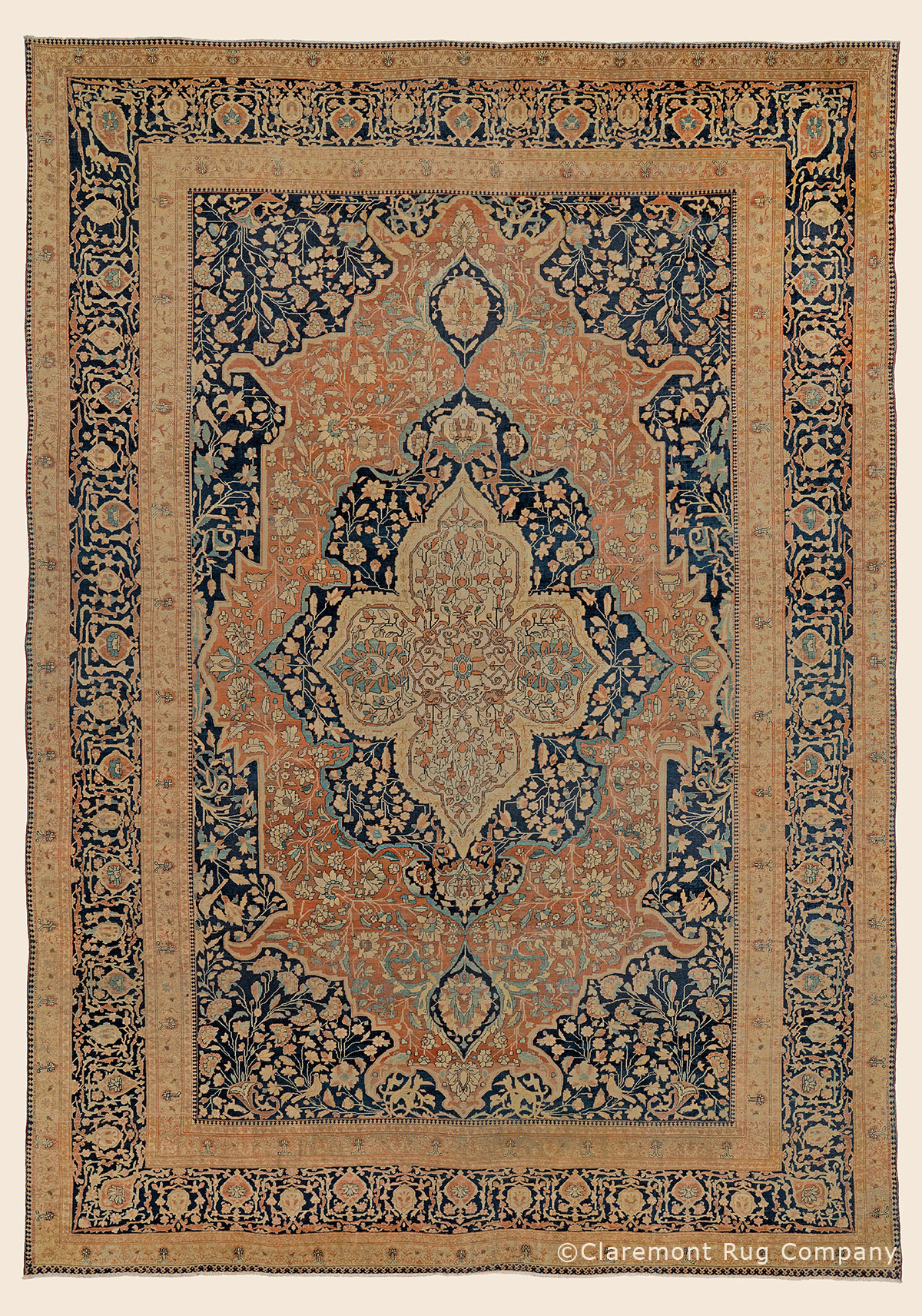 Persian Mohtasham Kashan, 8′ 6” x 11′ 11”, Circa 1850
This is the result of a project that was likely years in the making, a best-of-the-best caliber room-size piece with extraordinarily fine knotting and an inimitable beauty in the drawing of its field. A one-of-a-kind border design reveals three different beaded strands meandering around the center, decorated with hanging ornaments.

And all, whether woven of first-shearing lamb’s wool or silk, Mohtashams are recognized for their exceptionally luminous pile and handkerchief-like touch, known as the rug’s “handle.” In design, the most accomplished pieces offer such a wide exploration of a complex pattern language that they could be compared to a musician’s finest solo.

Perhaps most notable and distinctive are Mohtasham Kashans’ extraordinary density, typically 350 to 400 knots per square inch. “Which means,” Winitz said, “in every square inch, there are 350 to 400 or more minute mosaic tiles that create the design. We are talking about individually hand-tied knots, fashioned from extremely lanolin-rich (thus extremely difficult to work with) yarn, fashioned prior to the invention of automated steel looms— an almost inconceivable feat of manual dexterity.”

Winitz explained that some Mohtashams boast as many as 500 knots per square inch! Consider that a dime measures three-quarters-of-an-inch across. Now imagine the width of that dime comprised of 375 meticulously uniform, nearly microscopic, horizontal knots. Most Mohtashams measure between four-by-six and five-by-seven feet. At the smaller end of that spectrum, a 500-knot-per-square-inch carpet is comprised of a total of 144,000 knots; at the higher end, 210,000. Throw in the time required to shear, card and hand-spin the wool, gather and prepare the plants and herbs to create the dyes, then the actual dyeing, then assembling the loom, and a single carpet represents at least a year of intensive work. 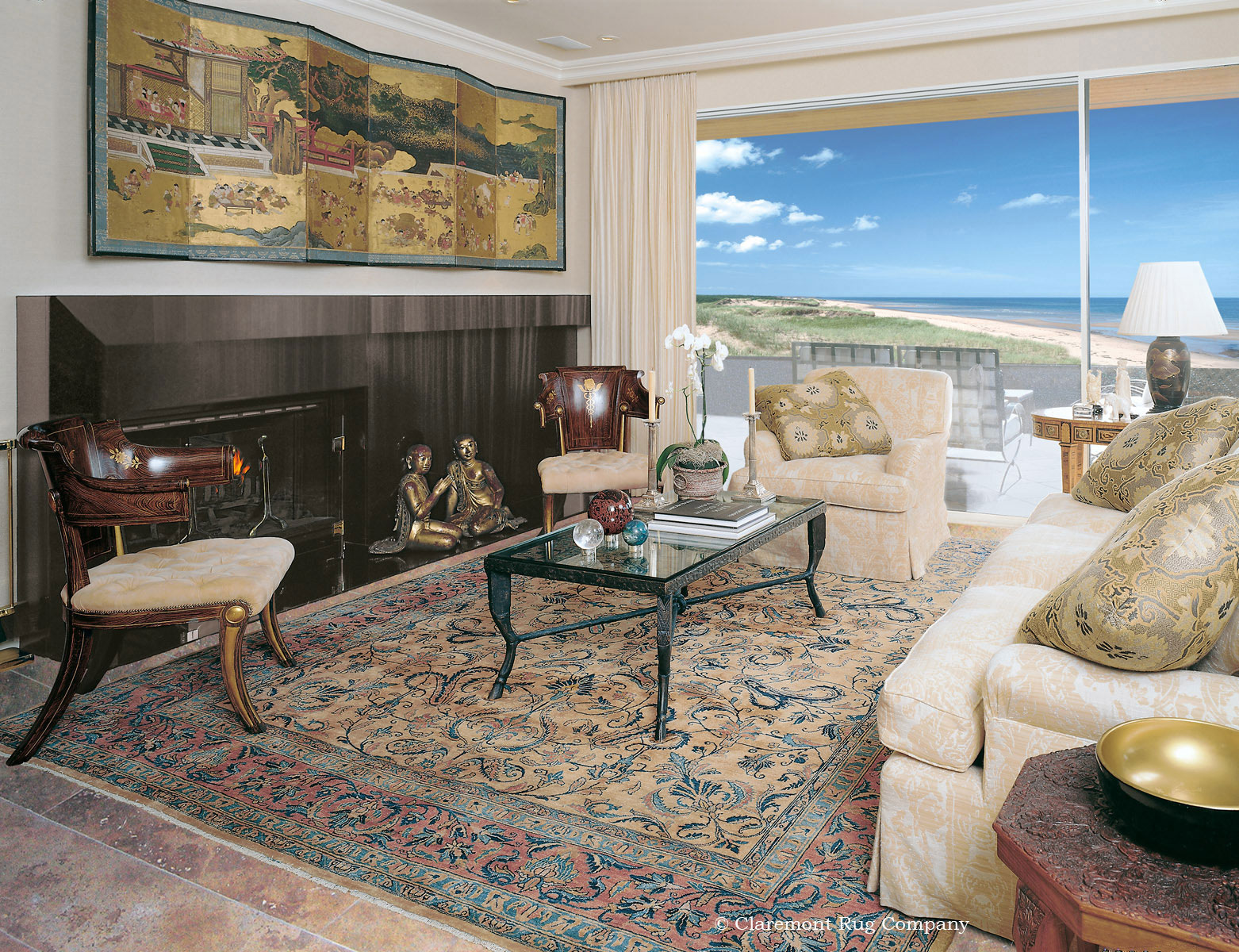 An Asian art and antiques collector found the understated elegance of a late 19th-century Mohtasham Kashan carpet created an incredible graciousness for the contemplative ambiance of this seaside sitting room.

It’s that density that allowed for such extraordinarily precise and meticulous, petit point detail that Winitz calls, “drawn” because it looks more hand-sketched tha woven. Thin, black outlines, as delicate as those made by the finest pen nib, outline a multitude of shapes, large and small. Mohtasham Kashans are noted for their complex spiral arabesques. Their weavers’ ability to create graceful, swirling lines with lyrical naturalism is unprecedented. And as with all categories of High-Collectible Oriental rugs and carpets, they exhibit a particularly artful use of color.

While some Mohtashans gain visual impact by contrasting richly saturated reds (derived from madder root or cochineal) with deep midnight blues (from indigo), many lean toward softer, pastel tones, including greens, that were difficult to achieve given that there were no direct natural dye source for the color. And yet, by overdyeing indigo with yellows (onionskin, chamomile), Kashan’s dye masters, who Winitz stressed “are more akin to chemists” managed to create delicate celadons, apple greens, mint greens, and pale turquoise. Stunning subtleties were achieved with other colors, too. Some of the finest Mohtashan carpets that have come down to us announce that mastery in spectacular, yet subtle, fashion: a flesh-toned field augmented with a range of creamy, sorbet-like apricots and corals. 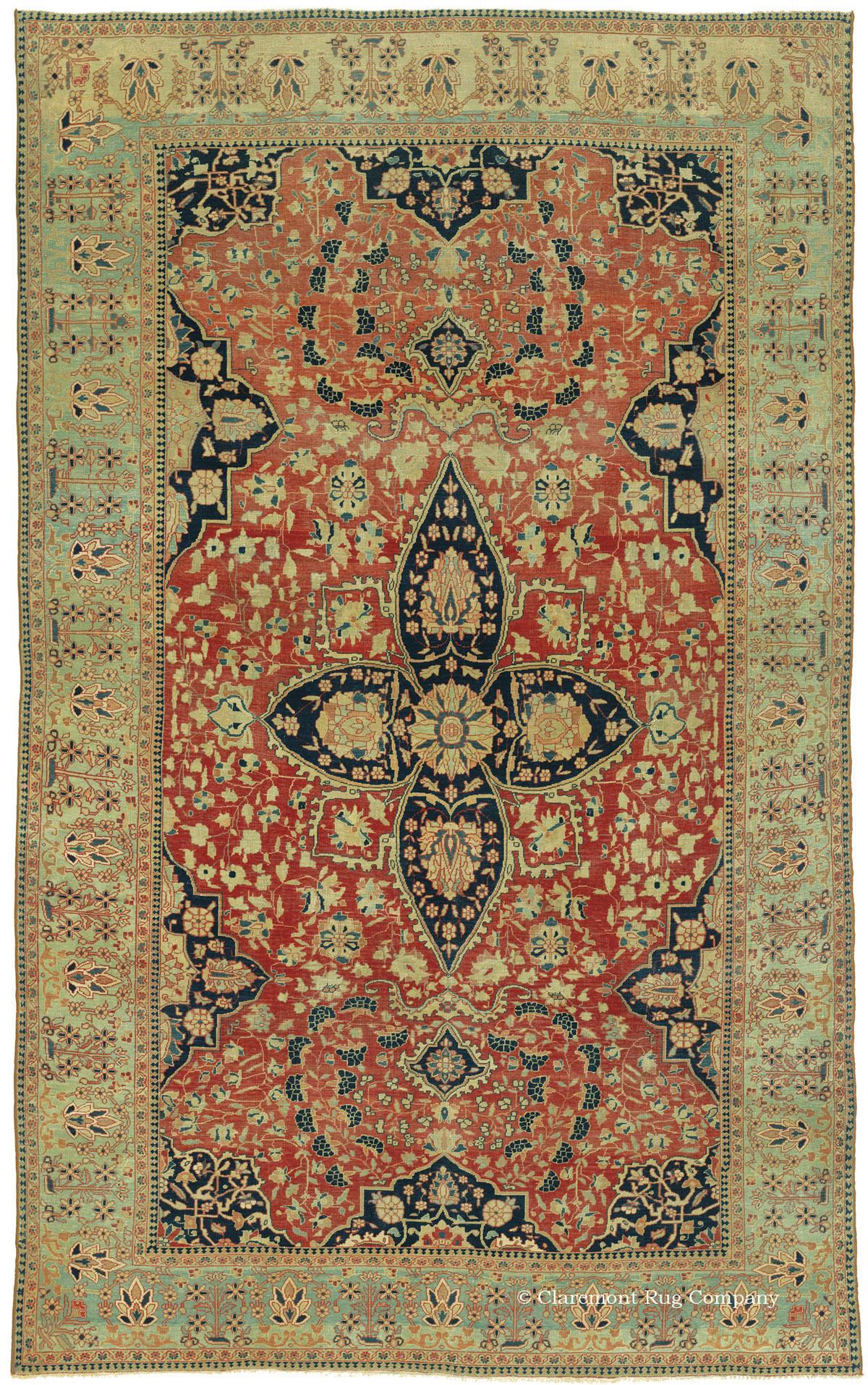 Persian Mohtasham Kashan 4′ 4” x 6′ 11”, Circa 1850
Entirely singular in design, this extraordinarily crafted medallion carpet eschews the traditional corner spandrels introducing various half-revealed attendant medallions that appear to be existing on a plane beyond the border, floating on a flower strewn ground. A magical celadon to aquamarine border of great delicacy frames this scene.

Taken together, these images suggest an animated film. There’s a great temptation to luxuriate in their company with a magnifying glass in hand.

Another aspect of the Mohtasham palette is abrash (the Farsi word for “cloud”), the use of striations within a particular color, most often blue (powder blue, sky blue, cornflower blue). This technique, which may have had an unintentional start due to early weavers working with small, differing, seasonal dye batches, is all the more remarkable for having been transformed, early on, into an art form of its own, one that brings almost three-dimensional depth to two-dimensional surfaces. Its use, in combination with exceedingly compact knots, results in as many as twenty tones or shades within the space of a child’s hand.

Noteworthy, Mohtashams continued to be made into the 1920’s. One particularly spectacular silk rug, created in 1921 in shades of beige and gold, incorporated large swathes of calligraphic verses by the medieval Persian poet Sa’adi into its borders and a central motif of enormous birds of paradise. But by the 1930s, commercial pressure led to duplicates (unheard of in 19th-century pieces), and European influence introduced chrome and aniline dyes that quickly superseded traditional vegetable dye baths. 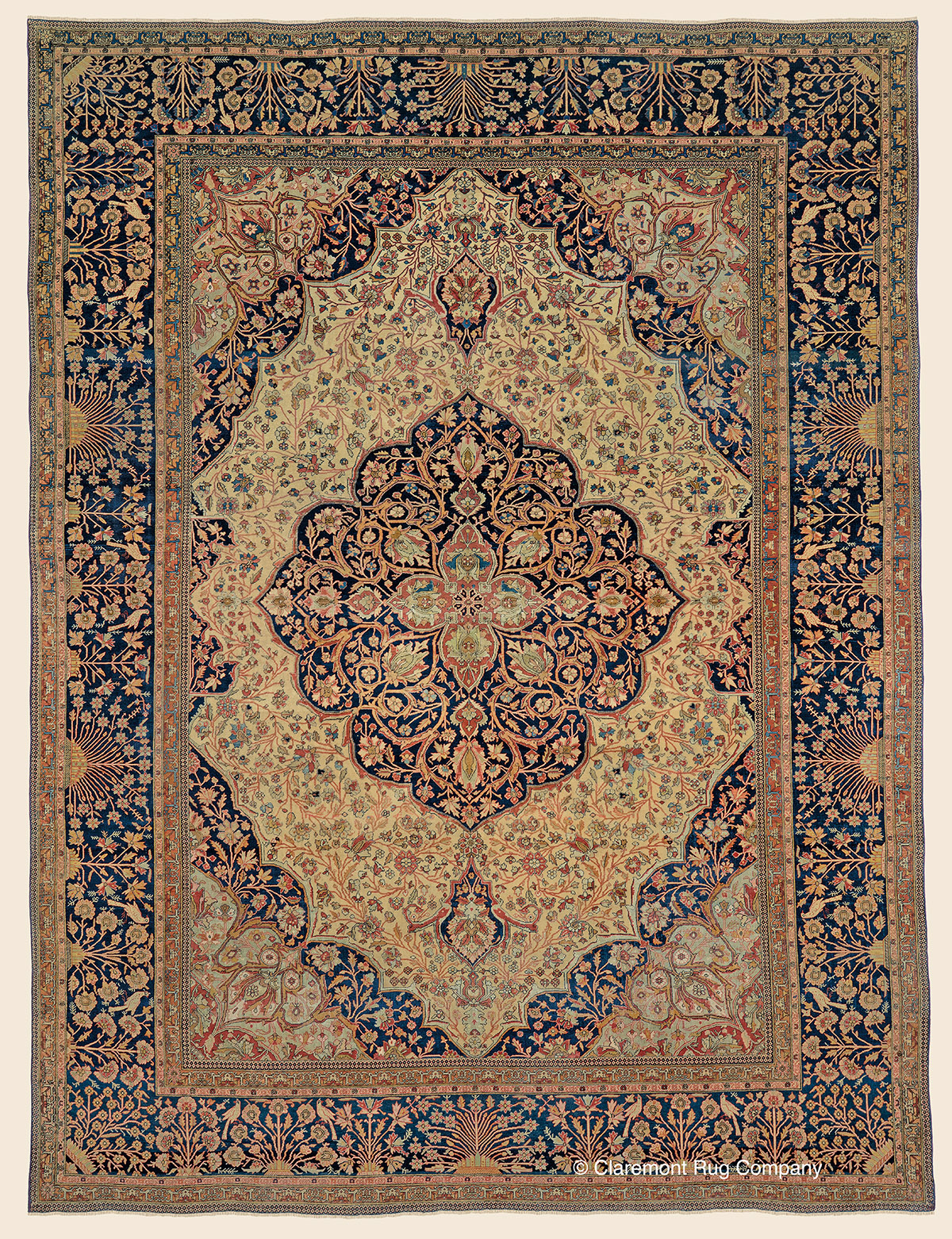 That said, the rarest and most sought-after — what Winitz terms “the high-collectibles” — remain the “early” pieces, those created between the second quarter 19th-century to the 1880s. These virtuoso pieces are significantly finer, thinner and more flexible than those that followed, and the wool cut closer to the knots, another reason why the design details emerge so cleanly and sharply. Even the tapestry-like, nearly pixelated backsides of these rugs are exquisite.

That they were created at least a century after (but were very much informed by) the so-called “Golden Age of Persian Weaving” during the rule of the Safavid dynasty (also a golden age of Persian ceramics, miniatures and embroideries) is all the more noteworthy, considering that Kashan’s 19th-century weavers were no longer supported by Safavid Court funding, as they had been during the 16th and 17th-centuries. 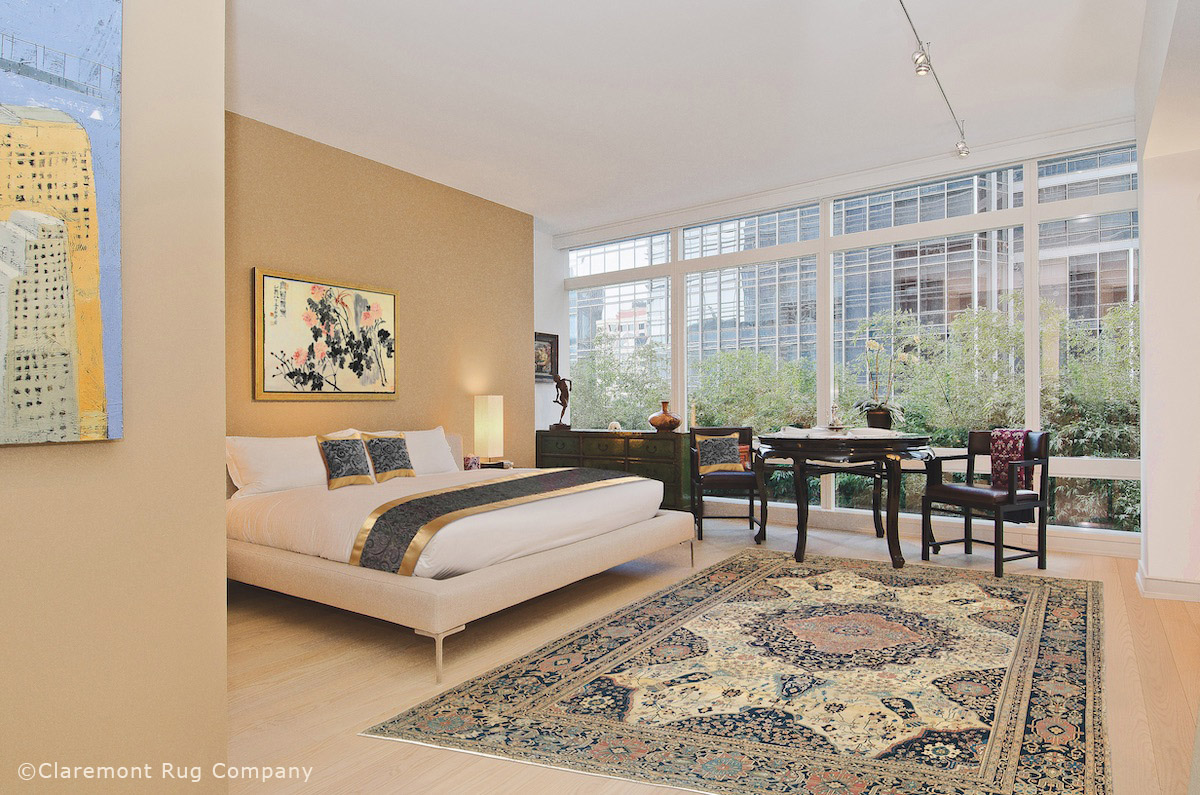 In 1987, Christie’s sold an 8′ x 10′ Mohtasham Kashan for just under $19,000 US. In 2004, a larger piece (just under 14′ x 23′) went under the auction hammer for $287,500 US., setting a world record. “Its celadon, green-eau de nil ground color,” wrote Hali Magazine (the international publication for carpet and textile scholarship), “made the blooms look like Monet water lilies on a dreamlike pool.” Winitz said, “Given its size and condition, the price could almost be considered a bargain today.” The record was broken again in 2010 — $345,645 US for a “tour-de-force” 8×10-footer, made during Hassan Mohtasham’s tenure and bearing an inscription cartouche immortalizing the rug’s commissioner, a local Kashan merchant.

Still, the creme de la creme rarely come to market; since 2005, only a handful of these have appeared in major auction houses. Because Winitz consistently, and strategically, purchases long-held family collections, some amassed over generations, Claremont has acquired many extraordinary examples. During their 39 years in business, a total of over 200 of what is considered, by the cognoscenti, to be the most technically advanced of all 19th-century weavings, have passed through Claremont’s doors. This number points to a significantly larger output than could have been achieved by the single-family, two-generation workshop of Mohtasham and his son. 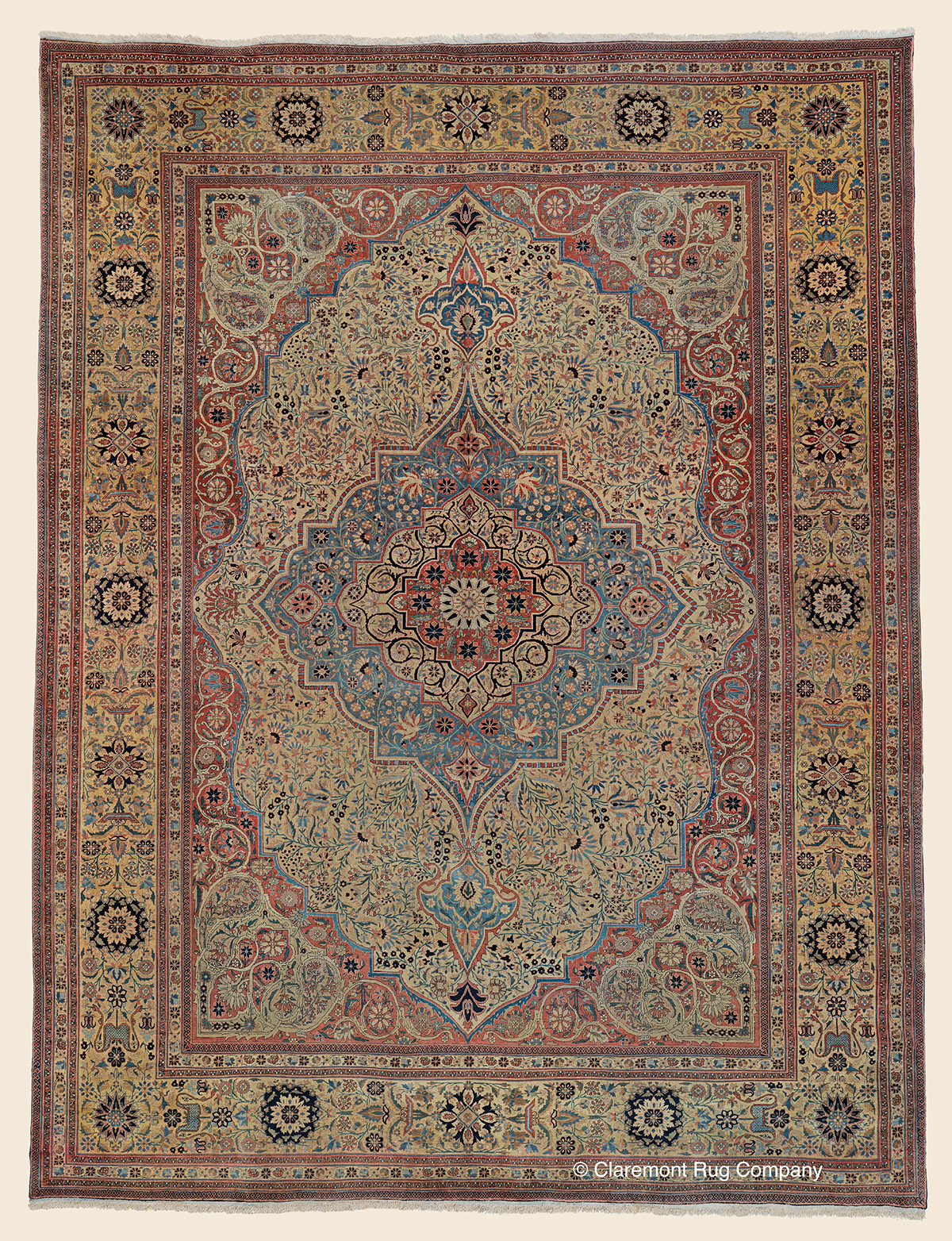 Persian Mohtasham Kashan, 10′ 5” x 13′ 10”, Circa 1875
Exemplifying the awe-inspiring combination of elegance and precision of the quintessential Persian city carpet, this oversize masterpiece with its wondrous spectrum of myriad details and sublime palette is a supreme achievement.

There is some talk within the rug market about ‘signed’ Mohtashams– meaning the workshop’s name is woven in calligraphy into borders or cartouches. This was likely done to capitalize on the Mohtasham family name which, in turn, drew gravitas from a revered, 16th-century Persian religious poet of the same name whose mausoleum still stands in Kashan today. But the signed pieces are, explains Winitz, “the rare exception, not the rule, and not necessarily the most artistically accomplished pieces. Anonymity was considered an act of humility before one’s Creator and the cosmic force that blessed the weavers and dyers with the ability to create objects of such beauty and harmony.”

It’s impossible to know how many Kashans were made in the Mohtasham style, but with or without a signature, they embody an extraordinary moment in the entire world history of rug weaving. They are the carpets of choice for many seasoned connoisseurs— people who appreciate that yesterday’s masterpieces both have the power to transform today’s homes and appreciate them as viable art investments. “There are a lot of unknowns about Mohtashams,” adds Christine Hunt Winitz, who operated Claremont with her husband, “but at the end of the day, the rugs’ spectacular artistry speaks for itself.” 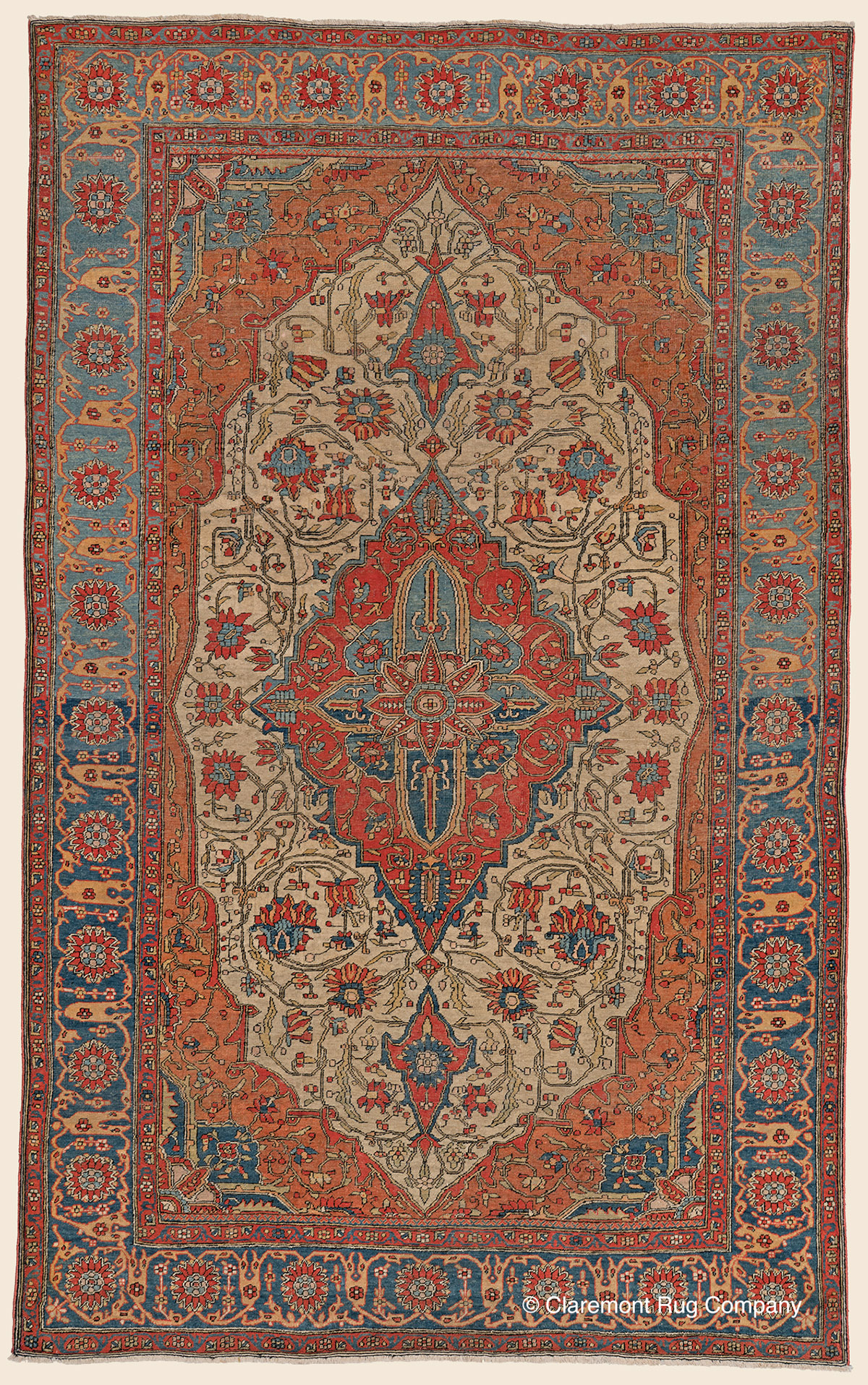 Persian Mohtasham Kashan, 4′ 4” x 7′ 0”, Circa 1850
Antique Persian Mohtasham carpets as a whole reflect an incredibly wide range of artistic exploration. While many offer colorful fields of densely configured blossoms, this brilliant example emphasizes the larger color zones themselves, with complementary shifting tones of oranges and blues that combine to mesmerizing effect.

Three of Claremont’s clients have assembled collections of 30-45 Mohtasham examples. “Each of my Mohtashams is a world unto itself,” said one, “a world I study endlessly.” Another client, who had previously focused on tribal rugs, wrote to Winitz of his excitement after having included a circa 1875 room-size Mohtasham into the mix. “Walking around the house, I always alter my course to pass by this incredible work of art.”

“Only poets could have designed it,” observed Mercedes Palau-Ribes, a veteran, Madrid-based art historian, more familiar with 19th-century paintings, who was recently shown her first Mohtasham Kashan. “And only angels could have woven it.”