The Best of the Best Antique Rugs Sold in 2014

A total of 40 world-class antique rugs in a variety of Persian and Caucasian weaving styles are on display. The limited-time exhibition is accessible on the Claremont Rug Company website throughout January 2015. 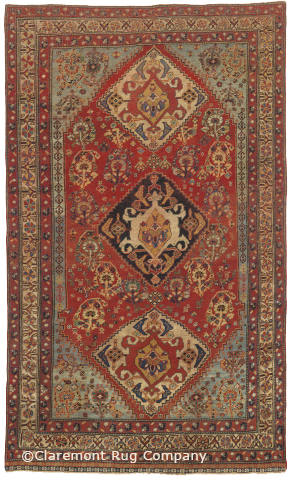 This 19th-century Shishboluki rug was one of the “40 best” carpets sold in 2104 displayed in the Claremont Rug Company online exhibition.

“The response from our clients as well as the art and antique collecting communities to our first three exhibits was tremendous,” said Winitz, author of “The Guide to Purchasing an Oriental Rug.” He noted that clients and connoisseurs from more than 55 countries had viewed the event last year.

“The ‘Best of the Best Rugs Sold in 2014’ online event contains rugs from 23 weaving groups, all of which present extremely innovative pattern language and exotic dyes, many of which came from natural dye recipes that have now been lost,” said Winitz. The prized weaving styles that contain the most entries are Caucasian rugs (10 pieces) and Persian Bakshaish rugs (seven pieces).

He also noted that all of the rugs in the exhibit are either “museum-level” or “high-collectible,” the second tier of Claremont’s proprietary six-tier Rug Pyramid©,  which classifies rugs by their rarity and collectability as fine art and antiques.

Founded by Winitz in 1980, Claremont Rug Company‘s inventory is comprised of art-level Oriental rugs acquired privately by the Gallery through its extensive team of buyers. ”We have unprecedented access to rugs from long-established private rug collections through our extensive global network of buyer/collectors who seek out rugs of great beauty and provenance. 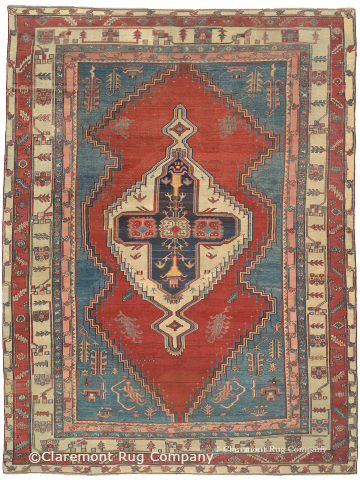 Early 19th-century 8-2 X 10-10 Persian Bakshaish was chosen as one of the best 40 rugs sold by Claremont Rug Company in 2014 and is available to be seen in a current online exhibition.

“The rugs chosen are at the pinnacle of their respective weaving groups,” Winitz said, “and are in superb condition relative to their 140 to over 200 years of age. Many have never been seen outside the private collections where they resided.”

He said that many of the rugs in Claremont’s best of the best web exhibition “would undoubtedly have appeared in the rug literature” had they not been in private collections for up to four generations. Rugs of particular note are:

“With clients on five continents many of whom have lifestyles that seldom allow them to visit our San Francisco area gallery in person, our website and our online exhibitions are a tremendous asset,” he said.

The Claremont inventory is comprised of nearly 4000 Oriental rugs, all from the Second Golden Age and nearly all of which are in the second, third and fourth tiers of the Pyramid. Individual rugs are valued from $20,000 to more than $500,000 per carpet. The exhibition will run online, Jan.16/March 22, 2015.

Rugs from the second tier of the pyramid are extremely rare. First tier rugs are almost exclusively held by museums or royal families and only come to market, via auction, occasionally. “For an art or antique collector, rugs in the second tier are those which seasoned connoisseurs acquire for display as wall art or for their own private collections,” said Winitz. “Because of this, our annual exhibition of the ‘Best of the Best’ is tantamount to an intimate tour of the personal choices of great collectors.”