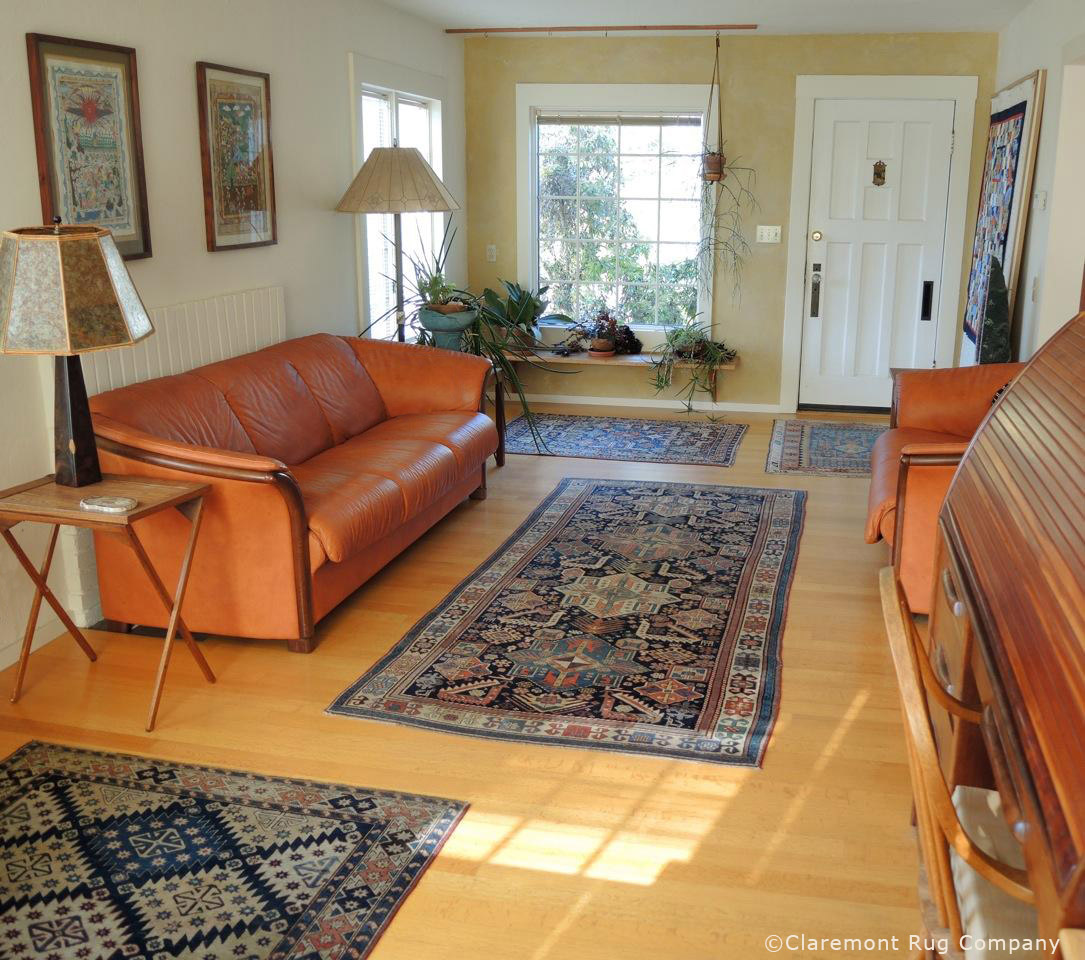 Fine examples of some of the 85 sub-styles of antique Caucasian rugs are lovingly displayed throughout this collector’s home.

OAKLAND, CA.- While connoisseurs for decades have recognized the importance of antique tribal rugs woven in the Caucasus Mountains, these carpets are increasingly being added to private collections as the art world in general has come to appreciate their unique portrayal of nature and the cosmos.

Bordering Iran to the North, the Caucasus Mountains are among the most formidable landscapes in the world. Stretching 400 miles, they contain a dozen peaks higher than the highest in the Alps. Inhabited by approximately 350 tribes, linguists suggest that there may have been as many as over 150 distinct languages spoken in the region.

Against this towering backdrop, many of the tribes of the area were primarily nomads who lived in almost continuous physical activity. Moving seasonally, they were intimately in tune with nature, learning to have gratitude for everything that provided comfort or beauty, as well as for life itself. Partly as an expression of this deep joy of living and working close to the earth, many tribes wove rugs of geometric design that demonstrated their intuitive sense of unity within nature. Their daring color combinations have been marveled at and studied by Western artists for centuries. Nineteenth century Caucasian rugs possess an individuality that is unsurpassed in the world of antique Oriental carpets. 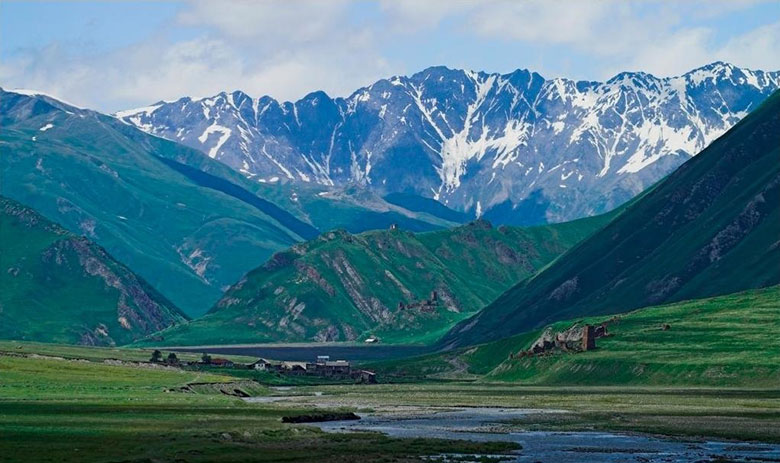 Home to 350 tribes, the Caucasus Mountains provided weavers
much inspiration to express their experience of the natural world.
Since its founding by Jan David Winitz in 1980, Claremont Rug Company has maintained an expansive collection of exquisite 19th-century Caucasian art rugs.

“When we opened Claremont, most of our 40-rug collection was comprised of Caucasian pieces,” said Winitz. “We have built our global reputation as the master purveyors of the best of the 19th century Caucasian pieces over the years.” Claremont maintains an inventory of some 2500 rugs, all woven during the Second Golden Age of Persian Weaving, ca. 1800 to ca. 1910. “Today, we are privileged to place these remarkable rugs with an international clientele as far reaching as Australia and Chile.”

The Caucasus region has 85 weaving sub-groups. Among the most sought-after styles, according to Winitz, are finely knotted Kubas, Shirvans and Daghestans from the lower slopes descending toward the Caspian Sea. The thick-piled rugs from the more mountainous sub-regions of Kazak, Karabagh and Gendje have a very strong following as well.

“I have worked for four decades with one collector, spending at least 20 years creating a Caucasian collection for him that included one world-class example of each of the 85 weaving sub-groups, a pursuit that was highlighted in an article in the Wall Street Journal,” said Winitz.

Working on small portable looms, weavers took ancient designs with deep symbolic meanings and gave them a freshness and spontaneity. The dragon motif, boteh, flowerhead, arabesque, palmette, birds, animals, cloudband and crab designs are all present. Sometimes many of these are found in a single weaving. Among powerful geometrical diamonds, a tiny horse, dog or gazelle can be found.

The Caucasian nomads mostly wove area size rugs in dimensions from 3 x 4ft. to 4 ½ x 9ft. for their own daily use, and to satisfy their singular sense of creativity. Accordingly, they invested a level of care into their work which seems incomprehensible today but assures that their legacy will continue to speak to art collectors world-wide. 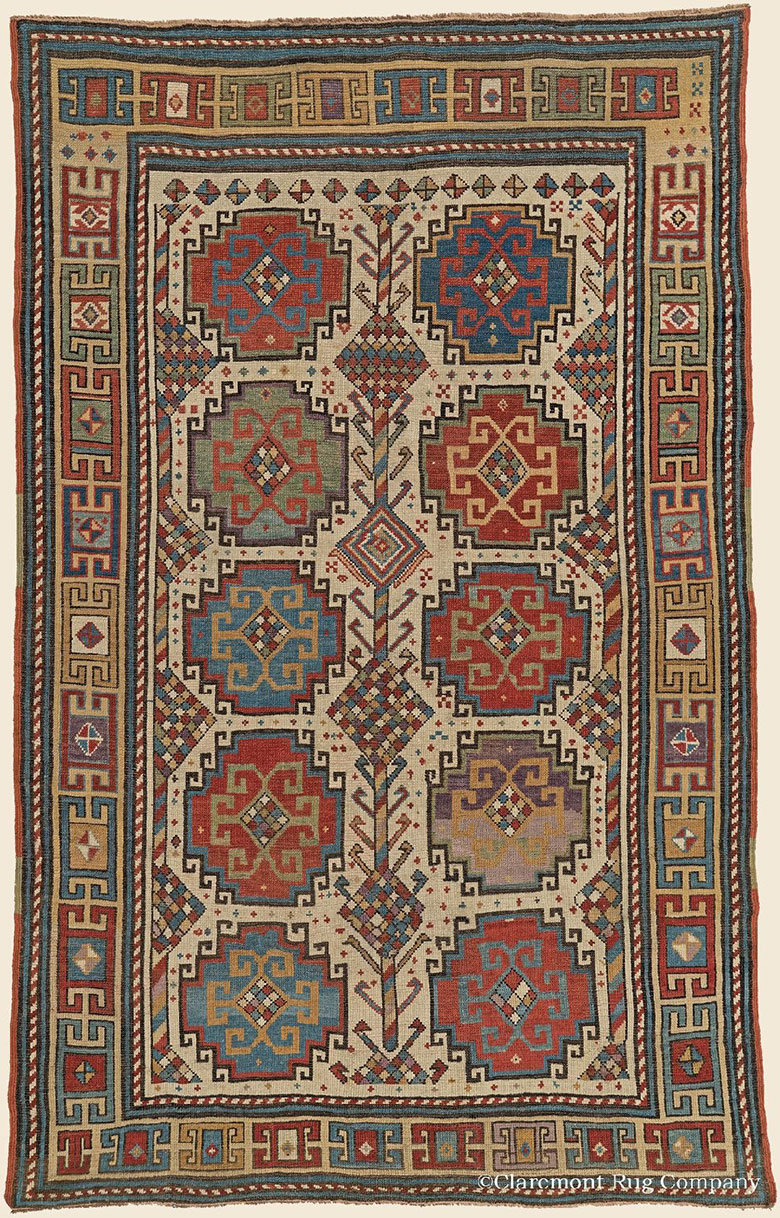