Some of the most coveted masterpieces now are the ones on the floor. The race for the world’s top rug collection. 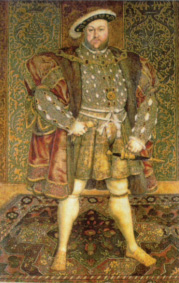 The monarch owned hundreds of Turkish rugs, including this ‘Star’ Ushak capture in a portrait by Hans Holbein.

A leaf-patterned blue rug from the courtly heyday of 17th-century Iran sold at Christie’s this spring for $9.6 million, 20 times its asking price and the highest price ever paid for a rug. Several months earlier, Sotheby’s sold a rug from the late 1500s for $4.3 million, the going rate for a top sculpture by Alexander Calder.

Oriental rugs, once the obsession of Ottoman sultans, European nobles and American robber barons, rarely topped $2 million a decade ago. Now, these centuries-old carpets from Turkey, Iran, and the Caucasus are commanding sums more often reserved for masterpiece paintings than floor coverings.

A patchwork of global collectors and institutions are fueling the rise. New museums across the Middle East and Europe are driving up prices as they build collections of Islamic art. Contemporary-art buyers from Singapore to the Silicon Valley are rolling out antique rugs to complement the abstract, geometric art works that hang on their walls. And everyone is on the lookout for the next little-noticed niche of the market that could see a spike in value.

As the global art market recovers, collectors are once again scouring the marketplace for new areas to exploit. Pastoral landscapes and gilded table clocks-antiques that once would have been too stuffy for high-spending art collectors-have emerged as some of the market’s newest favorites. Buyers who bid up trendy contemporary art works during the boom only to see them plummet in value during the recession are seeking out more obscure pieces whose values could rise with an overall market upswing.

Rugs are typically classified by the circumstances in which they were made-hand-woven by tribal nomads, crafted in a village or city, or woven on looms in a royal workshop and prices tend to rise along the same lines, according to Jon Thompson, a British rug scholar. Those woven by tribes or in villages are on the lower end of the scale, commanding prices anywhere from $2,500 to $300,000. Persian court rugs made in royal workshops during the 15th and 16th-centuries and featuring pastel, botanical designs, are particularly popular with collectors of Impressionist art, and their prices have been soaring into the millions.

The wealthy have collected Oriental rugs for centuries. Henry VIII owned several hundred Turkish rugs. Hans Holbein, Cornelius Vanderbilt and Sigmund Freud, who kept a rug draped over the couch where he conducted his psychoanalytic sessions, were Persianrug aficionados.

These days, top antique rugs are sold more like works of art than pieces of décor. Some high-end rug dealers even eschew the retail system of pricing by the square foot, because their collectors will pay higher prices for small prayer rugs and rare rug fragments than for palatial floor coverings. In recent months, sales have been slower for pieces that are frayed or of mediocre quality, but values have climbed sharply for the best surviving examples, according to appraisers and auction records. 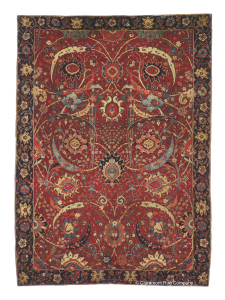 A leaf-patterned blue rug from the courtly heyday of 17th-century Iran sold at Christie’s this spring for $9.6 million, 20 times its asking price and the highest price ever paid for a rug. Several months earlier, Sotheby’s sold a rug from the late 1500s for $4.3 million, the going rate for a top sculpture by Alexander Calder.

Many buyers of modern art like television producer Douglas Cramer, a founder of the Los Angeles Museum of Contemporary Art, are turning to tribal rugs speckled with jewel-toned, geometric shapes. Chicago real-estate developer Ron Benach, who owns pieces by Willem de Kooning and Gerard Richter, is also a rug collector.

The Race For the World’s Top Rug Collection.

Jon Schreiber, a 56-year-old medical-equipment investor from Oakland, Calif., is on a quest to amass the world’s best collection of antique tribal rugs. For the past three decades, he’s been tracking down rugs woven two centuries ago by the 85 nomadic groups listed in a 1981 landmark study of weavers from the Caucasus, a craggy region between the Black and Caspian seas. So far, Mr. Schreiber has paid up to $225,000 apiece for 84 museum-quality varieties that represent each of the region’s tribes or rug styles. His hunt for the lone holdout–a rug representing the 85th style called the Pinwheel Kazak–is intensifying.

Curators at Washington’s Textile Museum say few rug collectors have ever come close to achieving Mr. Schreiber’s goal of finding a top example representing every Caucasian rug in the canon, so to speak. The museum’s founder, George Hewitt Myers, spent much of the early 1900s collecting Caucasian rugs and found fewer than 85 types, says curator Sumru Belger Krody. New York’s Metropolitan Museum of Art has gathered 48 varieties from the region and Boston’s Museum of Fine Arts has around 20 Caucasian rugs.

Word of Mr. Schreiber’s quest has already spread to a few of the country’s rug cognoscenti. Mark Hopkins, a collector in Lincoln, Mass., praises Mr. Schreiber for focusing on a worthy niche but criticizes his comprehensive focus as “stamp collecting”–an approach that’s based on numerical obsession as much as artistic appreciation. Kurt Munkacsi, past president of New York’s Hajji Baba Club, says he tried to amass a similar set of Turkmen tribal rugs years ago before deciding the task was “impossible.”

“In this world, there are lumpers and splitters–people who are fine with finding important overall pieces and people who try to identify every subgroup imaginable, like they’re botanists looking for new plant species,” Mr. Munkacsi said. “I’m a lumper. Mr. Schreiber is a splitter.”

Mr. Schreiber, in turn, says some collectors give up too soon, but he’s “willing to compete for what I want.”

A lanky man with shaggy gray hair, Mr. Schreiber pays little attention to the volatile swings of the contemporary art market. Instead, he has learned to navigate an eclectic subculture where brand names are valued less than silky wool or rare natural dyes. Rug collectors often meet in groups like the Hajji Baba Club in New York, but Mr. Schreiber has mostly shopped solo, relying on a network of global buyers to scour and trade for pieces on his wish list. So far, he’s spent at least $2 million on his pursuit of Caucasian rugs.

When his dealer, Jan David Winitz, President of Claremont Rug Company, stopped by for a visit earlier this month, the two men padded around Mr. Schreiber’s unassuming three-bedroom home in stocking feet because nearly every inch of every room was covered in rugs made before the Civil War. A rug estimated at $18,000 lay on the bedroom floor of Mr. Schreiber’s 13-year-old son. Others hung on the walls like tapestry, their colorful patterns depicting everything from peacocks to pixel-like symbols reminiscent of hieroglyphics and Atari video games.

Mr. Winitz joked about the paucity of furniture in the living room, but Mr. Schreiber just shrugged: “I like to roll out different pieces all the time, and furniture gets in the way.”

Like Scottish tartans or Navajo blankets, antique rugs offer clues about the lives and folklore of ancient peoples Archaeologists in 1949 discovered a carpet in a frozen Siberian tomb that dated to the 4th or 5th-centuries B.C. A culture of weavers eventually stretched from Indonesia to Istanbul. Most weavers were women who could spend months or years creating a single piece for their families or the marketplace. Ottoman rulers built elaborate rug workshops as well, with workers who created purple and pink dyes by pulverizing sea snails and cochineal insects, respectively. 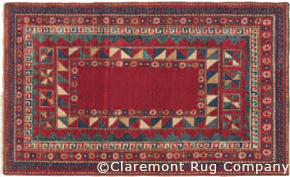 Aristocratic collectors have long acquired the rugs created in Persian-rug workshops, but Caucasian rugs made by tribal groups have steadily gained favor with collectors since the 1960s, particularly in America, Italy and Germany. The most coveted Caucasian rugs were hand-woven during the 18th and 19th-centuries by the dozens of nomadic shepherd families who once dominated the steppes and mountains of modern day Armenia, Georgia and Azerbaijan. Their signature dye colors are germanium red and indigo blue, and their designs are peppered with good-luck symbols and playful images of chickens, carnations, and diagonal stripes. Some imagery is sacred, including a fan-like whirling orb that stands for the wheel of life.

In July 2007, an anonymous collector paid Philadelphia auction house Freeman’s $341,625 for a 5-foot-wide Caucasian rug called an Eagle Kazak. It was only priced to sell for up to $25,000.

Collectors often shy from Caucasian rugs woven after 1900 because assimilation and the Soviet conquest of the region took a toll on the quality of nomadic life and their rugs’ craftsmanship, said William Robinson, head of Christie’s rug department.

Growing up in New York, Mr. Schreiber was enthralled by the images and colors that popped from the six Caucasian rugs his grandmother brought with her from the family’s homeland in Germany. While studying medicine in college in Jerusalem, he befriended a curator at the L.A. Mayer Museum for Islamic Art and became equally smitten with Persian and Turkish rug motifs. By the time he settled outside the hills of San Francisco in 1977, a bohemian aesthetic was popular and he began to buy antique rugs of all styles and designations, from Bidjar to Laver.

He didn’t hit upon the idea of acquiring a complete Caucasian roster until the early 1990s when he realized he already had 25 varieties of Kazaks, Kubas, and Shirvan Bakus. Mr. Winitz offered to draw up a checklist and offer him any “blanks” he came across over time.

Mr. Winitz initially considered the idea an intellectual (and commercial) lark, but the hunting got harder eight years ago once Mr. Schreiber crossed the 60-number mark, he said. Some Caucasian groups like the Karabagh near the southern border of modern day Iran sold rugs to outsiders by the dozen, but only one town in the Shirvan district ever made rugs featuring fan-tailed birds, called Akstafas, by which their rarer rugs are now known.

Mr. Winitz turned to his network of buyers in Milan, Munich and Istanbul. After three years of diplomatic cajoling, he got a Chicago collector to trade a 17th-century Turkish fragment for No. 82, a rug known as the Cloudband Kazak.

No. 83, a creamy Marasali Shirvan dotted with shapes that look like seed pods, came from Mr. Winitz’s own collection, and No. 84, a Star Kazak, arrived three years ago when a South African collector decided to trade it for a Turkish rug fragment he offered him, Mr. Winitiz said. Since then, no hits.

Mr. Schreiber still needs the Pinwheel Kazak, a rug distinguished by a central swirling four-pointed star shape. The Kazaks who once lived near the Georgian capital of Tbilisi popularized the Pinwheel style in the 1800s, according to Ian Bennett’s book “Oriental Rugs,” the 1981 study that’s served as Mr. Schreiber’s collecting framework.

Mr. Winitz says he knows of only six “great ones” in private hands–two in Germany, two in Italy and two in America. He says the two American owners won’t budge–his buyers have asked–so he’s brainstorming ways to win over the Europeans. It’s futile to trek into the mountain regions and scour for it directly, he says, because the Kazaks who are still there sold off their best antiques right after the Cold War and no longer do much weaving.

Mr. Schreiber says he’s imagined the euphoria he will feel upon completing his Caucasian set. He might exhibit them; he might not. His children enjoy his collection, but he’s not sure they’ll keep the set intact over the long term.

In the meantime, he’s adopted a coping mechanism that all hard-core collectors seem to share: a distraction collection. “Runners,” he said, pointing the swelling pile of narrow rugs splayed down his hallway. “I’m collecting them like mad right now.”