You are here: Home1 / Blog2 / PRESS3 / Financial Times4 / Treasures You Purchase to Hold On to

Treasures You Purchase to Hold On to 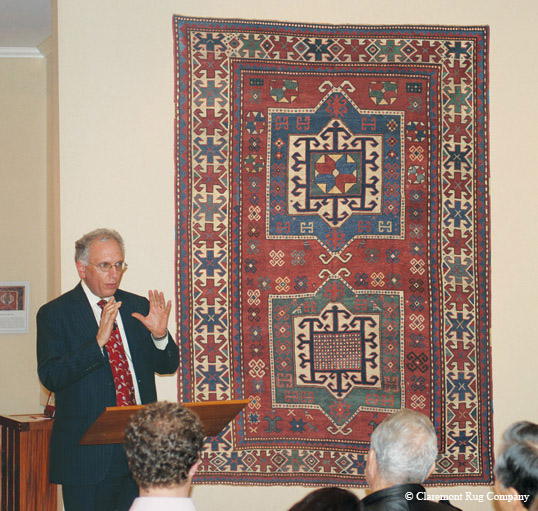 Above: Jan David Winitz, president of Claremont Rug Company, lecturing as part of a special exhibition on antique Caucasian rugs. Rug in photo: Caucasian Fachralo Kazak, 5ft. 4in. x 7ft 10in., circa 1825.

David Eckles and Allene Wong were interested in tribal and folk art, and initially thought about buying antique oriental rugs as an investment. But the more they learned, the more they fell in love with the art form.

“Tribal rugs are very personal, something that speaks to you from a distant culture and tells you what life was like more than a century ago,” says Wong. “They’re so alive, and they tell a story.”

The couple, who are retired, rotate 61 rugs, collectively worth $2.5m, throughout their three homes in Piedmont, California, and Hawaii, and have built a cedar-lined storage closet to protect the pieces not on display. Each of their rugs, including many museum-level specimens, is one-of-a-kind, woven in an isolated village using materials and techniques that cannot be replicated today. “I don’t just roll them up and place them in a vault,” Wong says. “They’re not purely an investment. We put our rugs on the floor and treat them as part of the family.”

In many ways, the coterie of antique rug collectors is the antithesis of those in the contemporary art market; they shun the press and conduct transactions behind closed doors. A handful of high-end dealers act as private consultants helping curate their clients’ collections. “Serious collectors are typically very private,” says Jan David Winitz, founder and president of Claremont Rug Company in Oakland, California, with whom Eckles and Wong have built their collection. “They enjoy the personal satisfaction of living with this timeless art stemming before the age of commercialism.”

Most existing antique carpets date from the 19th-century. “Oriental” refers to rugs handwoven in the East, from the Balkans into China, which are the product of a carpetmaking tradition dating back at least 700 years. Most were produced in Persia the Caucasus, Central Asia, Turkey, Afghanistan and China.

Oriental rugs are divided into three categories – tribal, city and village. Tribal rugs were woven by nomads or tribal people living in small encampments using motifs and methods particular to their ethnic groups. They were typically produced for personal use and are marked by abstract, totemic, spontaneous designs. City rugs, however, were often commissioned by aristocratic patrons and created by groups of weavers working from meticulous blueprints, or “cartoons”, conceived by a master craftsman. Weavers convened in workshops, primarily in Persia or Turkey, to create rugs known for their intricate, floral images. Village rugs form a bridge between tribal and city, blending geometric elements with rhythmic, regular patterns.

Winitz says that for the past year, many of his patrons – a list that includes more than two dozen members of the Forbes 500 wealthiest list – have talked about diversifying their assets. “Our clients are looking for a quiet, non-volatile way to invest their money. Rugs are a lifestyle investment with a different form of appreciation.”

While financial returns may not be buyers’ dominant motivation, all tout the enduring investment value of antique rugs. Many pieces remain in families for generations and come to market only when heirs, perhaps focused on sexier markets, decide to sell their antiques. Last month, Claremont Rug Company began selling a diverse 225-piece collection from a patrician family based in New York’s Hudson Valley.

Because truly rare rugs emerge so infrequently on the international market it is hard to track their re-sale value. And because the rugs were produced anonymously, collectors are unable to monitor comparable works by the same artists. But market insiders believe antique oriental rugs to be universally undervalued. “These rugs are phenomenal art, but they’re not priced anything like what they’re really worth. They’re not recognized yet,” says Jon Schreiber, a collector. For the past two decades he has specialized in world-class Caucasian tribal rugs. “Someday, not that far in the future, they’ll take off the way paintings have.”

Yet these “drought-like conditions” have caused prices to rise in recent years. “High-collectible and museum-level rugs are only a minute percentage of all rugs,” Winitz says. “The majority went into private collections between 25 and 75 years ago. We’re talking about a market where demand is much greater than supply.” Winitz says that during the past five years, many clients have become voracious about collecting, purchasing between 50 and 200 rugs each. But for now, antique rugs are generally priced lower than other art forms.

Antique rug dealers and collectors often wax lyrical about their esoteric pursuit, calling rugs time capsules, or a window into history. As opposed to contemporary artists’ desire to stimulate and shock, weavers once strove to express the harmony and grace they found in nature; they believed that art was a process in which each step – from raising sheep and shearing wool, to brewing dyes and tying each knot – must be perfected for the final product to reach its “ultimate state”. To modern acolytes, such rugs represent a return to the balance and simplicity of a lost civilization.

“These rugs represent artistic striving over a period of months or years, and the techniques are unchanged since biblical times,” Winitz says. “Our world has become so impersonal and highly technological. Our clients are looking for items that are original, elemental and are a part of the heritage of man. This is art of the heart, rather than art of the ego.”

Because fine distinctions in antique rugs are difficult to recognize, new collectors should work with established, reputable dealers.

Novices should also familiarize themselves with certain basic criteria to ensure their chosen rugs will appreciate in value over time. Make sure the rug you are considering: