When the Cabin Becomes a Sales Floor 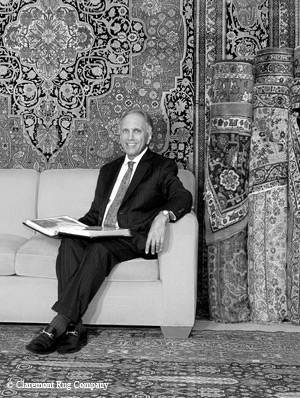 As the president of an internationally known antique Oriental carpet company, my clientele is elite and sometimes too busy to choose their carpets at my stores. So for almost 30 years, I have been flying to them to make my presentations.

I usually travel with three or four really strong young men. Their goal, once we get to our destination, is to maneuver sometimes as many as 45 bales of rugs out of the airport, into a truck and then on to our client presentations. A bale is simply a group of rugs wrapped together. The kicker is that each of them weighs 120 pounds or more.

It can be backbreaking work, and the days are long gone when I actually hauled those rugs into a truck. I am very thankful for those powerful, efficient guys who work with me.

When I’m not supervising the hauling of my wares, I use downtime on the plane and in the airport to catch up on paperwork and e-mail messages.

I also use this time to review and edit appraisals for rugs we’ve sold. When editing, I always have striking 8 by 10 photos of the rugs. These photographs invariably tempt my seatmates, flight attendants and strolling passengers, many of whom want to talk about antiques and art.

There seems to be something about airports that brings out the inner art collector in people.

This year, at the American Airlines Admiral’s Club at Washington Dulles, I was reviewing photos of several rugs for an appointment that day in Chicago.

A gentleman who was sitting near me asked to see the photos. He looked at several shots and then stopped at a photograph of a mid-19th-century Caucasian Lori Pambak Kazak, a rare tribal rug woven in the rugged Caucasus Mountains of Georgia.

He asked if it was already sold. I said no. And the next thing I knew, he was offering to buy it straight from the photo. Apparently, he was a budding collector who had been looking for a rug of this type.

I like talking about the rugs, but I must say it’s highly unusual for a stranger to buy a collectible 19th-century rug simply from a picture.

I have even made a sale in a parking lot of the private terminal at Oakland International when a client, who was on his way to Hawaii, stopped in his private jet to see our pieces — and then bought two of our rugs.

But you don’t have to be on airport grounds to make a sale. Sometimes my seatmates feel the urge to make a purchase, too.

On one trip, I ended up sitting next to a gentleman who had been thinking about purchasing antique carpets for his new home.

He described his spaces, and I helped him identify the styles he liked from the photos and catalogs I had in my carry-on.

The next morning, on my voice mail was a message from this gentleman sent at 2 a.m. He said he’d been on the Web site for hours and wanted to speak about furnishing not one, but two homes.

A week later, we flew to his home with 50 rugs. He wound up buying 18 during our 15-hour meeting, which began at 10 a.m. and didn’t end until 1 the following morning.

Many of my rugs were created by nomads 100 to 200 years ago. I often think these weavers would have gotten a kick out of how their artworks are now transported.

But sometimes I do think those nomadic weavers had it a bit easier. No security lines, flight delays or cancellations. Just an artist, his wares and a few good camels.

In my own way, I hope I’m carrying on the tradition.